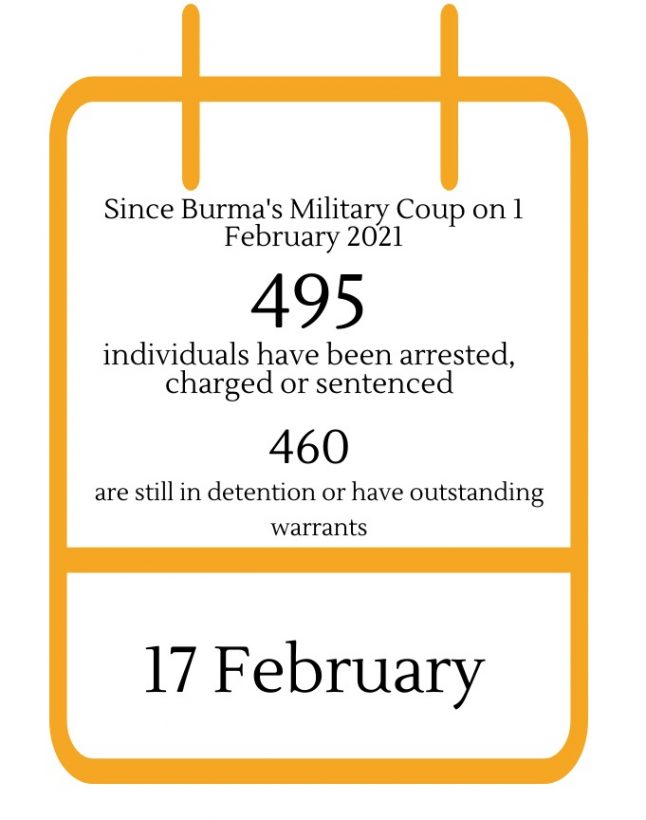 The general strike and civil disobedience movement continued to engulf Burma on 17 February. Hundreds of thousands came together across the major cities and small towns. Today, cars blocked roads at some major junctions across Burma, including Rangoon, delaying the military and police response to peaceful demonstrations. Peaceful protestors were therefore not as intimidated by military convoys.

On 16 February, 17 members of Committee Representing Pyidaungsu Hluttaw (CRPH) were issued arrest warrants and charged under Section 505(b) of the Penal Code, and Natural Disaster Management law in respective township courts. The CRPH was formed as the legitimate government after the military coup and calls on foreign governments to collectively recognize this.

Mandalay Region Minister of Natural Resources and Environmental Conservation, U Myo Thit, was arrested and prosecuted under Section 505(b) of the Penal Code for a statement declaring a public holiday for governmental departments in Mandalay Region until a new government officially elected in the general elections takes office. 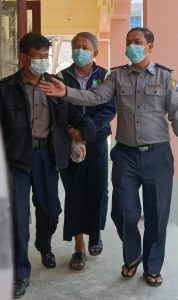 In Mandalay Town, four train drivers, U Zaw Ko Ko Maung, U Thant Zin and two others were arrested at gunpoint by the military and taken to the Mandalay locomotive factory. The victims were reportedly asked to drive to Myitkyna at night.

In a neighborhood in Chanmyathazi Township, Mandalay, at around 8.30pm last night, a military and police patrol invaded and destroyed a house who allegedly participated in the  “Drumming out the Evil” campaign, a man was as a result injured. In Toggok township, Rakhine State, three men protesting against the coup were arrested by the police this morning.

In addition, at today’s demonstrations while protestors against the coup were painting “WE WANT DEMOCRACY” on Pyimana-Taungnyo Road, the main road of Nay Pyi Taw, police ordered the crowd to disperse and destroyed the painting with water cannon.

As of February 17, a total of (495) people have been arrested, charged or sentenced in relation to the military coup on February 1. Of them, (3) were convicted; (2) to two years imprisonment and (1) to three months. (32) have been charged with warrant but are evading arrest (3) others have been charged but not detained, (35) were released. A total of (460) are still under detention or have outstanding charges, including the (3) sentenced.