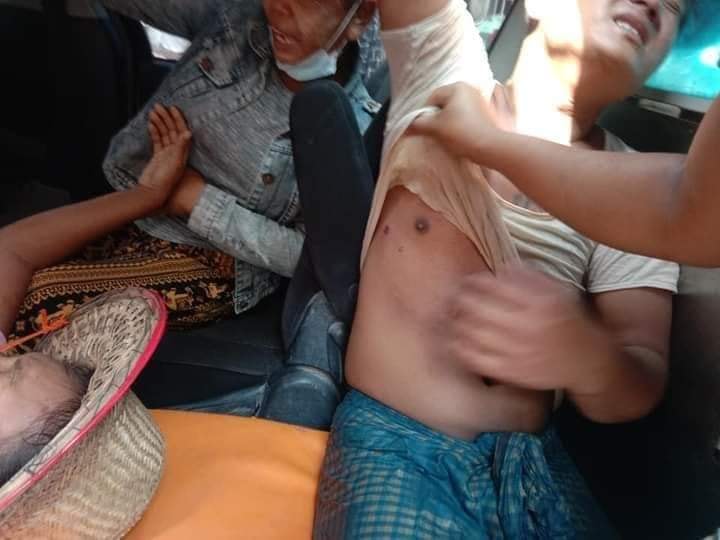 A second consecutive day of internet communication blackout was enforced over Burma in the early hours of 16 February between 1am and 9am. According to Net Blocks, which monitors internet services, connectivity had dropped to “15% of ordinary levels”. These blackouts disrupt communication and coordination among communities at a time of night-time raids and criminal mobs targeting residents. One of the fundamental rights of the Universal Declaration Of  Human Rights described, in Article 19, is the right to freedom of speech, “without interference and to seek, receive, and impart information and ideas through any media and regardless of frontiers”. This must be adhered to in Burma.

On February 15, the general strike continued undeterred. As the strike movement grows, arrests and violent crackdown have increased. Residences of civil servants are being raided everyday due to their participation in the Civil Disobedience Movement (CDM).

On February 16, Htet Wai Yan Kyaw, a primary school headmaster in Htaung Ka Loe Village, Myaungmya Town, Ayeyarwady Region, who participated in the CDM, was arrested by the police when on his way back from staging a protest. Approximately 30,000 people demonstrated in front of the Myaungmya Prison calling for his release. But the police brutally crackdown on demonstrators with water cannons, tear gas canisters and shooting rubber bullets. 10 civilians were injured and 2 civilians arrested as a result.

On 16 February, 4 youths who took part in a protest against the military coup were arrested by policemen in Thandwe Township, Rakhine State.

On the evening of 15 February, the police brutally beat an unarmed civilian in a crackdown on peaceful protesters demonstrating at a roundabout on the Yangon – Mandalay Highway in Mandalay City. A witness caught the attack of peaceful demonstrators by the coup authorities in public on video.

On 15 February, 18 people who contravened curfew were sentenced to one-month imprisonment in Davoy Township, Tanithary Region, said residents. This is the first sentence handed down after the military junta issued curfew order 144 For detentions in relation to the coup. As of February 16, a total of (452) people have been arrested and detained in relation to the military coup on February 1. Of them, (3) have been sentenced, 2 to two years imprisonment, 1 to three months, (35) were released. A total of (417) are still under detention, including the (3) sentenced AAPP will continue to keep you informed of verified daily arrests, charges and sentences in relation to coup, and update our lists to the details of these alleged offences.

If you receive any information about arrests/detentions of CSO leaders, teachers, activists, journalists, civilians, in relation to the military and police crackdown on dissent. Please submit to the Assistance Association for Political Prisoners (AAPP) main office in Yangon: