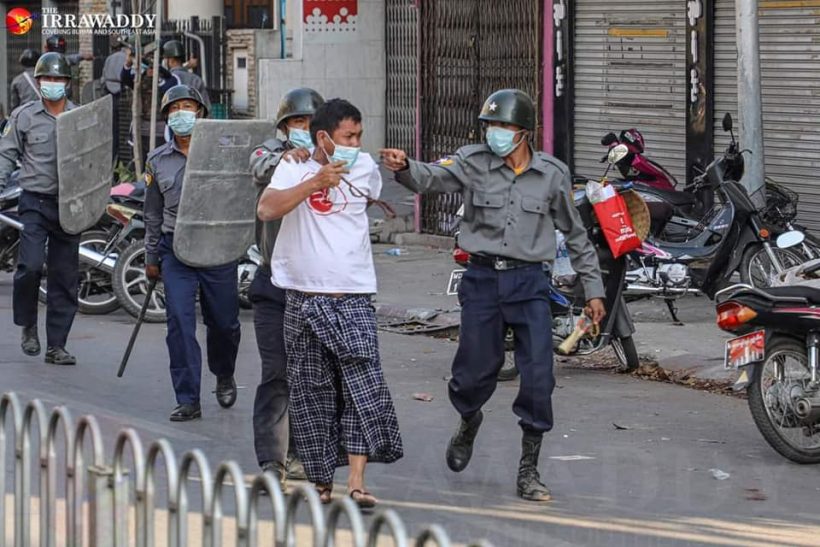 Yesterday, on 14 February the coup government passed the “Law Amending the Penal Code’ and  the ‘Law Amending the Code of Criminal Procedure’. The recently passed Acts amend multiple articles of the colonial-era Penal Code. The Penal Code was already the most common legislation used to target political prisoners prior to the coup. Civil society had wanted the archaic legislation reformed, it has now become more arbitrary.

The recent amendments will be aimed at the civil disobedience movement, changing the definition and charge of high treason as well as further persecuting public assembly and disseminating information.

Some of these amendments include Section 121 which essentially could criminalize requesting international aid and/or support. Also Section 124A was substituted to cover ‘spoken and written signs’ which bring ‘contempt’ and such to the Union. This could now include pamphlets calling the military an illegitimate ‘coup’, ‘junta’ ‘regime’. Amendments to Section 124C now cover the ‘sabotage or hinder the performance’ of military or police acts. This could be used against recordings of  “Drumming out of Evil” peaceful protestors when night-time raids are conducted, or when community groups try to protest arbitrary detentions, or when groups support public servants striking and taking part in demonstrations.

Amendments to Section 505A add several offences, such as spreading ‘fake’ news, or ‘fear’ amongst the public, as well as ‘agitate’ directly or indirectly a criminal offence towards a government employee. Also detailed was imprisonment terms, with Section 124A and C covering a maximum 20 year sentence and fine and Section 505A with a maximum three-year imprisonment and fine.

Today, protests against the coup erupted across Burma where people from respective regions peacefully demonstrated. Civil servants across the country including in Yangon, Mandalay cooperated increasingly with the civil disobedience movement (CDM). Despite tanks and military vehicles roaming the streets, demonstrations went on.

Along with the increased turnout for CDM at demonstrations, threats and restrictions also escalated. On 14 February, police coercively dispersed employees at the Mahlaukone Diesel Railway Repair Factory, Kachin State CDM staff in Bhamo District; and on 15 February, police and authorities raided the teacher and staff living quarters at the Myanmar Aerospace University, Meikhtila.

Furthermore, local residents demanded the police withdraw from  the Dabat substation in Mankin Quarter, Myitkyina township, Kachin State after the soldiers stormed the area. The soldiers later clampdown with gunshots at night, some residents were injured and six reporters were arrested. As of 15 February, the six reporters had been released after signing confessions.

Residents in Myeik township, Tanintharyi Region, report there was provocation by the police to cut electricity late at night. In Thanlyin, Yangon Region, there  was a fire in a residential area due to an arson attack (‘a fire ring’).

On 15 February from 1:00am to 9am, internet connection was shut down under military directives. There is suspicion this blackout was to commit unjust activities including arbitrary arrests. Also today, in front of the NLD headquarters, the police attempted to raid the offices and blocked roads. However, they withdrew after a two hour-long demonstration by the people.

On February 15, the police force dispersed with violence, threats, and arrests, peaceful protestors in Mandalay City, the security forces beat, arrested and shot gunfire towards peaceful protestors demonstrating in front of Myanmar Economic Bank 1. Six people including two girls aged 17 were arrested. Subsequently, the  reporters reported at the event were brutally beaten by security forces.

What is more, the police force arrested and detained 14 high school students of Nay Pyi Taw B.E.H.S (14) who were peacefully protested, who were thereafter released in the evening due to a collective demonstration by the general public. Four students from Kengtung town, Shan State, were arrested. U Htay Naing (a.k.a Naing Gyi), a strike leader from the 2007 Saffron Revolution, from Pathein township, Ayeyarwady Region, was also violently arrested.

If you receive any information about arrests/detentions of CSO leaders, teachers, activists, journalists, civilians, in relation to the military and police crackdown on dissent. Please submit to the Assistance Association for Political Prisoners (AAPP) main office in Yangon: