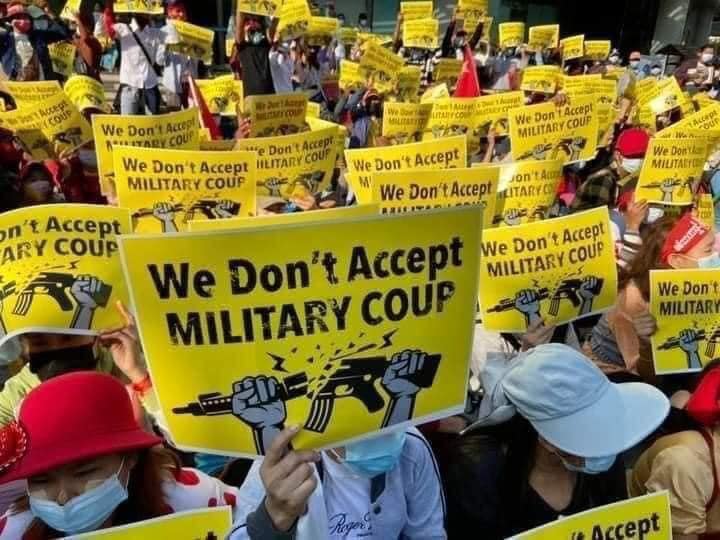 Mass demonstrations against the junta continued this Saturday, on the thirteenth day since the illegitimate coup by the military. There was a ten-minute silence of respect for the day of independence hero General Aung San birth, father of currently-detained State Counsellor Aung San Suu Kyi at some demonstrations. More and more sections of society are coming together, a number of demonstrations were hundreds of thousands in size around the country, peacefully fighting for democracy.

On 12 February, a man was injured in a brawl between a pro-military group and peaceful demonstrators in Meiktila Township, Mandalay Region.

But whilst the peaceful intentions of the civil disobedience movement is well known, there are disturbing reports of instability caused by violent mobs. There is historical precedent for instability being fomented across Burma. Some arrests were made by community groups in response.

On the same day as mobs were committing violence in communities, the police force conducted night-time raids on individuals allegedly associated with the civil disobedience movement. These arbitrary arrests are happening at night, and in violation of domestic law, but the civil disobedience movement was successful. In Sanchaung Township, Yangon  for example, residents “Drummed out the Evil” using pots and pans to make loud noises in groups when they thought police units were conducting raids to arrest people. There is also a video of residents in Kyeemyindaing Township, Yangon, gathering together in their hundreds to demand the release of a teacher reportedly detained.