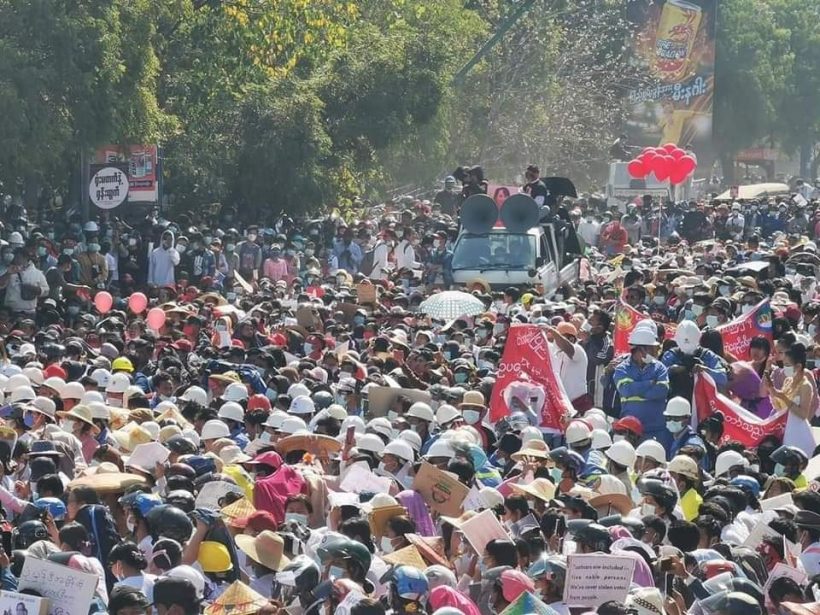 Protests continued to intensify on the 11th day since the coup, mass demonstrations today comprised civil service staff from education, health, postal, and municipal departments, as well as many others.  Protesters were verbally warned  in some places by police and officials of township general administration departments and some demonstrations were not permitted beyond a time limit imposed by the authorities.

Since the coup, leaders of some political parties, activists, and CSOs have continued to be arrested. Arrests accelerated yesterday when chairmen and members of the Union Election Commission of each region and state were abducted in the night. (AAPP will continue verifying the names of UEC detainees in excel list tomorrow). Lawyer Kyaw Hoe, chief minister of the Shan State government Dr. Linn Htut who had been under house-arrest and other members of UEC comprised 28 persons arrested on the night of 10 February. Including vice-chairman of the Yangon Region’s Coordination Committee on COVID 19 Prevention, Control and Treatment Zaw Wai Soe who was detained but released after two hours of questioning.

On 11 February, five persons were abducted across the country, including prominent lawyer U Myo Aung in Myawaddy Township, Karen State.

The Transport and Communication Ministry of the so-called state administrative council, reportedly drafted a Cyber Security Law on 9 February which is in contradiction to the democratic process. The reported Cyber Security Law would be in direct response to the growing civil disobedience movement and a clear attempt to restrict Burma’s people’s freedom of expression, data protection and privacy.

One of the stated objectives of the so-called state administrative council on the 74th anniversary of the Union Day was: “to work for the emergence of a constitution that is in alignment and in harmony with the Democratic Federal Union”. This hints at their intention to renew a constitution which is more favorable to them than the 2008 Constitution, though this would be a shadow of real democracy.