(13/03/15): In light of the recent violent government crackdowns and mass arrests of at least 127 people in connection with the student protests against the National Education Law this week, the 2015 Palm Campaign will be extended until further notice.

To demand the immediate and unconditional release of the detainees (information on detainees here), please continue reading and follow the instructions further down on this page.

The Assistance Association for Political Prisoners (AAPP) and the Former Political Prisoners Society (FPPS) are urging the international community to call on the Government of Burma to unconditionally release all current political prisoners; put an end to the use of oppressive laws to harass, arrest and imprison activists; and enact real lasting judicial and legislative reform.

To show the government that the world stands in solidarity with Burma’s political prisoners and demands lasting reform, over the coming weeks we will collect photographs of our supporters’ participation in our 2015 Palm Campaign. To demonstrate the international community’s widespread call that the Government of Burma demonstrate the will to meet the demands of this campaign, the photographs of support will be showcased at an exhibition in Rangoon (date to be confirmed).

Why Does It Matter?

The steady rise in the number of political prisoners in the last year makes clear that the government is increasingly cracking down on fundamental freedoms in the run up to the 2015 election. As of March 2, 2015 there are 170 political prisoners in Burma’s jails, with a further 238 activists awaiting trial.Despite this, the government remains unwilling to officially recognize their continued existence. There is a widespread belief that reforms in Burma have stalled, and the alarming political prisoner situation is demonstrative of the government’s backsliding on the supposed transition to democracy. 2015 marks a critical period for Burma’s burgeoning democracy; it is crucial that the international community puts renewed pressure on the government to fulfill its commitments to a democratic future.

What Can You Do?

Show the Government of Burma that you stand in solidarity with the political prisoners and demand lasting reform by participating in our 2015 Palm Campaign. Simply follow these steps: 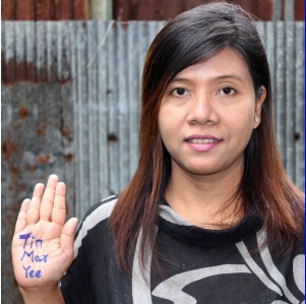 All of the photographs collected thus far can be viewed on our campaign Instagram page. For more information on our campaign, or about AAPP, email us at [email protected]