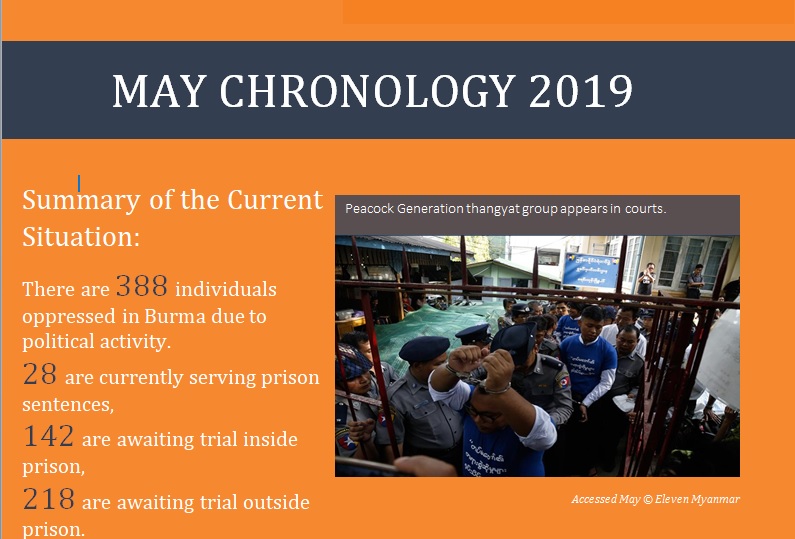 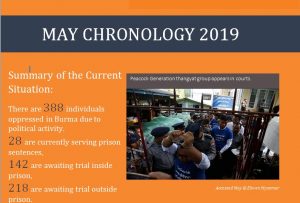 May Month in Review

After the third presidential pardon in May, inmates in seven prisons – Shwebo Prison, Maw Lite Prison, Hpa-an Prison, Myitkyina Prison, Tharyarwaddy Prison, Tavoy Prison, and Pathein Prison – rioted. The riot in Shwebo prison became particularly violent when security personnel shot tear gas and fired their weapons at the rioting inmates, which resulted in the death of four unarmed inmates. As prisons are controlled by the Correctional Department which is run by the Ministry of Home Affairs, the Ministry of Home Affairs and the Correctional Department have the responsibility for the deaths of the rioters. The riots were related to the lack of transparency regarding the Presidential Pardon. There are prisoners who were not released under the pardon, despite fellow prisoners being released despite having committed the same office. Further, the Presidential Pardon is taking unilaterally and there is no external scrutiny of the release list before it is announced.  As such, and in order to prevent confusing and anger regarding future releases, an independent and free investigation commission has to be formed, clear guidelines regarding the selection of prisoners for release should be issued and a commission or committee should be set up to investigation of the deaths of the rioters. Furthermore, A Ministry of Justice should be re-established within Burma, and the correctional department to be transferred to being run under this MOJ as opposed to the military controlled MOHA.

Another major issues related to prisons is the poor physical and mental conditions of prisoners serving in prison labor camps. On May 21, Major-General said at the Union of Parliament that there is no plan to increase the one day pay rate for prisoner wages in prison labor camps from 250 Kyat in prison labor camps to 4800 Kyat per day, to be the same as workers outside of prison. While everyone has the right to equal wages, prisoners in prison labor camps have had their rights infringed and violated. In addition, as they are working in the prison labor camp, they do not have any opportunities to learn vocational skills which are beneficial upon return to civilian life. As a result, immediate and thorough prison reform is needed.

Freedom of speech is a basic human right and it has to be addressed to reform the country. Even though the international and domestic laws have enacted freedom of speech, Burma has continued to fail to respect and followed. Consequently, political activists, civilians, farmers, and workers in Burma face different oppressions. The last month saw many people across the country being charged for exercising this right.

Their have also been cases against those standing in support with those charged, such as in the case against Nilar Thein, Nan Lin, Naing Ko Thu, Min Han Htet, and Shar Yamone under Penal Code Articles 114, 186, 332 and 353, charged for a clash between the police and activists during the Peacock Generation Thangyat Troupe Performers’ court hearing. Worryingly, the government is using repressive legal mechanisms that were previously used by the former dictatorships.

Despite the release of Reuters reporters Thet Oo Maung a.k.a Wa Lone and Kyaw Soe Oo a.k.a Moe Aung, press freedom has continued to decline in May.

A message of greetings from President U Win Myint on the occasion of World Press Freedom Day Ceremony stated that “for the democratic system to be strong media freedom is vital.” Yet, today in Burma the oppressions of media continues, and thus weakens the  transition to democracy. Hence, the Assistance Association for Political Prisoners (AAPP) urges the government to release the journalists and reporters who are being arrested, charged and sentenced and work for genuine press freedom in Burma.

Arrests by the Ethnic Armed Organizations

Conflicts and human rights violations are connected and far too often, we see that when conflicts occur, the human rights of civilians have been violated. Indigenous people, who have been facing civil war for over 70 years, are far from achieving justice, reparation, and compensation, as the perpetrators of these crimes enjoy impunity. Therefore, the government must sign the United Nations Convention against Torture (UNCAT) and International Covenant on Civil and Political Rights (ICCPR) immediately. In May, MP Thandar from Eainme Township, Ayeyawady Region, submitted a proposal for the government to sign the ICCPR and parliament decided to discuss it. The Assistance Association for Political Prisoners (AAPP) welcomes this positive step and urges the government to sign UNCAT.

Even though Burma had already ratified the International Covenant on Economic, Social and Cultural Rights (ICESCR) back in October 2017, farmers in the country have not being able to enjoy these rights in full and are still facing abuse. In addition, the consequences of land confiscation and disputes that follow have meant that farmers are still facing arrests and charges. A small selection of these cases are listed below.