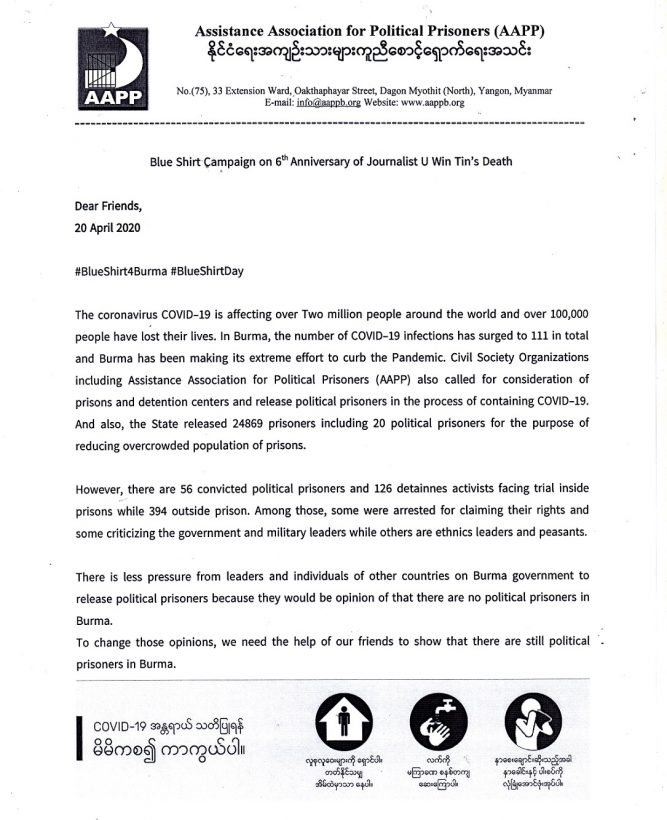 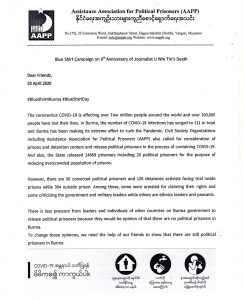 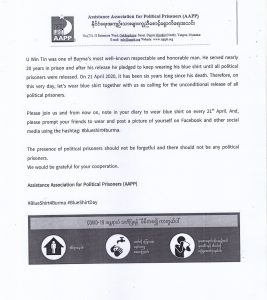 The coronavirus COVID-19 is affecting over Two million people around the world and over 100,000 people have lost their lives. In Burma, the number of COVID-19 infections has surged to 111 in total and Burma has been making its extreme effort to curb the Pandemic. Civil Society Organizations including Assistance Association for Political Prisoners (AAPP) also called for consideration of prisons and detention centers and release political prisoners in the process of containing COVID-19. And also, the State released 24869 prisoners including 20 political prisoners for the purpose of reducing overcrowded population of prisons.

However, there are 56 convicted political prisoners and 126 detainnes activists facing trial inside prisons while 394 outside prison. Among those, some were arrested for claiming their rights and some criticizing the government and military leaders while others are ethnics leaders and peasants.

To change those opinions, we need the help of our friends to show that there are still political prisoners in Burma.

U Win Tin was one of Burma’s most well-known respectable and honorable man. He served nearly 20 years in prison and after his release he pledged to keep wearing his blue shirt until all political prisoners were released. On 21 April 2020, it has been six years long since his death. Therefore, on this very day, let’s wear blue shirt together with us as calling for the unconditional release of all political prisoners.

Please join us and from now on, note in your diary to wear blue shirt on every 21st April. And, please prompt your friends to wear and post a picture of yourself on Facebook and other social media using the hashtag: #blueshirt4burma.

We would be grateful for your cooperation.