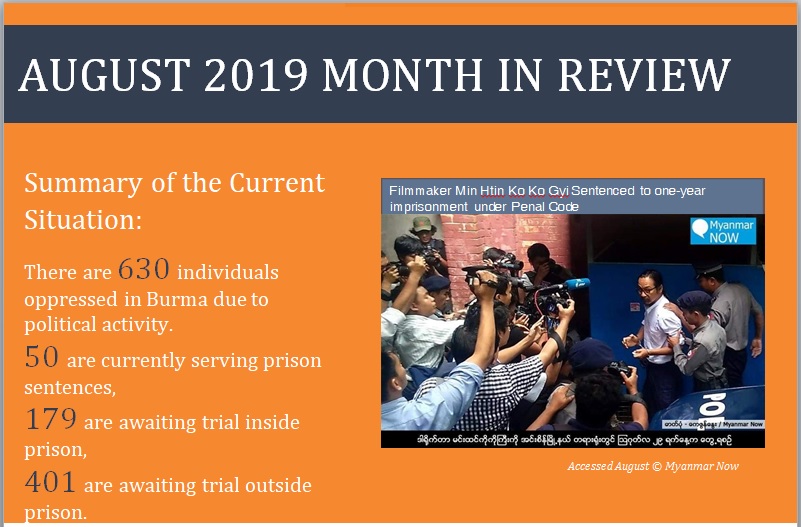 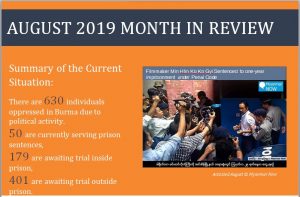 Since the beginning of increased clashes between the military and the Arakan Army (AA) in December 2018, there has been a significant increase in arrests, charges, injuries and deaths in the region. Moreover, across the country a huge number of civilians have been affected by ongoing conflict between the military and the northern alliance composing of the Arakan Army (AA), Myanmar National Democratic Alliance Army (MNDAA) and the Ta’ang National Liberation Army (TNLA) in Shan State.

In August, a total of 12 civilians from Maungdaw, Mrauk-U and Buthidaung Townships in Arakan State, including two teachers, were arrested on suspicion of association to the Arakan Army (AA). Four out of 12 have now been released and three have been charged under the Counter-Terrorism Law. Further, a farmer, who lives in Paung Myaung Village Tract in Mrauk-U Township where heavy fighting has occurred, has disappeared. A Rathedaung Township civilian had also been forcibly taken to serve as a guide by the Burma Army.

On August 15, the Northern Alliance started attacking six places including Nawngcho Township in Northern Shan State and the Defense Services Technological Academy in Pyin Oo Lwin in Mandalay Division. Following the attack, two brothers, Sai Khun Mai and Sai Lin Sink, both of whom are teachers at a free school in Kunhing Township in southern Shan State, were arrested over suspected involvement in the attack on the Defense Services Technological Academy.

As long as conflict, arrests, charges, sentences and torture in custody continues, there is little chance for national reconciliation. Even though the government held a number of Union Peace Conferences, the 21st Century Panglong Conference in August 2016, May 2017 and July 2018 to try and secure peace and national reconciliation, national reconciliation remains a distant hope. Besides, the government has continuously failed to show it is committed to the peace process and protecting the rights of its citizens by failing to follow Universal Declaration of Human Rights (UDHR), to ratify the the International Covenant on Civil and Political Rights (ICCPR) and the Convention against Torture and Other Cruel, Inhuman or Degrading Treatment or Punishment (UNCAT).

As the conflict drags on, civilians continue to pay the price and over the last month, civilians including children have been injured and killed due to the explosion of artillery shells, gunfire and landmines in clashes between the Northern Alliance and the Burma Army in the north of the country and the Arakan Army and Burma Army in Arakan State. As a result of conflicts in August, six civilians, including two children, died and a total of 17 civilians were injured in Arakan State alone. In the whole of the country, since the attacks by the Northern Alliance began in August 15, a total of 22 civilians were injured and a total of 14 civilians died. One of the most concerning aspects is the lack of responsibility and accountability of any armed organizations for the deaths of these civilians. All armed organizations must respect and follow the Geneva Convention and must protect its civilians. In addition, Burma has to follow, respect and protect the rights of the Convention on Child Rights (CRC) which was ratified on July 15, 1991. Despite Articles 38 and 39 of CRC iterating the importance of protecting children in armed conflict, a lot of children in Burma are victims of the armed conflict. Accordingly, we urge the government to consider how to address the issues of survival and secure of children in armed conflict and to ratify the Optional Protocol to the Convention on the Rights of the Child on the involvement of children in armed conflict.

Freedom of expression in Burma is declining. This is highlighted by a number of cases in August such as the case of film maker Min Htin Ko Ko Gyi who has been sentenced to one year imprisonment with labour under 505(a) of the Penal Code, university students Zin Min Phyo and Min Han Htet being sentenced to 7 days imprisonment under Section 19 of PAPPL and Min Thway Thit, Khant Min Htet, Sai Thu Won and Ei Thiri Kyaw sentenced to 10,000 Kyat fine under Section 19 of PAPPL (Min Thway Thit and Khant Min Htet were sentenced to 15 days imprisonment because they did not pay a fine). Three activists including the Chairwoman of the Karen Women Union Naw Ohn Hla had been charged under Section 20 of PAPPL for organising a Karen Martyrs Day event in Rangoon on August 12th. 16 members of the Ya Kha Taw Win charity group was fined MMK 10,000 for collecting donations without a permit. The continued decline in freedom of expression and restrictions on civil rights in Burma is incredibly concerning and has dire implications on transitional justice. The PAPPL, Section 500, 505(b) of the Penal Code, Telecommunication Law and Law Protecting the Privacy and Security of Citizens are pieces of outdated and repressive legislation used suppress civilians that have no place in a democratic society. As long as these laws remain in use and until they are amended or repealed, there is no hope for national reconciliation.

The prison sector is long over-due extensive reform, with the situation of over-crowding being particularly worrying. The Section 102 of the 2018 annual report of the Myanmar National Human Rights Commission (MNHRC) states that MNHRC had investigated 25 prisons and 25 prison labour camps in 2018 and that overcrowding was getting worse. Overcrowding in prisons violates the rights of prisoners and is a root cause in many unnecessary problems inside prisons. Accordingly, AAPP has repeatedly urged the government to immediately reform the prisons and review the 1894 Prisons Act and Burma Jail Manual in line with international laws and standards.

In August, farmers have been affected yet again by land confiscation. Some incidents which occurred in August are shown below;

Burma has already ratified the International Covenant on Economic, Social and Cultural Rights (ICESCR), but it is yet to live it to its legal obligations. Farmers have not received compensation, substitute lands or appropriate consultation and continue to face arrests, charges and sentences. Moreover such cases throw doubt over the governments commitment to land reform, as expressed in the August 2019 Land Acquisition, Resettlement and Rehabilitation Law. Accordingly, we urge the government to secure the land rights of all its citizens and ensure land reform is undertaken in line with domestic and international laws.