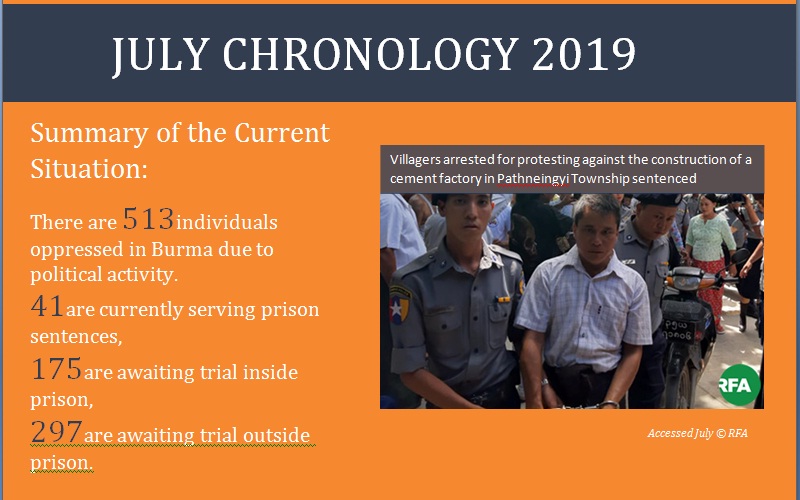 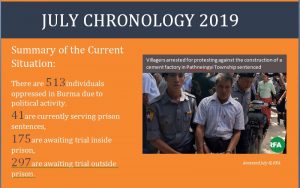 In July, fighting between the military and ethnic armed groups remained fierce. As a result, those who live the ethnic regions continue to face human rights violations. Some incidents which occurred in July are highlighted below;

Zaw Win Hlaing, a Shwe Tun Phyu Villager from Mrauk-U Township, Arakan State, was arrested and investigated for alleged ties to the Arakan Army (AA), died while he was receiving treatment at the Sittwe Hospital for injuries recieved from being tortured in military detention. Maung Zaw Linn, from Kyauktan village in Arakan State’s Rathedaung Township, died after being struck by a bullet fired by the Army.

Torture is a crime against humanity but the perpetrators are able to operate with impunity. As long as the government fails to ratify the United Nations Convention against Torture (UNCAT)these abuses are likely to continue happened. According to the documentation of the Assistance Association for Political Prisoners (AAPP) from the end of December 2018 to end of July 2019, there are a total of 15 Arakanese Ethnics who died while in military detention; some were shot by the Army, and some died following their tortures. The Military’s True News Information Team announced that it is forming an investigation team to probe the deaths of civilians held in custody during the army’s clearance operations against the Arakan Army (AA) in Arakan State. AAPP welcomes the investigations and urges that these investigations are to be independent and transparent. In addition, we urge the government to bring justice for those who died in custody due to beatings by the police. Code of Conduct for Law Enforcement Officials outlaws the use of torture. Accordingly, we urge the members of organizations who holding power to secure the rights of civilians by respecting and following domestic and international laws. Moreover, MP Ye Htut of Upper House urges the parliament to take action effectively against police members who are being violated the human rights at the meeting of the parliament. Therefore, AAPP urges the government to address these issues immediately..

Among the conflicts, arrests and charges have continued unabbated.

Prison overcrowding and insufficient medical healthcare has continued to be an issue throughout July. The Myanmar National Human Rights Commission (MNHRC) had investigated Shwebo Prison and Monywa Prison in June and released their findings in July. MNHRC recommended that prisoners in Shwebo Prison in Sagaing Division should be allowed to take a shower daily as they are currently only allowed to take a shower once every four days. Other recommendations include being given the wooden beds to sleep on as opposed to the floor, and ensuring that officers and officials supervise the healthcare officials to ensure the prisoners receive sufficient medical healthcare. On July 20, Prisoner Ye Lay a.k.a Myae Lay of Yin Nyein Production Camp in Paung Township, Mon State, died while he was labouring at the camp. He fell down a mountain while breaking rocks at the labour camp. A report submitted to the Pyidaungsu Hluttaw by MNHRC, surveying 105 children living at Hnget Aw San Youth Rehabilitation Centre, Thanlyin Youth Rehabilitation Centre, and the Vocational Training Centre for Women, discovered most were tried without a lawyer. Only 41 youth had a lawyer and 1 had a prosecutor, the rest faced trial without representation.

The Standard Minimum Rules for the Treatment of Prisoners (SMRs) provides guidelines on how to treat the prisoners and the government needs to respect and follow these rules and to train the respective officials to understand these rules. Moreover, the government should review and evaluate the recommendations of the organizations working on the prison issues. We urge the government to protect the rights of the children who are serving prison sentences and facing trial as Burma had already ratified the Convention on the Rights of the Child (CRC).

Land issues are still unsolved in Burma. In July, Artillery Battalion 360 arrested three farmers from Dawsohay village in Demoso Township in Kayah State for trespassing on their land which had been confiscated lands, they were later granted bail from the Demoso Myoma Police Station. The Military had filed charges against eight farmers from Phaung Taw Myay Ni in Pyin Oo Lwin Township, Mandalay Division under Section 427 and 447 of the Penal Code for cultivating their confiscated lands. The military shot farmers while they were going to the farms to cultivate at Htate Wa Pyin Village and Yote Chaung Village in Mrauk-U Township in Arakan State. No. 539 Light Infantry Regiment, has banned farmers in Pabechaung village Kyauktaw township from cultivating 300 acres of their land. As long as farmers suffer from land confiscation and land disputes they will face challenges in securing their livelihoods. Therefore, we urge the government to immediately implement the rights and the benefits of farmers who face struggles due to land confiscation and face restrictions