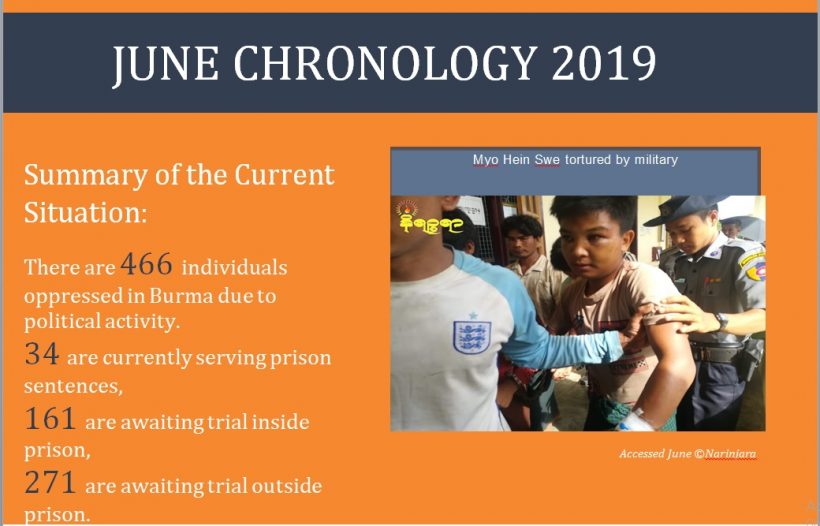 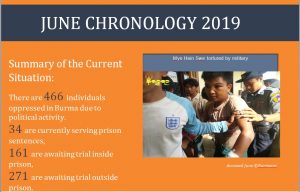 International Day in Support of Victims of Torture

June 26 is the International Day in Support of Victims of Torture; however in Burma, people who have been tortured have received neither  compensation or support. Furthermore, torture is continuing across the country. Meanwhile the perpetrators of such torture enjoy impunity as most of them are in positions of power. As a consequences of the continued conflict between the military and the Arakan Army(AA) in June, a worryingly high level of ethnic people have been arrested and tortured.

In addition, civilians in other parts of the country are still suffering torture at the hands of the States security forces. Sai Htun who works in China but lives in Shan State’s Hsenwi Township, was severely injured when he was arrested and beaten by the Muse Police while he queueing at the border gate. Tun Myint Win a.k.a Ko Tun, Aung Tha Pyay Villager in Patheingyi Township, Mandalay, who was arrested and charged for accused of staging a protest against a coal-fired cement factory, died due to injuries received while in police.

Torture is a serious human rights violation and a crime against humanity. Accordingly, it is essential to introduce transitional mechanisms for those who had suffered the from torture. Reparation and rehabilitation is required for transitional justice to be achieved. As long as there is no justice for survivors, true national reconciliation will not be obtained. As such, the government should work to create and enact a compensation law for victims. Moreover, actions should be taken against perpetrators and impunity should be ceased. AAPP also urges the government to ratify the United Nations Convention Against Torture (UNCAT) immediately.

When these conflicts have occurred, the indigenous people have suffered the most. Following a rise in the conflict between the Burma Army and AA, arrests, charges, killings and injuries in Arakan State have risen concurrently. Therefore, we urge the government to implement the peace process immediately and to end the conflict.

The number of human rights violations committed by Ethnic Armed Groups is also alarming. In June, the Arakan Army arrested Monk Nanda Marla and Mae Ma Chay, who are from Yey Soe Chaung Village under suspicion of them being informants to the military and forced them to marry. The Arakan Army arrested Sein Tun who lives in Thayet Thapin Village in Kyauktaw Township in Arakan State and who is working for the head of forestry in the Forestry Department. The Zomi Revolutionary Army (ZRA) sent a letter with bullet to Than Swang who has been accused of illegal mining in Kalay Township, Tedim’s Mwetawng area, Sagaing Division and they will take ‘revolutionary procedures’ if he is caught mining there again. Karen National Union/Karen National Liberation Army(KNU/KNLA) confirmed that they arrested an administrator and five Ten/Hundred Household Administrators from villages in Mi Zine Village Tract, Hpa-an Township in Karen State on June 18. These armed groups opposed and fought against the dictatorship and should therefore cease the kind of actions and abuses of power they fought the military to stop. Moreover, they must protect the indigenous people who are targeted by both ethnic armed groups and the military.

As demonstrated by the above incidents, the conditions of freedom of speech in Burma is worrying. Sections 18, 19 and 20 of PAPPL, Penal Code 500, 505(a)(b) and Section 10 of the Citizens Privacy and Security Law become the favored laws and tools of the government to prosecute activists, which has had a disastrous effect on freedom of speech.

Throughout June farmers, land rights activists and civilians have faced more restrictions due to land confiscations and land disputes. In June, the military filed charges against a total of 50 farmers, three reporters and one activist.

Prison reform is long overdue in Burma, yet there have been some small developments in June. A new family visiting centre in Insein Prison was opened on June 23. Furthermore, according to the Correctional Department, a total of 171 inmates across the country took the 2018-19 matriculation exam and 94 inmates out of 171 passed, with a percentage of 54.97%. Therefore, the pass percentage has risen compared to the previous year. Even though AAPP welcomes the progress in prison reform, prisons in Burma are still facing high levels of overcrowding. Yu Lwin Aung, member of the Myanmar National Human Rights Commission (MNHRC), has stated that three prisons in Northeastern Burma – Myitkyina, Lashio and Nyaungshwe – are operating at triple their capacity. MNHRC also stated that three other prisons have exceeded their capacities by more than 100 percent, two prisons have exceeded theirs by more than 90pc, two have exceeded theirs by more than 50 pc, and three have 40 percent more prisoners than they were designed for. On June 3, Deputy Minister of Ministry of Home Affairs, Major General Aung Thu, said at the Pyithuhluttaw, Ministry of Home Affairs is planning to start implementing the parole syste, and the ministry has started drafting a bill for monitoring the inmates released under the parole system. After the enactment of this law, the ministry will implement it in accordance with the law.

As prison overcrowding is a serious human rights violation, we welcome these positive steps in prison reforms. AAPP also frequently urges the government to reform the prisons. Moreover, AAPP has previously released many reports in regards to the prison reforms. Therefore, to fully achievement of the human rights of prisoners, we urge the government to continue to reform the prisons immediately without any further delays.