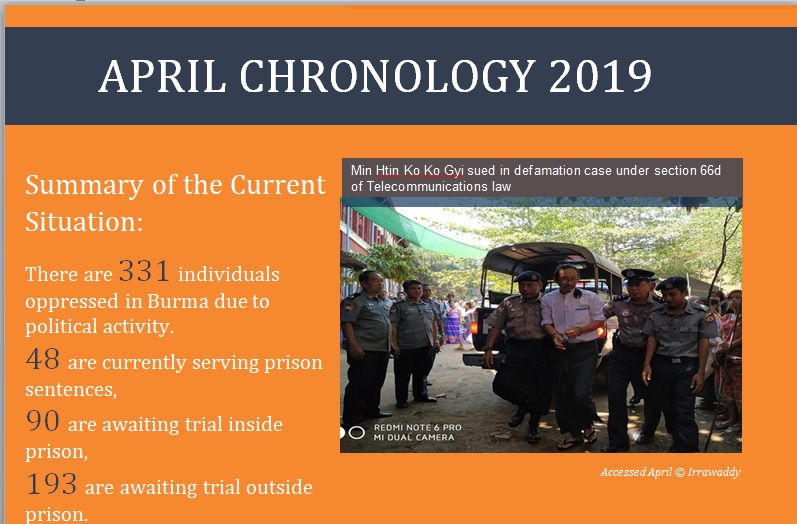 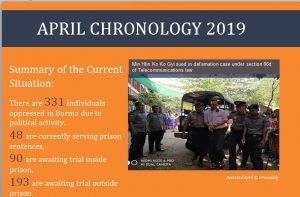 Inmates at Shwebo Prison and Mopalin Labor Camp have staged protests and called for equality in Aprils presidential pardon. Moreover, prisoners at Sittwe Prison staged a demonstration against not being included in the pardon. Therefore, AAPP urges the government to form the prisoner scrutiny committee including different organizations so as not to occur the unnecessary problems, corruption and in order to be transparent.

Conditions in Prisons and Detention Centers

Torture  has long been present in prisons and detentions centers in Burma. Moreover, control, it is extremely difficult to obtain fair justice for prisoners after such abuses are carried out.

1.Bilar, who is serving a prison sentence in Myaung Mya Prison in Irrawaddy Division had tried to stop prison staffs from beating another prisoner in relation to drugs been thrown into the Myaung Mya Prison. As a result he was filed under Section 294 and Section 353 of the Penal Code and was sent to solitary confinement and kept in shackles for 14 days. Therefore, his wife Aye Thandar Maw, submitted a complaint to the Myanmar National Human Rights Commission (MNHRC) on April 2 and MNHRC member Yu Lwin Aung said they will investigate this case soon.

Tortures is a violation of human rights and degrades the dignity of humans. Ending torture in prisons is essential. The Assistance Association for Political Prisoners (AAPP) welcomes that fact that the MNHRC has addressed the above issues. During the government’s three years of reform processes Ministry of Home Affairs, Acting Permanent Secretary U Khaing Tun Oo delivered instructions regarding the interrogation of suspects according to law and without mistreatment or torture. Moreover, we urged the prison department to respect and follow as the Basic Principles for the Treatment of Prisoners, Standard Minimum Rules for the Treatment of Prisoners, Convention against Torture and Other Cruel, Inhuman or Degrading Treatment or Punishment, Universal Declaration of Human Rights (UDHR) and International Covenant on Civil and Political Rights (ICCPR)

Doctor Aye Maung and Writer Wai Hnin Aung, who are serving 20 years imprisonment, were transferred from Sittwe Prison to Insein Prison without their families being informed. Political prisoners are often transferred from their local prison to one that is far from their hometown. AAPP urges the government to end this practice.

Freedom of Speech and Press Freedom

In April the situation regarding freedom of speech has continued to. This is extremely concerns for the national reconciliation. In April, activists, civilians and students faced oppression and were charged and arrested for exercising their freedom of speech, and their democratic and basic human rights.

A total of seven people had been charged under Section 505(a)(b) of the Penal Code by military in April and all these people had been denied bail. Freedom of speech is under attack by the widespread use of Section 505(a)(b) of the Penal Code, Section 66(d) of the Telecommunication Law and the Peaceful Assembly and Peaceful Procession Law. Hence, the Assistance Association for Political Prisoners (AAPP) urges the government to protect the freedom of speech in accordance with 2008 Constitution and respect international conventions which are protected the freedom of speech. Furthermore, we urge the government to promote the rights of citizens by amending or repealing the oppressive laws.

Worringly for National Reconciliation, Press freedom has continued to deteriorate alongside Freedom of Expression. In the 2019 World Press Freedom Index, Press Freedom of Burma has fallen one place since 2018. It also highlights that the Supreme Court had rejected the appeal of two Reuters reporters. Further, the military’s Rangoon Region Command filed the case under Section 66(d) of the Telecommunication Law  against the Irrawaddy news agency’s Burmese edition editor U Ye Ni at Kyauktada Police Station in April. Brigadier General Zaw Min Tun, a military spokesman, said they directly filed a complaint under section 66(d) instead of the News Media Law, as the News Media Law has a lesser sentence . Here, the use of other laws which carry heavier sentences is an effort to control the writing and publication of sensitive stories. Accordingly, the Assistance Association for Political Prisoners (AAPP) urges the government to drop the charges against media, release journalists and reporters and protected the media sector in Burma.

Furthermore, media outlets have been threatened by the armed organizations. Prominent news organizations in Burma have received threatening messages from unknown senders warning them not to refer to the Arakan Army (AA) as an “insurgent group.” As media facing sensitive conditions are still under threatening, we suggest the government to address this issue immediately.

In April, ethnic minorities and civilians are continued to be arrested, charged and sentenced due to accusations of association with unlawful organizations. Besides that, ethnic minorities have died and been injured as a result of conflicts between the military and ethnic armed groups. Torture is still being used for investigations and some people died during this torture. This has been occurring for decades and there is no justice for victims. The cases below in April show this dire situation.

In April, 27 villagers from Letkar village in Mrauk-U Township, Arakan State, had been arrested by the military and three out of 27 villagers had died during the militaries investigation. Military spokesman Brig-Gen Zaw Min Tun acknowledged to The Irrawaddy that the three men died during detention, saying that the causes of death were heart attack, suicide and drug addiction withdrawal, Four Letkar Villagers and three Lay Nyin Taung Villagers in Mrauk-U Township, Arakan State, were arrested and taken as  to serve as guides for the military. In the afternoon of this day, four Letkar villagers were released and the other three Lay Nyin Taung Villagers are still in detention.

On April 30 the government’s National Reconciliation and Peace Center (NRPC) and the four-member Northern Alliance comprising the Kachin Independence Army (KIA), Ta’ang Nationalities Liberation Army (TNLA), Arakan Army (AA) and Kokang’s Myanmar National Democratic Alliance Army (MNDAA) held peace talks. We welcome these positive discussions. On the other hand, the government must sign and ratify the Convention against Torture and Other Cruel, Inhuman or Degrading Treatment or Punishment (UNCAT) and International Covenant on Civil and Political Rights (ICCPR) to protect it citizens’ safety and freedom.

Farmers continue demand the return of their confiscated land, however, they face the loss of their land rights. Therefore, the government needs to address the land issues occurring across the country and respect the International Covenant on Economic, Social and Cultural Rights (ICESCR) that has already been signed and ratified by the government. The issues of military confiscated lands continues. Approximately 200 farmers from Lashio in Shan State and 50 farmers from Mae King Kone Village, Patheingyi Township in Mandalay Division, staged demonstrations to get back land confiscated by the military. Approximately 100 farmers from Si Thar Yar Village, Patheingyi Township in Mandalay Division, staged a protest to give back their 80 acres of lands which were rented by the military. Even though seven officials of #360 artillery battalion wearing plaintiff clothes had prohibited farmers who were cultivating on their ancestral land in Demoso Township, Kayah State on April 20, farmers continued cultivation together. Locals from Lashio in Northern Shan State have faced trouble because they were not allowed to go their land through military’s confiscated land.

Additionally, farmers also continued asking for to return their lands confiscated by the governmental departments. Farmers from Sule Kone Village Tract in Kyause Township, Mandalay division held a ‘plough protest’ to demand the return of their lands. A conflict occurred between authorities from agricultural department and farmers who stay on their confiscated land near Bu Kone Village, Kanbalu Township in Sagaing Division. State Counselor Aung San Su Kyi said the government is working to return confiscated lands to the original owners immediately. We urge the government to address the confiscated land issues effectively and immediately to protect the land rights of Burma’s farmers.