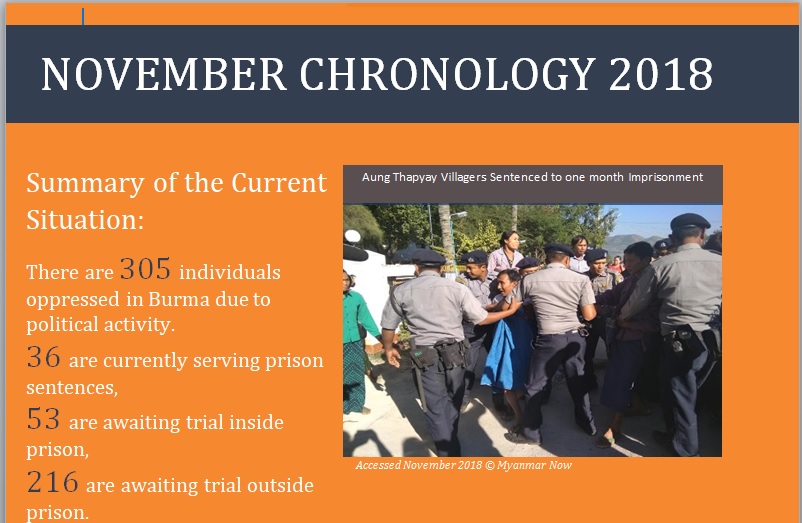 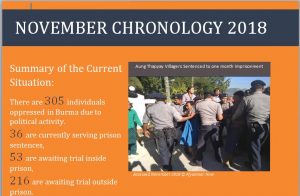 This month the repressive Unlawful Association Act continues to be used to oppress civilians as these cases demonstrates. U Hla Tun Kyaw of Leik Ka Maw Village in Kyaukphyu township was sentenced to two years in prison by a local court in Rakhine State for launching a hot air balloon with a portrait of the chief of the commander-in-chief’s, Maj-Gen Tun Myat Naing, the Arakan Army (AA) on his birthday. In addition, Vice Chairman of All Burma Student’ Democratic Front (ABSDF), Aung Swe Oo, Captain Mg Oo and civilian Than Htike Aung were arrested and a lawsuit was filed under Section 17 (1) of the Telecommunications Law by Mohnyin Myoma Police Station, Kachin State for the reason that the three men went and stayed in the Kachin Independence Army (KIA) and Northern Command’s movement area without permission. This happened despite the fact that the ABSDF singed the Nationwide Ceasefire Agreement (NCA) since in 2005 and it was deleted from the list of unlawful associations. These arrests show that the Government has disrespected the NCA as well as threatens members of organizations which had signed the NCA. These actions only hinder Burma’s peace process. Additionally, it undermines beliefs of Ethnic Armed Groups (EAGs) which have yet signed the NCA. The article 8 (a) of the NCA states, “Free movement of unarmed troops is allowed in all areas except in security restricted areas”. Therefore, AAPP calls on the Government to immediate release unconditionally of all political prisoners who have been sentenced, charged and arrested under 17 (1),  in order to implement sustainable step for progress in the peace process and in national reconciliation. AAPP continues to urge the Government to repeal the colonial-era Unlawful Association Act which had been enacted in 1908.

In addition to this, it must be highlighted that ethnic people continue to disproportionately suffer arrests and torture during the conflict between Ethnic Armed Groups (EAGs) and the Military. These actions were often committed by the highest authorities. The following incidents show which were occurred in November.

Arbitrary arrests and tortures are in direct violation of individual freedom and human dignity. The safety Burma’s citizens will be continue to be threatened as long as no strict action against the perpetrators is taken. AAPP urges the Government to protect the freedom and safety of the citizens, as enforced in the Article 353 of the 2008 Institution, Articles 5 and 9 of the OHCHR, and Articles 7 and 9 of the ICCPR , “Nothing shall, except in accord with existing laws, be detrimental to the life and personal freedom of any person”.

Additionally, citizens continue to be concerned about the rule of law in the wake of incidents in ethnic areas.

Efforts for transitional justice within Burma are futile while the police continue to torture citizens under investigation. It is highly concerning that the police do not respect the law. Article 8 of the Code of Conduct for Law Enforcement Officials states that Law enforcement officials shall respect the law and prevent and rigorously oppose any violations of them. Sections 330 and 331 of the Penal Code relate to voluntarily causing harm to extort confession, or to compel restoration of property, action thus needs to be taken when police officials violate this section of the Penal Code. Furthermore AAPP urges the Government in order to provide victims with remedial services following arbitrary arrests and tortures.

Additionally, serious issues within the Burmese judicial sector remain. On November 16, Mg Aye Win of Sittwe Town faced a sentence of up to 30 years in prison by the Sittwe Town Court regarding three handmade bombs explosions in Sittwe Town, Arakan State. The Government did not enable the use of any witnesses related to the case and he was sentenced to serious penalties, according to the lawyer on the case, Aye Nu Sein. These cases are concerning, as the Supreme Court of the Union has been implementing the Judicial Strategic Plan (2018-2022) in order to enhance the provision of justice. Subsequently, AAPP urges the Government to be reconsidering the process followed in this cases, and provide free and independent investigations in order to conclude the weaknesses in the Judicial Sector.

PAPPL continues to be used against activists to restrict and oppress freedom of expression and workers are restricted and repressed by PAPPL in November. On November 9, four protest leaders were charged under Article 18 and 19 of the Peaceful Assembly and Procession Law for their participation in a sit-in protest by workers of the Panda Textile Factory in Sintgaing Township in Mandalay Region. The right to freedom of expression is the fundamental human rights and it is preserved in Article 354 of the 2008 Constitution. Therefore, AAPP urges the Government to implement the fundamental rights of its citizens by immediate releasing all prisoners who have been charged, sentenced by under the PAPPL and by amending PAPPL.

This month, land rights continue to be under threat as the government has added a new amendment to the 2012 Vacant, Fallow and Virgin Land Management Law (VFVLML), that will allow for a more complicated process for registering land as well as harsher punishments for those who violate the law. Locals are at an increased risk of being evicted from land they had traditional ownership off, and further criminalised for returning to their seized land. The amendments have updated fines, prison sentences for those who fall foul of this highly controversial law. This will greatly affect farmers, especially those in ethnic areas, who have previously relied on customary laws within their communities to register land and resolve disputes. Consequently, AAPP urges the Government to be considerate of the rights of indigenous people as well as the Intellectual Property rights by discussing them with locals and should also consider amending this law in order to ensure that the indigenous population, who have been facing threat of losing their land, will no longer suffer.
Disagreements over the return of, and compensation for, land previously confiscated by the military have led to more protests and arrests in farming communities in November:

The implementation of amendments that do not address the root problems within the 2012 VFVL, the difficulty in resolving past land confiscations, and the inability to provide appropriate compensations are reflective of how government efforts to address land rights issues have only left farmers further vulnerable to having their rights infringed. AAPP urges the Government to respect the agreement of ICESCR it signed to ensure the livelihood of farmers and the protection of their rights.