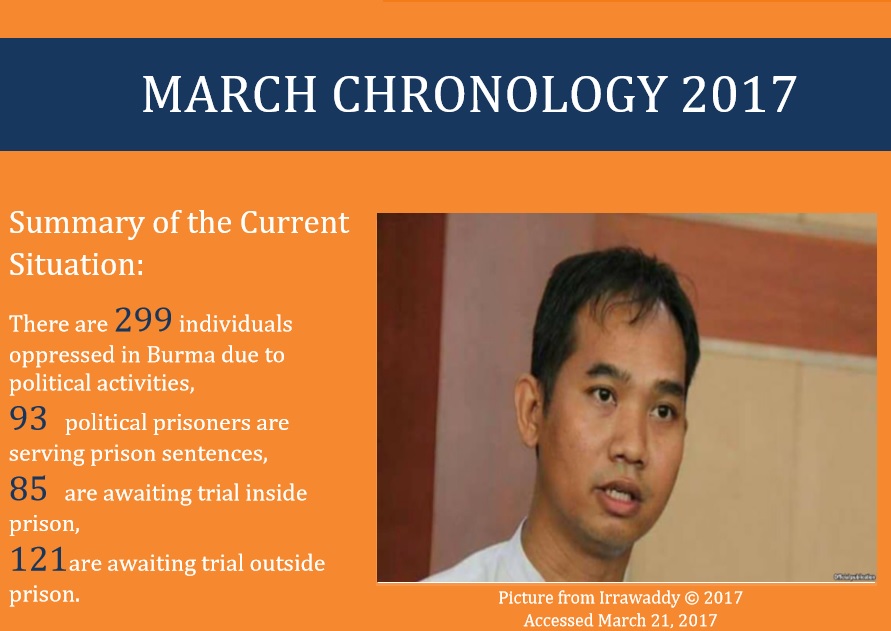 This month, 420 people were arrested. 320 of these were arrested by the Myanmar National Democratic Alliance Army, 91 by the Ta’ang National Liberation Army, and two by the Border Guard Force. In March, 80 people were charged, including four people under Section 66(d) of the Telecommunications Law, one individual under Section 500 of the Penal Code, and 50 individuals for protesting at the Letpadaung Copper Mine. In March, ten people were sentenced and four people are suffering from bad health in prison.

One year into the NLD-led government, the Government is facing its first unofficial annual review. Sky-high expectations and cautious optimism underlies the critiques on poor performance, critiques that were echoed by State Counselor Daw Aung San Suu Kyi when she urged the people of Burma to remain patient. AAPP understands and is, to a certain extent, sympathetic with the Government regarding the separation of powers, the entrenched military control, and the struggles inherited from the previous U Thein Sein Government which continues to undermine the democratization process. However, the inaction on the continued existence of political prisoners, and restrictions on civil and political rights is for AAPP unacceptable and AAPP hopes the Government will start to take some steps forward in their coming months. The people’s assessment of the party’s performance will be become apparent in the by-elections on April 1. Although the elections will not have a significant influence on the distribution of power in Parliament, it will gauge the public opinion.

Section 66(d) of the Telecommunications Law continues to be used as a tool to imprison individuals for defamation. Myanmar Now Chief Reporter Swe Win [pictured above] is being sued under Section 66(d) of the Telecommunications Law for allegedly defaming The Association for the Protection of Race and Religion (Ma Ba Tha) leader U Wirathu. He had stated in a Facebook post U Wirathu had transgressed the Buddhist monk code by publicly praising the murder of prominent Muslim lawyer and National League Democracy legal adviser U Ko Ni, and had refused to apologize to the monk. His refusal to apologize spurred U Wirathu to order Ma Ba Tha member Kyaw Myo Shwe to file a lawsuit under section 66(d). The issue stirred public debate, arousing discontent with Swe Win, especially from the members of the Patriotic Myanmar Monks Union (PMMU), as well as public support for the reporter. It is not yet clear whether the case will progress to court. AAPP predicts Ko Swe Win will be charged under a provision in Chapter XV of the Penal Code relating to offences relating to religion, most likely 295(a) or 298. We are closely monitoring this story and will report on exact charges when we have verified the information. AAPP believes that this case exemplifies how Section 66(d) is used to limit freedom of expression and condemns any charge against Swe Win on grounds of insulting religion with a statement denouncing violence.