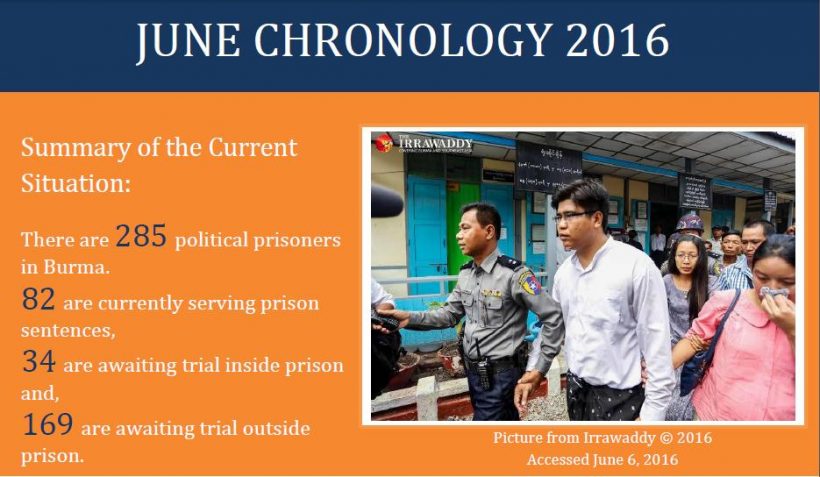 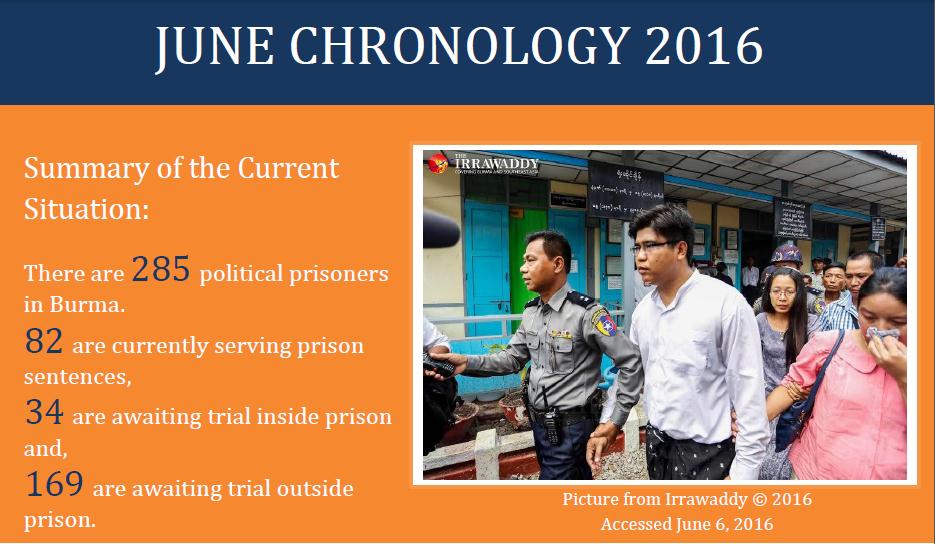 This month 112 civilians were arrested by State forces and ethnic armed groups, 48 of which were subsequently released, 18 individuals were sentenced and 5 were released. Three political prisoners are reported to be in bad health. Also this month, 34 activists, journalists and civilians were charged.
Authorities continued to arrest and detain activists under outdated legislation and threaten their freedom to peaceful assembly and expression. Fifteen of the 71 workers from Sagaing who were arrested following their peaceful protest march demanding better labor rights remain in detention facing charges under Sections 143, 145, 147 and 505(b) of the Penal Code. Having boycotted their hearings due this month, the trial threatens to drag on while they remain in prison. Sentences were handed to four men who had published a calendar depicting the Rohingya minority group. Former Saffron Revolution leader, U Gambira, was transferred to Insein Prison where he will face additional charges dating back to 2012. Land activists and farmers continue to fight the authorities over disputed land, with a number facing trial charged with trespassing and mischief.

June also saw renewed concerns about restrictions on media and civil society freedoms. Authorities moved quickly to prevent a movie being shown at a film festival apparently showing the Burma Army in a bad light and a civil society group were prevented from holding a press conference releasing a report about torture committed by state troops. In addition, journalists were banned from previously available parliamentary chambers and were denied entry to the ceremony marking Daw Aung San Suu Kyi’s 71st birthday.

The Unlawful Association Act continues to be a prominent tool for the arrest, detention and sentencing of civilians accused of affiliation with unrecognized organizations and ethnic armed groups. Thirteen Arakanese youths who were charged in May for alleged connections with the Arakan Army (AA) were sentenced this month under Section 17(1) of the Unlawful Association Act to three years of imprisonment with hard labor. Charges under the same Section of law were brought against a further thirteen civilians, while over a hundred arrests were made this month of civilians accused of connections with the AA, the Ta’ang National Liberation Army (TNLA), and the Shan State Army (SSA).
Moreover, while clashes in ethnic areas between the Burma Army and different armed groups continued throughout June, many severe human rights violations were reported. In Arakan State, two men were arrested in Buthidaung Township by an unknown group after a series of clashes between the Border Guard Police (BGP) and the AA. Later in the month, a BGP patrol group was accused of severely beating three fishermen without provocation. One victim died of his injuries. In Shan State, the Burma Army is accused of committing grave human rights abuses against civilians caught up in the ongoing conflict that involves a complex array of combatants and which is engulfing and destroying the lives of villagers. This includes the arrest of eight villagers in Theinni Township for allegedly collecting data for Shan State Progress Party/Shan State Army-North (SSPP-SSA) and the killing of seven villagers and injuring of three more civilians in Lashio Township.

Innocent civilians continue to be the victims of the actions of rival armed groups in Shan State. Renewed fighting between the Restoration Council of Shan State/Shan State Army-South (RCSS/SSA) and the TNLA has led to a series of arbitrary arrests and detentions, with the SSA arresting 40 local villagers from Mongton Township and the unexplained disappearance of seven ethnic Shan civilians on a road between Namkham and Lashio. Kachin Independence Army (KIA) troops arrested 48 Ta’ang farmers on disputed land in Kutkai Township and released them the following day on the condition that they would be shot if they returned.