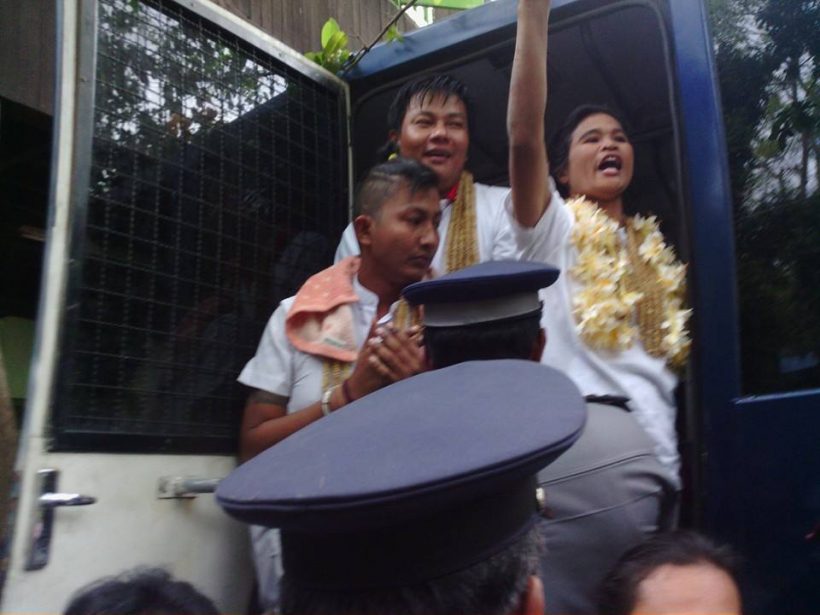 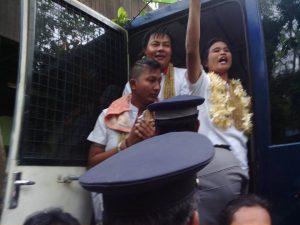 Summary of the Current Situation
As of the end of December, 81 political activists remained in prison, with 78 farmers in jail. 203 people are awaiting trial. As another year passes by the government‟s promise to release all political prisoners by the end of 2013 is once again left unfulfilled. This failed promise along with recent events such as the death of freelance journalist and protestor Daw Khin Win, and the continuous repression of the rights of activists and human rights workers along with the ongoing charging of land rights activists and farmers show December to have been a continuation of the previous months.
MONTH IN REVIEW
This month, 33 political activists were charged, 10 were sentenced and no political prisoners were released. Daw Khin Win, 56, was attending a protest of the Latpadaung Copper Mine, which is being developed by the Chinese company Wanbao Mining Ltd. Along with her death at least 10 other people were injured in the violence that occurred during these clashes.
This month saw the release of a report entitled Who Killed Ja Seng Ing by the Ja Seng Ing Truth Finding Committee, which includes eyewitness testimony of 16 people stating that she was killed by soldiers from the military Sut Ngai Yang village, Hpakant Township, Kachin State on 13 September 2012. The report urges the government to start an official investigation into her death and urges the cessation of the persecution of Breng Shwang, her father. The police have opened an investigation.
The Myanmar National Human Rights Commission this month released its final report into the death of freelance journalist Aung Kyaw Naing, also known as Par Gyi. In the report it was confirmed that he died due to gunshot wounds to several parts of his body, but it also states that there was no evidence of torture on his body, a statement that his lawyer, Robert San Aung, and the family reject. They maintain that an independent, transparent investigation needs to be initiated in order to uncover the full truth behind the events leading up to his death. In an open letter to the president, Par Gyi‟s wife points out differences in the original statement and the official report by “The original military report said Par Gyi was shot dead after he grabbed the guard‟s gun and ran away. But, the commission‟s report says my husband was shot dead as he wrestled with the guard, trying to snatch his gun; these sentences have different meanings”.
In a continuation from last month 29 activists have been charged for protesting the National Education Bill. 29 activists have been charged under Section 18 of the Peaceful Assembly and Peaceful Procession Act. The activists claim that they do not accept the charges against them and will not request bail or attend their court hearings. Instead, they call on the government to hold talks with them over the National Education Bill.
Farmers and land rights activists continue to be charged with varying crimes ranging from trespassing to obstruction. 14 land rights activists were arrested and charged under section 341 of the penal code for obstructing the sidewalk near the entrance of Rangoon‟s city hall. 54 farmers were charged with trespassing on land that had been confiscated by the army in 1992, but had been rented back to them until 2014 when it was once again confiscated.
(22 December 2014 – RFA) (2 January 2015 – DVB) (22 December 2014 -Irrawaddy) (6 December 2014 – Burma Partnership) (December 12 2014 – BNI) (3 December 2014 – The Irrawaddy) (3 December 2014 – DVB) (11 December 2014 – DVB) (15 December 2014 – Myanmar Times) (18 December 2014 – DVB) (17 December 2014 – RFA/Burmese) (23 December 2014 – The Irrawaddy) (19 December 2014 – The Irrawaddy/Burmese
For More Information
Assistance Association for Political Prisoners
Tate Naing    Secretary   +66(0) 812878 751
Bo Kyi     Joint Secretary   +95(0) 942530 8840