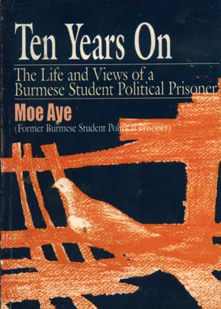 Moe Aye was born in Mandalay in 1964 and was a student at the Rangoon Institute of Technology throughout the 1988 pro-democracy uprising. During the uprising he joined the All Burma Federation of Student Union (ABFSU). He later joined the youth wing of the National League for Democracy (NLD), becoming in-charge of information in Botahtaung Township. On the morning of August 9, 1988, the army shot at him while he was demonstrating nears the Shwe Dagon Pagoda in Rangoon.

He was arrested by Military Intelligence on November 7, 1990. Moe Aye was charged under Section 5(j) of the 1050 Emergency Provision Act and was sentenced to seven years imprisonment with hard labour. At the time of his arrest, he was working for the ABFSU and was also carrying out duties for the NLD youth.

While in Insein Special Prison Moe Aye met Mr.James Leander Nichols and learned how the honorary consul to four Scandinavian countries was being questioned and beaten by November 22, 1996, and due to the harsh condition in prison he had to seek intensive medical treatment. Some six months later Moe Aye left for Thailand and is now living there. He is a regular correspondent for Democratic Voice of Burma (DVB), a radio station based in Oslo, and has articles regularly published in The Nation, a daily newspaper in Thailand.