Threats and Intimidation Towards Lawyers 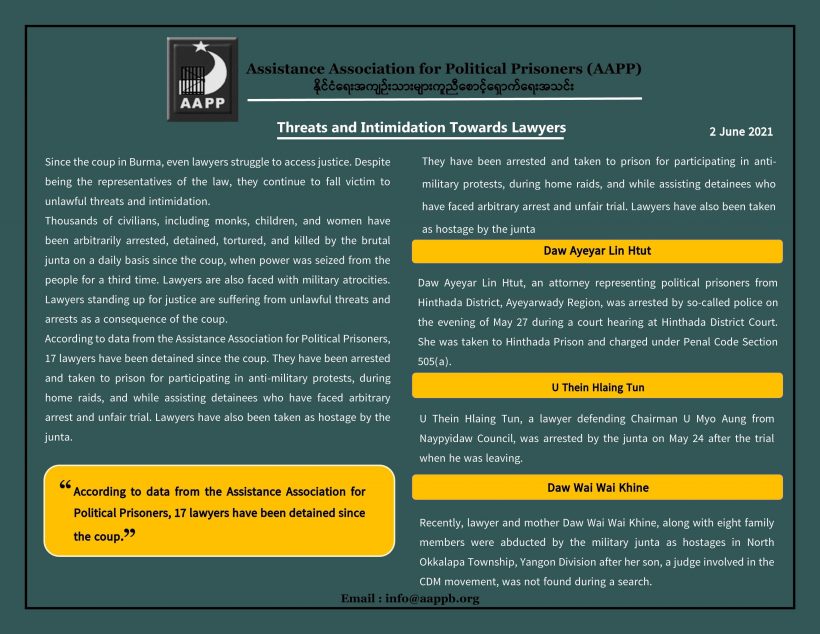 Since the coup in Burma, even lawyers struggle to access justice. Despite being the representatives of the law, they continue to fall victim to unlawful threats and intimidation.

Thousands of civilians, including monks, children, and women have been arbitrarily arrested, detained, tortured, and killed by the brutal junta on a daily basis since the coup, when power was seized from the people for a third time. Lawyers are also faced with military atrocities. Lawyers standing up for justice are suffering from unlawful threats and arrests as a consequence of the coup.

According to data from the Assistance Association for Political Prisoners, 17 lawyers have been detained since the coup. They have been arrested and taken to prison for participating in anti-military protests, during home raids, and while assisting detainees who have faced arbitrary arrest and unfair trials. Lawyers have also been taken as hostages by the junta.

The junta has continued to enforce a series of arbitrary arrests and unlawful prosecutions against civilians across the country. They then threaten lawyers who have then been assisting these innocent detainees. The intensity of arrests carried out by this terrorist junta is so high that lawyers have been unable, in some areas, to represent detainees at all.

Lawyers who have been defending the cases of political prisoners have been burdened with long waits to receive court hearing dates, without the precise time being given alongside them. The creation of special courts in prison has further decreased the ability to receive justice, as these courts are not public hearings. These courts also limit the ability to interact with the client and have restricted the questioning of clients.

Additionally, some clients have been beaten, tortured, and forced to make confessions before the hearing, making it near impossible for lawyers to obtain a fair trial. The ability to conduct a fair trial is a huge challenge for lawyers, as these courts are kept under constant watch by the junta judiciary and so-called police.

There has been a lack of coherent collaboration between the so-called police, who should be partly responsible for the rule of law, judges and prison staff. In addition to this, lawyers face clear biases against their clients, with case statements being only partially, or incorrectly presented. More importantly, the detainees’ human rights and defendants’ rights are being challenged, without any legal protection to defend themselves.In some cases, lawyers have been threatened with arrest, detention and prosecution under Penal Code Section 505(a). Many individuals who have been detained have completely lost contact with their families since the military seized power. Lawyers are vital for access to justice and in many cases are the only way the voices of those detained in horrific conditions in prisons can be heard. Even lawyers are being abducted and facing violence when trying to give essential legal services, a clear and damming violation to the rule of law.

A proper trial and defence are enshrined in the First, Second, Third, and Fourth Geneva Convention. The pinnacle of international law. Then there is the ‘Basic Principles on the Role of Lawyers’ passed by the UN Congress in 1990, which explicitly lays out the right of detainees to access lawyers and legal services. A right systematically denied by the junta. Lawyers are unable to see their clients, charges filed, evidence before court, or set dates for trial.

One of the few international instruments which cover the legal profession, it is an adopted norm which entails obligations for a state. The junta has abrogated responsibility as a member of the international community.

The Spring Revolution is supported by the entire population, and everyday civilians are being terrorized. But a methodological suppression of lawyers, teachers, and doctors, students must be understood. Lawyers fulfil an essential function in any society. AAPP believes this junta is trying to detain, torture, and kill critical thought, just as other genocidal dictatorships have done. A junta engaged in these crimes cannot be considered for a seat at the UN General Assembly in the coming session.