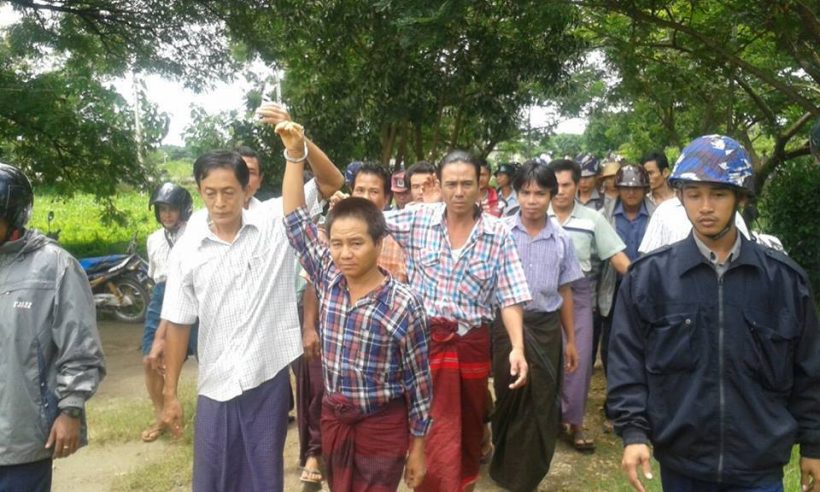 In August, AAPP recorded the sentencing of twenty-eight individuals for politically related activities, as well as the release of one political prisoner and the torture of five people.
AAPP also co-hosted a two day workshop with Former Political Prisoners Society (FPPS) this month aimed at defining the term ‘political prisoner’. The forum brought together civil society groups, political party representatives and former political prisoners, domestic civil society actors, as well as international NGO experts.. The outcome of the workshop is a broad definition of political prisoners that has been agreed upon by all parties present.
Following the rise of media censorship and the arrest of numerous journalists in the first half of 2014, the month of August also witnessed an increase in dialogue between the government and different media groups within Burma. On August 1, President Sein Thein met with the Interim Press Council (IPC), at which time the president agreed to recognize the Press Council as a mediation body in future disputes involving media freedom. Newly appointed Information Minister U Ye Htut met with the IPC on August 16, and the Chairman of the Myanmar Journalist Association (MJA), U Ko Ko, on August 17, to discuss similar issues surrounding media freedom and the best ways to solve such problems in the future. In addition, the parliament is considering amendments to the Penal Code to remove Article 499 and 500, both of which are remnants from the colonial era that have been used recently to jail journalists. Despite these more amicable relations, President Sein Thein still warned that media should exercise its freedom responsibly and “harmoniously”.
Land confiscation also continued to be an issue in the month of August: Fourteen farmers were incarcerated for staging plough protests and nineteen more farmers were charged in relation to land rights claims. Meanwhile, police and villagers clashed violently in a land related dispute that resulted in three locals being shot. The continued incarceration and arrest of farmers and land activists alike is of continued concern to AAPP.
(14 August 2014 – RFA/Burmese)(17 August 2014 – RFA/Burmese) (18 August 2014 – RFA/Burmese) (4 August 2014 – Irrawaddy) (17 August 2014 – RFA/Burmese) (18 August 2014 – DVB) (21 August 2014 – Irrawaddy) (18 August 2014 – Irrawaddy) (15 August 2014 – Irrawaddy) (5 August 2014 – RFA/Burmese) (20 August 2014 – DVB)