Home > Reports and Statements > Statement on Disappearances in the Spring Revolution

Statement on Disappearances in the Spring Revolution 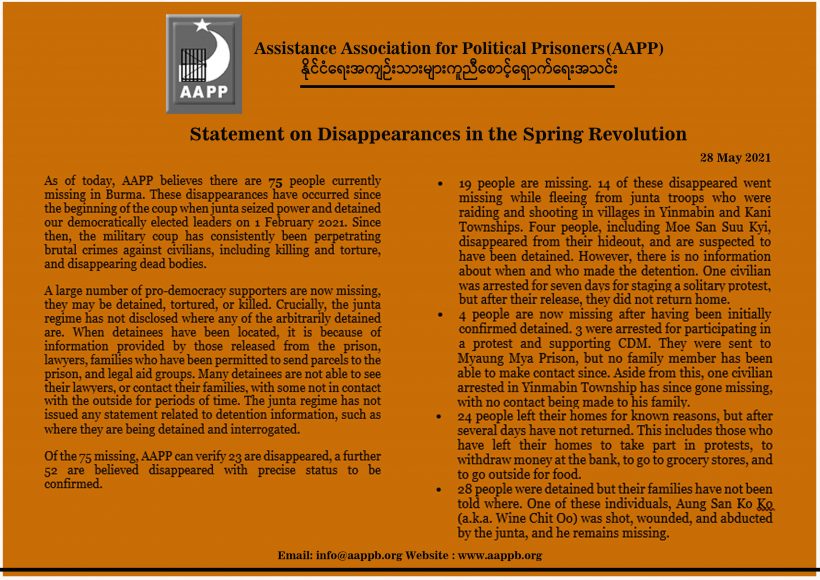 As of today, AAPP believes there are 75 people currently missing in Burma. These disappearances have occurred since the beginning of the coup, when junta seized power and detained our democratically elected leaders on 1 February, 2021. Since then, the military coup has consistently been perpetrating brutal crimes against civilians, including killing and torture, and disappearing dead bodies.

A large number of pro-democracy supporters are now missing, they may be detained, tortured, or killed. Crucially, the junta regime has not disclosed where any of the arbitrarily detained are. When detainees have been located, it is because of information provided by those released from the prison, lawyers, families who have been permitted to send parcels to the prison, and legal aid groups. Many detainees are not able to see their lawyers, or contact their families, with some not in contact with the outside for periods of time. The junta regime has not issued any statement related to detention information, such as where they are being detained and interrogated.

Of the 75 missing, AAPP can verify 23 are disappeared, a further 52 are believed disappeared with precise status to be confirmed.

interrogated, including some of those not allowed to meet with lawyers and AAPP believes are no longer in prison.

AAPP will continue to verify the recently disappeared.

According to international law, one is considered disappeared when unlawfully detained, abducted, against their will with failure by the responsible party to provide information on said person.

International humanitarian law is explicit on missing persons. States should not perpetrate, condone the act, or impede investigation. The junta in Burma has done nothing to account for these missing persons, in fact threatening civil society and oppressing civilians who raise the issue. The United Nations Security Council unanimously adopted Resolution 2474 on 11 June 2019, calling on all parties to actively report and search for missing persons. Time and again, resolutions have underscored knowing the fate of loved ones is a basic human right.

In the International Committee of Red Cross’ study on international humanitarian law, it is affirmed “practice indicates that the obligation to account for missing persons arises at the latest after an adverse party provides notification of those who are missing”. AAPP is providing

notification of 75 believed missing persons. The junta is the responsible party for the crimes and disorder resulting in these disappearances.

The AAPP calls for the international community, including the United Nations and the ASEAN country members, to work effectively to investigate disappearances during this attempted coup.