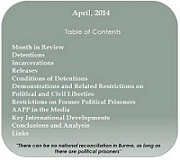 The passing of celebrated political journalist and former political prisoner U Win Tin this month marks a huge loss for the democracy movement in Burma. AAPP would like to express our condolences to the family and loved ones of U Win Tin for their loss, and also acknowledge the important place U Win Tin held in the fight for freedom in Burma. The loss of U Win Tin is felt by all those who have fought for, and continue to fight for, true democracy in Burma.

The month of April saw the indictment of 10 political activists, with two imprisoned. Four prisoners were sentenced this month, including one journalist. There were no new releases this month.

Celebrated political journalist and political prisoner of almost two decades, U Win Tin, passed away on 21st April 2014 at the age of 85. U Win Tin‟s enduring and uncompromised commitment to reporting Burma‟s political situation and the fight for democracy has deservingly famed him as one of Burma‟s foremost opposition figures. The month of April has seen clear demonstrations that press freedom and a willingness from authorities to defend freedom of speech is not yet a reality in Burma. “The dictators can only detain our bodies, not our souls.” – U Win Tin
(21 April 2014 – Irrawaddy)
Burma Campaign UK has released a statement calling on the Thein Sein Government to release two activists jailed last month following a peaceful protest. The two were charged under section 18 and Burma Campaign UK called upon the Burmese Government to honour their promise of releasing all political prisoners and to repeal legislation that is continuing to create political prisoners.
(23 April 2014 – Myanmar Times)/(28 April 2014 – Karen News)

As the trial of the four Unity journalists and Unity CEO has begun in the Pakkoku District Court, witnesses have testified that trespassing signs were not erected at the alleged chemical weapons factory until after the article was published. This raises questions as to the validity of the trespassing charges brought against the five. At the eighth court hearing the defendant‟s lawyer raised an objection to the court proceedings, arguing they were not being carried out under current law: “this procedure is not in conformity with statute law and so we are set to present an oral argument on this.”
(29 April – DVB)/(29 April 2014 – Eleven)/(23 April 2014 – Eleven)/(03 April 2014 – Myanmar Times)/(01 April 2014 – Eleven)
Burmese security officials have commented that while citizens may now enjoy freedom of expression, they must be mindful to not disturb public order. Both Col Tin Win of the Security and Border Affairs Ministry and Police Brig-Gen Thura Bo Nireleased statements early this month regarding the importance of discipline when protesting. Bo Ni commented “If the citizens can adopt a custom of discipline when staging protests to highlight their problems, it would be in the best interests of our country‟s development.” (03 April 2014 – DVB)