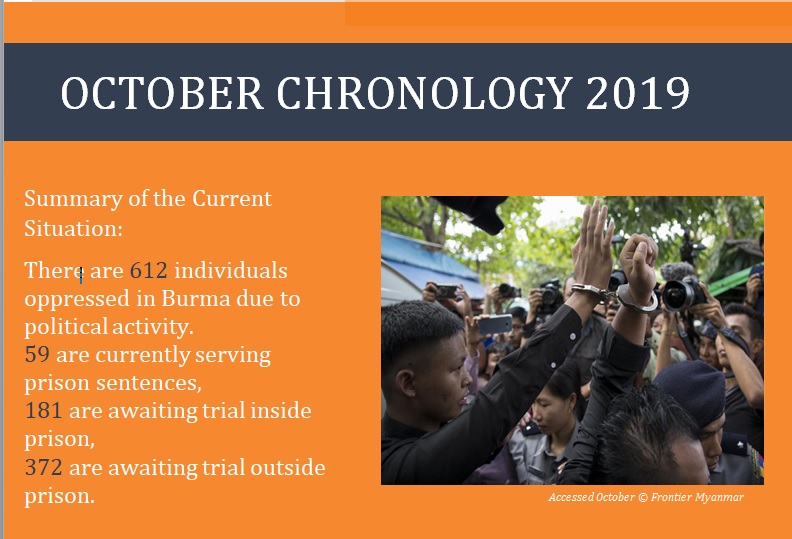 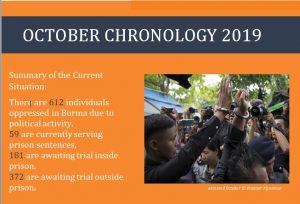 Month in Review for October

Freedom of Speech and expression in Burma has continued to regress. In October, Nay Myo Zin, Naw Ohn Hla, two Karen Youths Saw Albert Cho and Sa Thein Zaw Min and five members of the Peacock Generation Thangyat Troupe were sentenced, three civilians including the elder sister of former child soldier Aung Ko Htwe were prosecuted, three supporters of Naw Ohn Hla – Sein Htwe and Zarchi Linn of Democracy, Peace and Women (DPW) group, and Naw Larshee Htoo of the Karen Women’s Union (KWU), and three civilians were charged for exercising their rights to freedom of speech and expression. These incidents show not only the limitations of freedom of expression in Burma but also creates the fear amongst citizens. Moreover it threatens to disrupt the already faltering reconciliation process. It should be lost on no one that the techniques and laws used by the authorities to control freedom of speech and expression are the same which were used by the military dictatorship when it persecuted dissidents.

The Assistance Association for Political Prisoners (AAPP) continues to urge the government to address the issues of freedom of expression and to amend or repeal Section 500, 505(a)(b) of the Penal Code, Peaceful Assembly and Peaceful Procession Law and Telecommunication Law which are all undemocratic legislation which is used to oppress Burmese civilians.

Alongside an increase in intensity of armed conflicts in ethnic civilians, there is a simultaneous rise in human rights violations suffered by the local populations.

As a result of continued conflict in October, a total of 26 civilians from Arakan State had been arrested.  Two of this 26 are Moe Hnin Phyu and Kyaw Naing, sister and brother in law of AA Chief Commander Tun Myat Naing, whom are now facing charges under Section 52(a)(b)(c) of the Counterterrorism Law.

The above are serious human rights violations. Yet both ethnic armed organizations and the military deny that they committed these abuses. Human rights violations in these conflict areas have not decreased. Section 7 and 8 of the Rome Statute refers to crimes against humanity and war crimes. Thus,  an armed group, which has been officially formed, must follow and address the Geneva Convention and the International Humanitarian Law (IHL) and Body of Principles for the Protection of All Persons under Any Form of Detention or Imprisonment and has to protect its civilians.  Further, the government has not signed and ratified yet the Convention against Torture and Other Cruel, Inhuman or Degrading Treatment or Punishment (UNCAT). Besides, the government must discuss with the ethnic armed organization which have not signed yet the Nationwide Ceasefire Agreement (NCA) . For the well-being off all civilians living in these conflict affected ethnic areas the immediate implementation of the peace process is necessary. Accordingly, we, AAPP, urge the government to work towards the peace process and to ratify the above international treaties and provide protection and safety to all of its civilians.

The human rights violations committed by some ethnic armed organizations pose a serious threat to indigenous people. Highlighted incidents from October are shown below;

We strongly urge ethnic armed organizations involved in such HRV’s to protect the indigenous and local population and to immediately end these abuses.

The deteriorating prison situation in Burma is an indication that prison reform is urgently needed. The lack of adequate medical healthcare and ongoing issue of overcrowding in prisons are highly detrimental to prisoners well-being . These cases are shown that prisoners’ rights are being lost.

The aforementioned incidents indicate the need for urgency when dealing with prison reform process. The Assistance Association for Political Prisoners (AAPP) urges the government to comply with International standards for the implementation of prison reform such as the: Standard Minimum Rules for the Treatment of Prisoners (SMRs) and Basic Principles for the Treatment of Prisoners. Moreover, we also urge the government to cooperate with the organizations working on prison reform.

Farmers protesting land confiscation and land disputes are still facing arrests and lawsuits. After three farmers from Dawso Shay Village in Demoso Township, Kayah State, had been charged under Section 6 (1) of the Public Property Protection Act by #360 artillery, they were arrested in October. In addition, ten farmers from Shwe Taung Township, Bago Division, had charges filed against them under Section 10 of the Law Protecting the Privacy and Security of Citizens by #509 artillery. Although the government is in the process of returning some confiscated land and paying for compensation, the farmers have not received the farmland area at the time of confiscation and they are not being fully compensated and issues such as the loss of farmland to the original owners are still ongoing. Therefore, the government needs to take an action strictly to solve the land confiscation and land disputes. Furthermore, the Assistance Association for Political Prisoners (AAPP) urges the government to comply with the law on the Protection of Farmers’ Rights and the Promotion of the Rights of the Farmer and Land Acquisition, Resettlement and Rehabilitation Law, and to promote and protect the human rights and livelihood of farmers.