International Day in Support of Victims of Torture, 26 June 2019 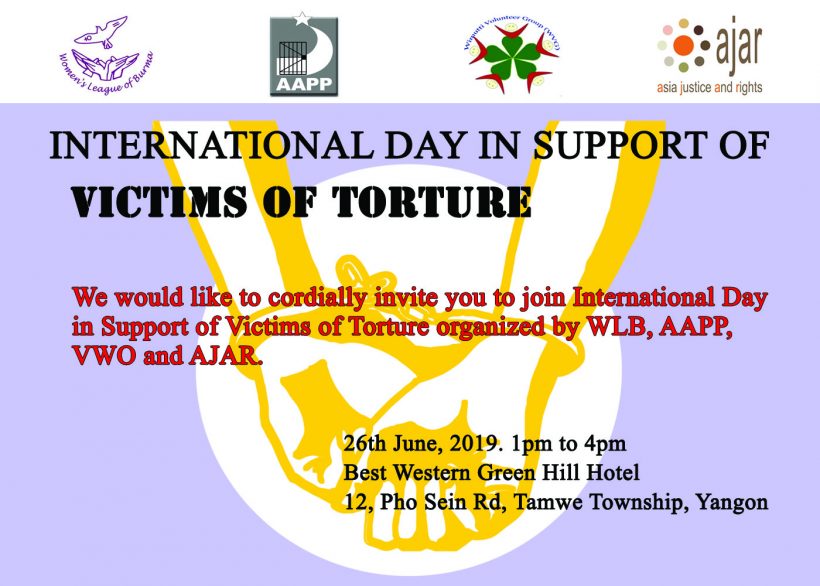 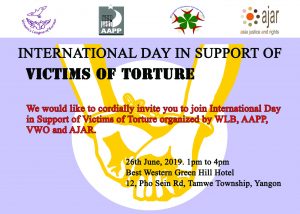 Women’s League of Burma (WLB), the Assistance Association of Political Prisoners (AAPP), the Vimutti Women’s Organization (VWO) and Asia Justice and Rights (AJAR) are calling for an end to torture, and for holistic justice for torture survivors.

Torture is not a practice of the past; it continues to be used in Myanmar by State actors, in particular in ethnic areas affected by current conflicts. Torture is still used during detention and interrogation, often in an effort to procure information or to force confessions. Villagers suspected of being affiliated with ethnic armed groups are frequently captured by military and tortured indiscriminately. Until now, women and children faced tortured in the form of sexual violence. It is the government’s responsibility to stop and prevent torture in its jurisdiction.

The Myanmar authorities are currently using defamation charges to threaten and punish activists who speak out for torture survivors and victims of other human rights violations. Repressive laws and the flawed judicial system are used against activists and torture survivors, rather than providing them with any form of justice. Impunity still prevails and perpetrators remain unpunished.

The recent international developments aimed at addressing human rights violations in Myanmar, such as the International Fact-Finding Mission (FFM), the Independent Investigative Mechanism for Myanmar (IIMM), and the proceeding at the International Criminal Court (ICC), are welcome steps towards ending impunity and bringing justice for torture survivors.

However, justice is not solely about prosecution and punishment of perpetrators. Torture survivors need Transitional Justice (TJ), which is a holistic framework that includes revealing the truth about violations that have taken place, providing reparations and rehabilitation to victims, and undertaking the reforms necessary to guarantee that the violations are not repeated. This TJ framework mirrors the rights of victims of torture under international human rights law (rights to truth, justice, reparations, and non-repetition).

The Myanmar government and the international community have a duty to protect rights of torture survivors and to provide appropriate remedies for the crimes committed against them. In addition to reparations, they must provide torture survivors with urgent interim relief, acknowledge the wrongs done to them, and prevent torture from recurring.

We call on the government of Myanmar to:

The Women’s League of Burma (WLB) is an umbrella organization comprised of 13 women’s organizations of different ethnic backgrounds from Burma. WLB was founded on 9th December 1999. Its mission is to work for women’s empowerment and advancement of the status of women, and to work for the increased participation of women in all spheres of society in the democracy movement, and in peace and national reconciliation process through capacity building, advocacy, research and documentation.

AJAR is a regional human rights organization based in Jakarta. AJAR works to increase the capacity of local and national organization in the fight against entrenched impunity and to contribute to building cultures based on accountability, justice and a willingness to learn from the root causes of mass human rights violations in Asia Pacific region.