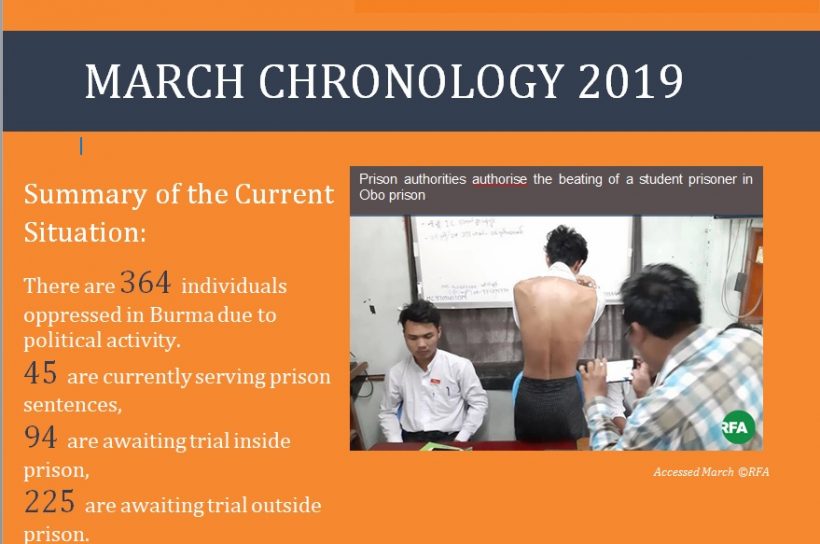 Armed ethnic conflict has been occurring in Burma for over 70 years. 7 decades on indigenous people living in ethnic regions continue to face serious human rights violations due to the non-ending conflict. Often indigenous people are targeted by both armed groups and the military. On March 21, the National Reconciliation and Peace Centre (NRPC) and representatives of eight Nationwide Ceasefire Agreement Non Signatory Ethnic Armed Organisations (NCA-NS EAOs) held a meeting and released a joint declaration after the meeting. This declaration included some agreements such as continuing the coordination and efforts toward reducing the ongoing armed conflicts and efforts to solve political problems, continuing forming the basis for national reconciliation and peace through peaceful political means. The Assistance Association for Political Prisoners (AAPP) welcomes the meeting and efforts made towards sustainable national reconciliation and peace. However, as conflicts continued after the meeting, we cannot say it has been effective yet. Along with severe clashes occurring between the military and Arakan Army (AA), the arrests, tortures, charges, killings, disappearances and injuries to civilians have been increasing.

Besides the arrests, locals have died and been injured due to the clashes between the military and Arakan Army (AA) in Mrauk-U, Buthidaung, Minbya and Kyauktaw Townships in Arakan State and in Shan State between the ethnic armed groups in Nam Land Sub Township, Hsipaw, Kyethi, Kyaukme and Namtu Townships. Moreover, Ba Saw, Former Thayettapin Village Administrator from Kyauktaw in Arakan State, Kyaw Kyaw Hla, the police chief of Tain Nyo police station in Mrauk-U Rakhine State, a Ferryman, identified as Maung Chay from Arakan State’s Rathedaung Township, and Aung Kyaw Nyunt from Paletwa Township in Chin State, were assassinated.

During the widespread armed conflict in Burma, civilians are routinely targeted arrested, killed and tortured. Yet despite this, the government fails to take accountability and responsibility for these serious human violations. Burma has ignored repeated calls from civil society to sign and ratifiy the Convention against Torture and Other Cruel, Inhuman or Degrading Treatment or Punishment (UNCAT) and International Covenant on Civil and Political Rights (ICCPR). Despite holding three sessions of The Union Peace Conference —21st Century Panglong and a meeting with eight Nationwide Ceasefire Agreement Non Signatory Ethnic Armed Organizations (NCA-NS EAOs), it is essential that the Burmese government signs and ratifies these international treaties such as ICCPR and UNCAT to build a concrete national reconciliation and peace. Furthermore, we urge the government to respect the Section 353 of the 2008 Constitution of Burma proclaims that “Nothing shall, except in accord with existing laws, be detrimental to the life and personal freedom of any person”.

The condition of freedom of speech continues to deteriorate.  The value of democracy declines due to the arrests, charges and sentences of civilians for staging a protest without permission, sharing their opinions and delivering a speech against authorities. In March Dr. Aye Maung and author Wai Hin Aung, were both sentenced to 22 years imprisonment for speeches given at the event commemorating the 233rd anniversary of the fall of the Arakan Kingdom in Arakan State. Moreover, six protest leaders, Nay Myo Win,  Tin Zaw Win, Aung San Lin, Hein Thura Zaw, Marlar Soe and Yamin Soe, were sentenced to one month imprisonment each for holding a protest to demand the reinstatement of workers who were fired by the Tharabar Hotel and for calling for improvements in labour rights. Additionally, the military filed a lawsuit against movie Director Min Htin Ko Ko Gyi for criticising the army’s role in politics in a series of Facebook posts and against Writer Nwe Thar Ki for making a live broadcast, which the military accused him of trying to intentionally create a misunderstanding between the people and the Tatmadaw.

Despite the civilian-led government being in power for three years, its civilians continued to be threatened and oppressed in contravention of international and domestic law. These arrests and threats are even in contravention of the NLD’s own Election Manifesto, which that the NLD will “Defend effectively those rights guaranteed by the constitution, and strengthen those rights in accordance with the present era.” Accordingly, the Assistance Association for Political Prisoners (AAPP) urges the government to respect and address the basic human rights such as freedom of speech.

The Message of Greetings sent by President U Win Myint on the occasion of the Peasants Day states that the Union Government has been working with diligence and focused attention for the release of illegally confiscated farmlands, to give out compensation and grievances suffered, to return released farmlands to original owners as quickly as possible, to make sure that confiscated farmlands which have not yet been released are investigated and reviewed as speedily as possible by the various committees and returned to the original owners. Indeed in March there was some positive developments and some confiscated land was returned and land permits and land compensation were given to farmers in Magwe Division and Irrawaddy Division and Mandalay Division.

Burma’s economy is highly reliant of agriculture and land cultivation. Besides that, rural farmers account for 70 per cent of the population in the agro-based country. Hence, it is crucial to protect the interest of farmers to develop the land sector which is a major economic sector of the country. The Law of Protection of the Farmer Rights and Enhancement of their Benefits is designed to protect farmer rights. Nevertheless, farmers in Burma face losing their land due to land confiscation and disputes. When land is taken, appropriate compensation is not often paid. Moreover, land rights activists who do speak out, often face arrest as was seen this month.

Land rights activists Myo Win and Aye Thein, farmers Ko Moe and Than Tun were sentenced to one month imprisonment each for staging a ploughing protest to return the confiscated in Pyin Oo Lwin in Mandalay Division, confiscated land for no 5 central training camp of the South Western Regional Military Command in Kha Yin Chaung Village in Shwe Thaung Yan Town, Irrawaddy Division. Then  on March 3rd  700 locals  from Yinmarbin Township in Sagaing Division staged a protest calling for the return of farmland included in the 10,000-acre Wahseintaung protected forest in Yinmarbin Township, are affected the Land Sector. This shows despite the few instances of land being returned or compensation being granted, land confiscation is still rife, and farmers and land rights activists continue to be arrested, harassed and detained when they speak out.

Despite numerous efforts made by both AAPP and MNHRC to undertake prison reform, the implementation of prison reform continues to be delayed. This means human rights violations continue to occur. On March 24, four Yadanabon Students, who are serving their prison sentences for burning ministers in effigy during a protest to demand better security on campus, were injured as they were slapped, kicked, beaten with sticks,  and had their heads smashed against a wall by over 20 prison staffs. Cho Win Tun, the superintendent of Obo Prison, denied that there was beatings against the students and instead stated that they just admonished the students. This shows that torture continues within Burmas prisons.

Another major issue regarding prisons in Burma is overcrowding. Khin Aye Swe, auditor general of Mandalay Region, said Mandalay Central Prison has three times the number of prisoners that it should have. The prison only has one staff member for every 26 inmates, whereas the optimal number is set at 1 for 12. She also highlighted the lack of medical staff. This is the situation of most prisons within Burma, not just Mandalay Central Prison.

To undertake prison reform effectively, a Human Rights and Potential Prison Reform Workshop, was organized by MNHRC and AAPP and was held in Nay Pyi Taw in March. They discussed the number of prisoners that each prison should have, presidential pardons, the potential reduction of sentence for those  who are being imprisoned unfairly. The workshop also discussed how 80 percent of prisoners are imprisoned in relation to drug charges, and how Burma’s prison laws are not inline with international standards. MNHRC will submit reports to the president. While initial efforts have been made for prison reform, AAPP urges the government to continue its work and carry out to reform the prisons immediately without any delays.