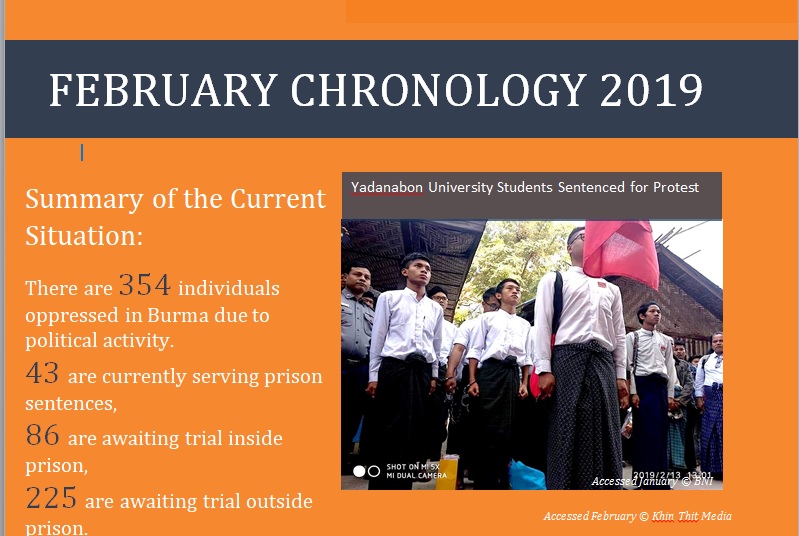 Freedom of Speech is a  basic human right, yet in Burma it is not protected and civilians who speak out often face oppression. The Universal Declaration of Human Rights(UDHR) and the International Covenant on Civil and Political Rights(ICCPR) proclaim that everyone has the right to freedom of expression. These right is also protected under Article 354(a) of  2008 Constitution of Burma. Yet these rights are repeatedly infringed upon. The following incidents of arrests, charges and sentences of activists, students, workers and civilians in February illustrate the continued deterioration of freedom of expression in Burma.

These arrests, charges and sentences, particularly those against ethnic civilians, hinder national reconciliation. Therefore, we urge the government to respect the freedom of speech of its citizens, primarily by dropping all cases against activists and amending repressive laws such as PAPPL and 505(b) of the Penal Code.

The deterioration of freedom of expression for civilians has dire implications for the freedom of the press.  In February, the chief editor of Tanintharyi Journal Myo Aung was fined 500,000 kyat ($326) under Section 25 (b) of the News Media Law, by a court in Dawei township, Tanintharyi Region for writing a satirical article. This is just one example of the oppression of media, done in order to stop them from criticizing authorities. Moreover, this encourages the self-censorship of journalists. In the 2015 Election Manifesto of the National League for Democracy(NLD), it states “The news media is the eyes and ears of the people. We will ensure that the media has the right to stand independently in accordance with self-regulation of matters relating to ethics and dignity, and the right to gather and disseminate news.” Accordingly, we urge the government to allow the existence of a free and independent media by acting in accordance with its election promises.

There has been some positive news in regards to prison reform. There will be a treatment center created for inmates suffering from HIV and TB in four central prisons in Burma in 2019. While these reforms are a positive step, there are still big concerns over the welfare and health of prisoners. In February four political prisoners, including former child soldier Aung Ko Htwe, Reuters Reporter Kyaw Soe Oo, Kachin Activist Nang Pu and Lawyer Zaw Win, suffered from healthcare concerns whilst in prison. Therefore, we urge the government to implement the right to medical healthcare for all prisoners, including these four political prisoners, in accordance with domestic and international laws and agreements

In further prison developments, according to Ministry of Home Affairs, Deputy Minister, Major-General Aung Thu, new two-story dormitories, prisons and prison cells are being built to accommodate the increasing number of inmates in prisons that are exceeding their capacity. We welcome such reforms and continue to urge the government to undergo systematic prison reform.  One major step to do this would to be to reestablish the Ministry of Justice which had been formed in 1948, only to be closed down the same year.

In February, clashes between Military and Ethnic Armed Group have continued. This means indigenous people living in conflict areas face severe human right violations. Some examples of the resulting human rights violations are listed below.

Human rights violations arising from conflicts such as arrests, disappearances, murders, tortures, charges and sentences habitually occur in ethnic regions of Burma. Yet, perpetrators continue to be unpunished and go without justice. The rights of citizens are protected by the Convention against Torture and Other Cruel, Inhuman or Degrading Treatment or Punishment(UNCAT) and the International Covenant on Civil and Political Rights(ICCPR). However, Burma’s government failure to ratify such  conventions has left citizens unprotected. Therefore, we urge the government to ratify international agreements and take actions against perpetrators by showing respect for, and the protection of, its citizens.

Despite the fact that Burma has ratified the International Covenant on Economic, Social and Cultural Rights (ICESCR) since October 2017, farmers and locals continue to have been dispossessed from their land. Farmers and land rights activists continue to speak out against land seizures. In February, farmers staged a protest in East Dagon Township and Mingaladon Township in Rangoon Division, Wundwin Township in Mandalay Division, Mabein Township in Northern Shan State, Thandwe Township in Arakan State and Kyaikmayaw Township in Mon State calling for the return of their land and for appropriate compensation.

Three farmers from Wat Hmae village in Salingyi Township in Sagaing Division were sentenced to pay a fine under Section 341 of the Penal Code for attempting to stop police from entering their village. Hence, we urge the government to address land issues including land confiscation and land disputes without any impede.

In regards to legislation and policy development in February, The Union parliament approved the formation of a joint committee to draft amendments to the 2008 constitution.  The office of the Union of Parliament released a bill to amend the Law Protecting the Privacy and Security Citizens. The Assistance Association for Political Prisoners (AAPP) welcomes the amendments of these laws, and urges the government to ensure these laws protect the right to freedom and safety.