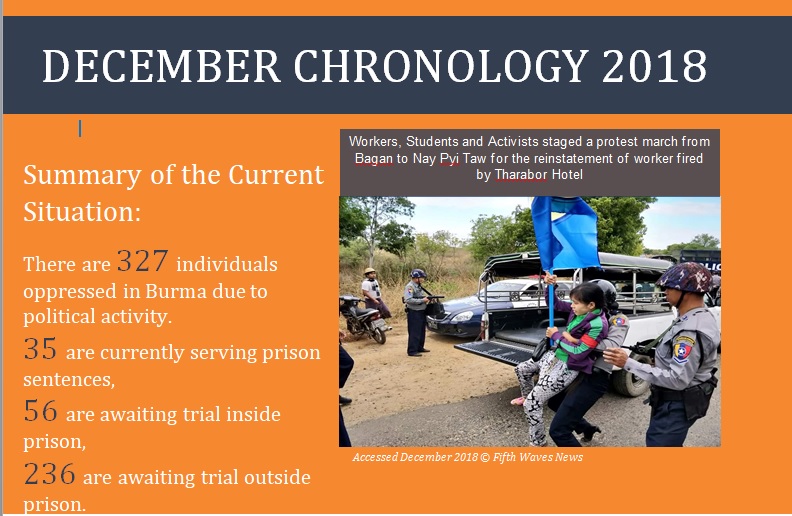 December 10 marked the 70th anniversary of the promulgation of the Universal Declaration of Human Rights (UDHR). On this day, President Win Myint said that we can see an improvement in human rights conditions in Burma. Yet, on the contrary we can see  human rights violations continuing unabated in Burma. The right to freedom of expression continues to be restricted and oppressed, land confiscations and disputes are ongoing and labour rights continue to be eroded. Worse still, ethnic people who live in conflict areas remain far too vulnerable to human rights violations.

This cases are vital to highlight as exercising the right to freedom of expression is crucial for the development of a country in a democratic transition. Article 354 (a) and (b) of Chapter (8) of the 2008 of Burma Constitution grants the right to freedom of expression as well as in the article 19 of the Universal Declaration of Human Rights (UDHR) and the International Covenant on Civil and Political Rights (ICCPR). However, article 500 of the Penal Code and the PAPPL have been used as tools to restrict the right to freedom of expression.  In December, a total number of 29 activists, workers and students have been charged under Section 19 and Section 20 of the PAPPL and three Kachin activists have been sentenced under Section 500 of the Penal Code. Therefore this demonstrates that repressive actions of the Burmese government not only violates local laws but also international laws and that there is no doubt that these laws must be amended or repealed immediately.

Last month held some important institutional changes. In December government spokesman and Director General of the President’s Office Zaw Htay said that the General Administration Department will be transferred to the control of the Union Government, which is a positive development. In addition, youth rehabilitation camps, which were previously under control of the military controlled Ministry of Home Affairs, have already been transferred to be under the control of the Ministry of Social Welfare, Relief and Resettlement, Rehabilitation Department, according to Minister Win Myat Aye. These small steps towards prison reform, are important, however much larger reform remains necessary. Human rights violation continue to occur in each prison of Burma, with overcrowding being a key issue which still needs to be addressed. Some small steps have been made, in December over 60 inmates were sent from other prisons, which are overcrowded, to be put in a new prison in Kyaikmaraw Township, Mon State, according to the Mon State Prison Department. Prisoners have been planning to transfer to the Kyaikmaraw Prison as Mawlamyine Prison, which is over 100 years old, is well above capacity, the prison is holding approximately 2000 inmates, nearly two times its capacity of 1000. Yet  the building of new prisons are not systematic ways to resolve prison overcrowding. The criminal justice system has to be changed in order to reduce prison overcrowding. AAPP recently released a report on Prison Overcrowding and the Need for Urgent Reform that highlights methods and recommendations to decrease population size in prisons. Therefore, AAPP suggests to build a more transparent prison system by transferring the Prison Department from the control of the Ministry of Home Affairs to that of the Civilian Government. Additionally, AAPP urges the Government to sign international treaties such as the International Covenant on Civil and Political Rights (ICCPR), the United Nations Convention against Torture (UNCAT), and its follow-up agreement in order to enable the protection of human rights abuses from the consequences of prison overcrowding.

The Office of the Commander-in-Chief of Defence Services announced that all military activities will be halted from December 21, 2018 to April 30, 2019 to facilitate the talks in Northern Command, North Eastern Command, Eastern Command, Eastern Central Command and Triangle Region Command in order to oversee separate negotiations with all NCA non-signatories. The suspension of military activities in order to oversee separate negotiations presents a good opportunity for implementing National Reconciliation and peace process. Moreover, the goal of a comprehensive peace agreement will entail the termination of conflicts, arbitrary arrests and tortures in ethnic areas as the Chief of Commander stated that he was determined to complete the peace process by 2020. It is not only important to sign the agreement of the ICCPR and UNCAT, but it is also necessary to call for the immediate release unconditionally of all people whom have been charged, arrested and sentenced under Section of the Unlawful Association Act.

The fact that those responsible for the rule of law also continue to abuse the law is a worrying situation in Burma. On December 17, a couple from Kyauk Than Village, Shwegyin Township, Bago Division protested in front of the Shwegyin Police Station. They were protesting that no action had been taken against Tan Seik Police Outpost Sub-Inspector Tun Ko Ko Lwin after he beat them up, despite a police report being sent. Such failures to provide justice, and the delays of action taken against human rights abuses in accordance with the law is a loss for the civil rights for victims.  Therefore, AAPP calls for the Government to promote human rights by taking action, investigating, and providing human rights training to organizations working in accordance with the law in order to implement justice for victims and prevent future human rights violations.

Arbitrary arrests are another violation of an individual’s human rights as stated in Article 9 of the UDHR. On December 15, member of Arakan National Party (ANP), Ye Kyaw (a.k.a) Ni Aung was arrested by the Thaketa Township police at the Arakan Day ceremony in National Races Village, Thaketa Township, Rangoon Division in connection to the death of Military intelligence Corporal Win Htike. AAPP urges the Government to immediately conduct a free and independent investigation for victims who were arbitrarily arrested in order to stop unnecessary tortures and sufferings.

Land disputes continued throughout December. To date, land disputes, delays in resolving farmland confiscations, inability to provide appropriate compensations, and the charging and sentencing of farmers are all issues that need remain needing to be addressed. In December, approximately 700 acres of land was confiscated by the Military in Bahmo Tract, Mohnyin Tract, Myitkyina Tract in Kachin State. Whereas 1421 acres of confiscated land in Pyapon Township, Irrawaddy Division, was returned to original farmers. In Katha Township, Sagaing Division 303.20 acres of farmland, which was involved in the project of Katha to Bahmo Railway, was returned to the original farmers by the regional government. However, the following incidents from December have been highlighted to show how in many more cases land issues still remain unresolved.

In a trip to Mon State, President Win Myint said that State and Regional divisional governments often do not deal with the return of confiscated land. However, the Government has the main responsibility in handling land issues. Therefore, AAPP calls for the Government to follow the rules of International Covenant on Economic, Social and Cultural Rights (ICESCR), which the Government has signed, in order to allow its citizens to stand with human dignity.