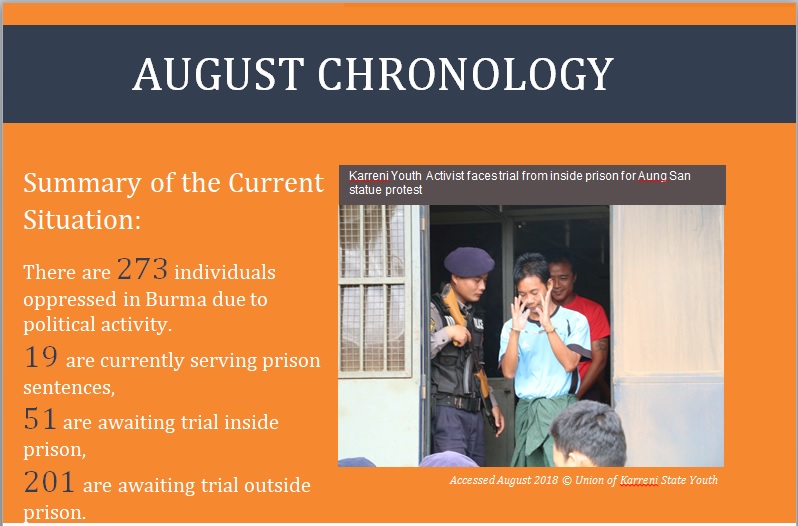 Disgruntlement with reparations and other thoughts mark 1988 anniversary

In the celebrations across the country that marked 30 years since the 1988 uprising, undertones of frustration at the lack of democratic progress were laid bare.  In Rangoon, a large ceremony was hosted in the Yangon University’s recreation hall ram packed to its 2000 person capacity. Former political prisoner and current NLD lawmaker Min Thu, acknowledged the slow pace of democratization but spoke favorably of the current freedoms people enjoy to reveal their opinions and criticize openly. Mya Aye was more cautious, believing Burma “has yet to reach the goal of democratization”. Former political prisoner and student leader Min Ko Naing urged students and activists to remain committed to the struggle for real democracy. Although improvements in society were highlighted, Min Ko Naing urged caution, especially “when talking about judiciary sector”.  His pleas are well grounded. The trial and sentencing of Wa Lone and Kyaw Soe Oo has exposed the repressive way archaic laws are used to stifle free speech. Yet the Burmese people have long experienced such restrictions, one method of which this is done is through the reliance on colonial legislation such as the Unlawful Associations Act (1908), and the Penal Code (1861), legislation that the 88 uprising was aiming at to overthrow. Yet 30 years on their use continues.  A colonial past is not a justification for their use in the modern judiciary, and there is a need to reform legislation in line with international standards.

The discussion is not made any easier by legislation introduced under the watch of a quasi-civilian government. AAPP continues to calls on the Government to amend or repeal all laws which are used to oppress Burma’s civilians, only though amendment can Burma meet its democratic aspirations.

The harassment of journalists is a time-tested tactic

On August 27th, after more than eight months in detention in the infamous Insein prison and other detention centers, the judge presiding over this landmark case of Wa Lone and Kyaw Soe Oo announced he was ill at the very last moment.[1] Sentencing was delayed for another week and they spent another week in prison.  Yet, harassment of political prisoners is nothing new, and has been long documented by AAPP. Khin Kyaw Kyaw was a lawyer defending a protester charged with demonstrating against the National Education Law in March 2015, before she herself was charged under Section 228 of the Penal Code. By February 2018, the case against Khin Kyaw Kyaw remained open, with her having had to appear in court 52 times the lawyer spoke to the press saying “It has been a long time and it is really exhausting for me. The trial is wasting my time and money”. Equally, attempts can be made to delay court cases in which the Government would benefit from reduced international attention. A second aspect of intimidation that has been felt by political prisoners, including Wa Lone and Kyaw Soe Oo, is the restriction on the right to family life that pre-trial detention has. Wa Lone felt this bitterly when his wife gave birth whilst he remained in pre-trial detention. We have seen such tactics, listed below for clarity, being used against Wa Lone and Kyaw Soe Oo since they were first arrested back in December 2017.

Continued use of  pre-trial detention is reprehensible and used to harrass political prisoners.

The Reuters’ case is a dark symbol of the current state of press freedom, and shows that the government has been suppressing press freedom. AAPP calls on the Government to release the two Reuters journalists as well as other journalists who are facing trial unconditionally and immediately.

The prospect of prison reform with the Government’s new SOPs

The Health and Sports Ministry announced new standard operating procedures (SOPs) for prison health care at a conference in Nay Pyi Taw on August 22. The report (yet to be released) will be outlined in 22 chapters and as reported by The Irrawaddy, will cover “the ethics of healthcare professionals and prison workers; managing emergency and outbreak conditions; managing chronic illness, communicable diseases and mental health problems; caring for women and children; and improved handling of the health care system in prisons”. These issues have long deserved attention and the initial findings of the report are welcomed. However, worryingly civil society and local NGOs were ignored in the consultations for this report. The Ministry instead relied on the United Nations and INGOs such as the World Health Organization and Three Millennium Development Goal Fund. Although these organizations have vast resources at their disposal they the lack first hand knowledge of Burma’s prisons conditions and the judicial system that AAPP and other CSOs have. AAPP is largely staffed by former political prisoners who through their experiences are experts on how  the judicial system is broken. AAPP’s Mental Health Assistance Program has provided vital information on the experiences inside prison. Through counselling of former political prisoners and family members MHAP understands how dire conditions trigger trauma, depression, PTSD, and anxiety, its authority on this matter mean it must be consulted. Apprehension of the new SOPs is heightened by the lack of dissemination of its contents and subsequent lack of accountability for their contents. Whether the important fight for counselling provision (which MHAP has performed independently of Government since 2010) has been included is of great significance to those prisoners currently enduring dire conditions.

Further,  ensuring human rights of prisoners are protected is not limited to the prisons themselves, but also extends to the judicial system that arbitrarily arrests and charges them in the first place. Therefore no reform can be piecemeal, nor can it take place in a vacuum. SOPs need to be developed after consultation with civil society and former political prisoners to ensure it has the intended result.

In addition ethnic issues in Burma continue to be problematic. Ethnics who live in conflict areas (which have lasted for 70 plus years in some area) continue to be caught up in the onslaught. This August, the TNLA arrested Nang Moe Hom in Namhkam Town, Shan State, claiming that she broke the law. The KIA arresed four villagers from Tharlawkyi village in Myitgyina Township, Kachin State. 16 villagers from Paingnim and Eakgyi village in Kyaukme Township, Northern Shan State were arrested by Light Infantry Battalion 501. Sai Jikta and Sai Jinga, from Nawng Loum village in Mong Pan Township, Southern Shan State, were detained and held at gunpoint before having black bags placed on their heads and subjected to questioning overnight by Military soldiers from Infantry Battalion 296. They were accused of ties to the RCSS/SSA. These are the consequences of the civil war. Arbitrary arrests and torture are an ingrained habit in Burma and demonstrate no respect for human dignity. These ingrained habits enable continuing human rights violations that spiral out of control. In article 9 of the UDHR and ICCPR it says “no one shall be subjected to arbitrary arrest, detention or exile”, which Burma 2008 constitution commits to. Therefore, AAPP calls on the Government to respect this civil and international law upon its people.

On August 6 the TNLA released a statement accusing the Military of raping, torturing and murdering six female medics after being ambushed. This is a massive violation of human rights and demonstrates how slow the law is in dealing with these kinds of cases, violation of human rights will only continue if nothing changes. Article 8(1) of the Rome Statute of the International Criminal Code says, “The court shall have jurisdiction in respect of war crimes in particular when committed as part of a plan or policy or as part of a large-scale operation. On August 27, the Independent International Fact-Finding Mission released a report saying victims have not been given fair justice for the last ten decades as exemptions from punishments are deeply rooted in Burma’s politics and legal system. Two men who were beaten and were compelled to give 400,000 kyats ($260) by a Laung Chaung Station commander and two troops in Rathedaung Township, Arakan, demonstrate this. In addition, Mading Zaidan Bawm Ying was beaten up by BGF troops in Sadon, Kachin State, to be later released on bail. Moreover,  a member of a Namhkhine militia beat a travelling woman on Lashio to Muse road in Northern Shan State as her husband was chased away with a knife. These cases demonstrate that  offenders continue to escape punishment. The Government must take action with the judicial sector, and reform must be conducted as soon as possible by singing the UNCAT National and political rights continue to be abused with human rights violations and arrests occurring in ethnic areas. For example, the leader of the Movement for Democracy Current Force (MDCF), former political prisoner Htin Kyaw’s arrest this month. And Khun Kawrio and Ko Bwe Htoo, were charged under Section 505(b) of the Penal Code. In addition, former Pyay University Students Union Chairman Myat Min Htet was charged under Section 19 of the PAPPL. Article 354 (a) Burma 2008 constitution states that people have the right “to express and publish freely their convictions and opinions”, though Section 505 (b) of the Penal Code and Section 19 of PAPPL are oppress this. It is near impossible to achieve a full national reconciliation without amending these laws. Any peace process will be further delayed without national reconciliation. Therefore, AAPP urges the Government to protect the rights of citizens by amending these law.

The other case this month of restrictions on citizens and political rights are Than Shwe and Mg Myint Kyi, who were both sentenced to six months under Section 13(1) of the Immigration and National Registration Law by Sittwe Township Court in Arakan State. They were initially suspected of being involved with the bombings in Sittwe, and Aye WIn and Mg Oo Myint were prosecuted under the Counter-Terrorism Law. However, it is not acceptable that these charges are ongoing during a civilian presidency when there is no evidence. During a democratic transition these cases should be declining for Burma’s democratic progress to be a success. Consequently, AAPP calls on the government to investigate carefully. In August returned confiscated farmland. However, the following cases demonstrate that farmland activists continue to be arrested, charged, and sentenced over land disputes. On August 8, farms rights activists Aye Thein who initially had a warrant issued for his arrest from October 2016, was arrested arrested for performing a ploughing protest.

Land rights are still under threat as the current land law has not been to be enough to protect the interests of farmers. For instance, delayed action on confiscated farmland, miscarriage of justice, and no discussion with farmers when providing the compensation continue to this day. AAPP urges the Government to respect the agreement of ICESCR which Burma had signed.

In this August report, conflicts continue to  occurred between the Military and ethnic armed forces, farmers rights continue to be neglected, prisons conditions have not improved and the freedom of expression of nationals, and political and national rights are still restricted. Subsequently, AAPP calls on the Government to take over action on the repressive laws, in order to protect nationals’ political and national rights by reviewing and amending these repressive Law. We will only achieve national reconciliation by amending the repressive laws. AAPP calls on the Government to release all remaining political prisoners immediately.

[1] This month in review covers the month of August, thus the sentencing of Wa Lone and Kyaw Soe Oo (on September 3) will be covered in the next edition.