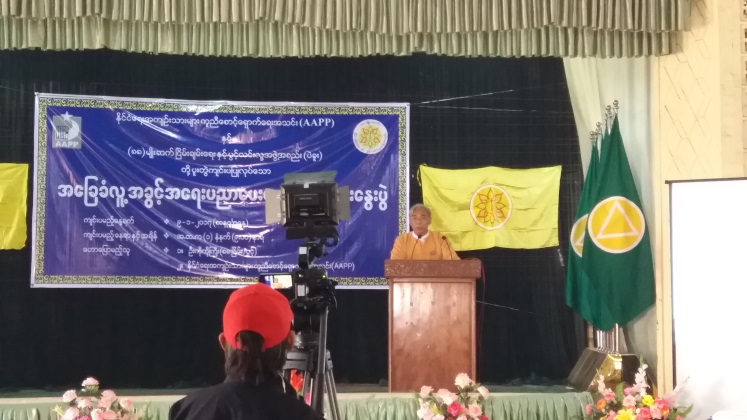 16 lectures on human rights in schools and community

Vice-Chairman of Bago Division Parliament U Kyi Zin giving the opening speech in the Government school in Bago Division.

In the month of January, the Assistance Association for Political Prisoners (AAPP) delivered 16 lectures on human rights in various government and private schools; around the Pyinnka Yeik border; and for the community in general. The major theme of these lectures was protection and prevention of human rights abuses against children and civilians, and how to follow the law. The lectures were organized in government high schools in Pegu, and Bogalay Townships in Rangoon Division, Bago Division and Irrawaddy Division respectively;Lin Kyaw Aung Private School in Magway Division;and for the community in PyinnyaYeik Border in Magway Divison, Sagaing Division, and Mon State. The respective Governments, regional parliament representatives, leaders from 88 Peace and Open Society, and other human rights groups participated andhelped AAPP in organizing these lectures. The lectures also focused on issues relevant to the students such as child rape, and other rights and duties as prescribed under the Universal Declaration of Human Rights (UDHR). These lectures were delivered by AAPP members, head of AAPP’s Rangoon office, U Aung Myo Kyaw, U Htin Aung, and AAPP Human Rights Trainers U WannaNwe, U Kyaw Swa Linn and U Kyaw Oo, Daw Hnin Pan Eain, and other guest speaker Member of 88 Peace and Open Society U Ko KoGyi. These lectures were attended by students, teachers, school officials, township educational officials, township NLD member, divisional parliament representatives, departmental officials and civilians. At the end of each presentation, AAPP distributed UDHR pamphlets to raise awareness amongst the participants. 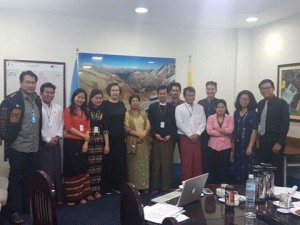 On January 17, Ms. Yanghee Lee met with AAPP amongst other human rights activists and civil society organizations at the United Nations Development Program (UNDP) Office in U Thant Hall, Rangoon. The agenda of the meeting was to assess the human rights situation in Burma and discuss how it is being addressed by the Government. Ko Zaw Moe (AAPP) was one of the presenters at the meeting. He discussed the AAPP documentation listsof Political Prisoners, advocating for the release of Political Prisoners, and the modifications in the definition of ‘Political Prisoners’. He also highlighted the issue of arbitrary restrictions on freedom of speech and expression in the form of Section 66(d) of the Telecommunications Law in addition to highlighting Section 17(1) of Unlawful Associations Act as a tool used against human rights defenders. Other issues which were also brought to light by AAPP during the meeting included, overcrowding in prisons, increasing number of prisoners convicted for drug crimes, excess pre-trial detention, and the urgent need to reform prison conditions.

12-DAY TRAINING IN MAGWAY DIVISION AND KACHIN STATE, AND A LECTURE IN RANGOON As a part of the series of regular training’s on transitional justice, AAPP held two 12-day training and a lecture on transitional justice in the month of January. The training from January 6 to January 17 was organized in Yenangyaung Township in Magway Division by AAPP and Myitta San Yay Peace and Social Development Group. 28 people participantsof the training included members from the NLD, Myitta San Yay Peace and Social Development Group, and Peace Myanmar. The training was administered by AAPP’s Human Rights and Transitional Justice Trainers Sai Myint Thu, and Action Committee for Democracy Development (ACDD)’s Trainer Zun Pang. AAPP provided training in Myintkyina Township, Kachin state from January 16-27. During the training ethnic youth from various organizations in multiple Townships in Kachin State attended. The trainers are U Saw Than Hlaing, and U Kyaw Oo. Magway Division has been grappling with various human rights issues such as unfair elections at the village level, widespread corruption, inadequate healthcare and medical treatment, arbitrary confiscation of land, and a lack of the rule of law, drug issues, thieves, and child labor. On January 19, AAPP also delivered a one and a half hour lecture at the Civil Society Peace Forum held in Panda Hotel in Rangoon. 150 representatives of civil society organizations fromvarious divisions and states attended theForum. AAPP’s Wunna Nwe attended the Forum and delivered the lectureon transitional justice. Reports, which were released by AAPP, were provided to the participants. Such activities serve as a capacity-building measure for these actors carried out with the aim ofencouraging and informing their participation in the democratic setup.