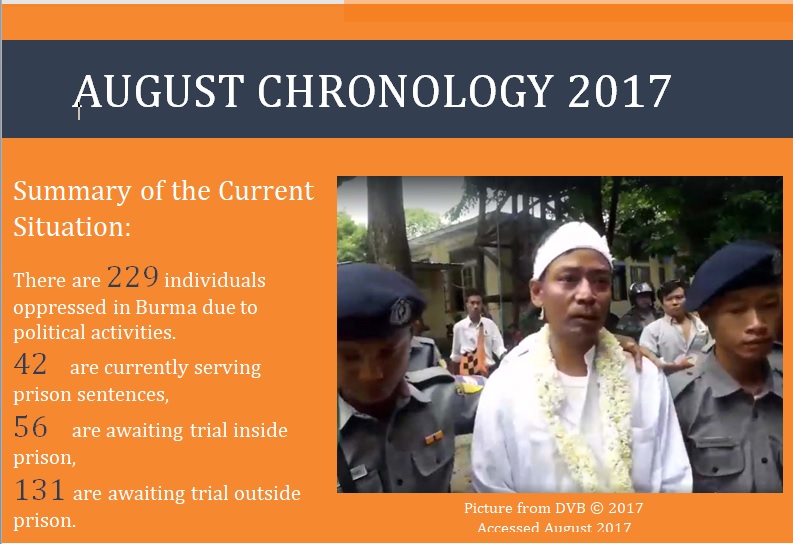 On August 8, ceremonies were held in front of Rangoon’s City Hall and Mahabandoola Park in honor of those who lost their lives participating in the pro-democracy demonstration, known as the 8888 Uprising. The series of marches, protests, and civil unrest in 1988 that culminated in the event on August 8 is a day forever ingrained in the memory of those who fought and continue to fight for a free and democratic society in Burma. On the 29th anniversary of the 8888 Uprising, AAPP Joint Secretary Ko Bo Kyi released a personal statement, in which he thanked those who sacrificed their lives during one of the most pivotal events in modern Burmese history, pledging to continue his efforts in working towards human rights and democracy in Burma in their honor. Like Ko Bo Kyi, many of the student leaders of the 8888 Uprising went on to become life-long activists and human rights leaders, often spending years behind bars as political prisoners. Commemorating the important event, which drew the support of hundreds of thousands of people from across the country in a strong show of the public’s wish for democracy, is a reminder that despite the election of a civilian led Government in 2015, democracy and human rights has not been established in Burma.

In August, the trial of the three journalists and three civilians, charged in July under Section 17/1 of the Unlawful Associations Act, continued at the Hsipaw Township Court in Shan State. Journalists Aye Naing and Pyae Phone Aung, from the Democratic Voice of Burma (DVB), Thein Zaw A.K.A. Lawi Weng, from The Irrawaddy and civilians Mai Tun Aye, Mai San Nyunt, and Mai Aung Kham, were arrested on June 26 near Myothit Village in Namhsan Township, Shan State by the Military, during their return from covering a drug destroying ceremony conducted by the Ta’ang National Liberation Army (TNLA), an Ethnic Armed Group (EAG) that is currently engaged in conflict with the Military and is classified as an “illegal organization” by the Government. Sections 17/1 and 17/2 of the 1908 Unlawful Associations Act have historically been used as a tool against political activists, journalists, and most commonly against members of ethnic minorities in Burma, prohibiting individuals from forming organizations or associating with organizations, such as EAGs, that the Government deem “illegal”. Commonly used to persecute individuals involved in, or reporting on Burma’s long standing civil war, involving the Military and numerous EAGs, the law directly violates individuals’ freedom of assembly and expression.

Journalists, like those detained in Shan State, must be allowed to gather news and operate in all areas of the country in order to make the public aware of important issues, such as Burma’s civil war, to keep the Government accountable for their actions. Due to the prevalence of ethnic groups in Burma, travelling in territories controlled by EAGs and having contact with their members is often unavoidable. Sections 17/1 and 17/2, which foster the violation of basic human rights, stifling opposition to Burmese authorities, has no place in Burma’s new era of civilian governance, and if democratic transition is going to occur this law, along with others, requires urgent amendment.

While conducting inspections of jail cells in police stations and courts in Lashio and Hsipaw, as part of a broader mission to inspect prisons in Burma nationwide, members of the Myanmar National Human Rights Commission (MNHRC) interviewed the detainees on August 9 at the Hsipaw Prison to investigate the legality of their detention. Following the interview with the defendants, MNHRC Commissioner Yu Lwin Aung described details of the prisoner’s pretrial detention to media as revealed to him by the prisoners. The journalists affirmed that following their arrest they were held incommunicado at a military base in Namhsan Township, Shan State for more than 24 hours, where they were held without food for one day, forced to sleep on a concrete floor for one night, and were not remanded before a magistrate, violating Section 61 of the Code of Criminal Procedure for being detained for longer than 24 hours as well as Articles 9 and 10 of the Universal Declaration of Human Rights (UDHR).

In late August, the MNHRC forwarded their findings on the conditions of 14 prisons inspected by the Commission, to the Ministry of Home Affairs (MoHA) and made recommendations to the Ministry of Defense (MoD) regarding the case of the three detained journalists and three detained civilians detained in Shan State. The MNHRC recommended to the MoD that no legal action should be taken against the journalists who covered the drug burning ceremony, that was also attended by locals as well as public servants. AAPP strongly urges the MoHA and the MoD to accept the findings of the MNHRC’s investigation and take action to secure the immediate and unconditional release of the three journalists and their three civilians aides who remain detained in Shan State as victims of arbitrary arrest and arbitrary detention.

The six defendants, who have been detained for more than two months, were denied bail on August 4 and 18 by the presiding Judge at the Hsipaw Township Court, who cited national security concerns and fears that releasing the men on bail might prolong their trial. Seeing as how the defendants did not allegedly commit a violent ‘crime,’ fears of releasing them on bail due to a matter of concern for national security are baseless. It is an unfortunate irony that the defendants should not be released because of concerns that their trial might be prolonged because their trial has indeed been prolonged by the side of the prosecution. Prosecution witnesses Major Myat Mon Aung and Lieutenant Thaw Zin of the Military were not in attendance at the defendant’s’ third trial hearing on August 11, meaning the trial will likely be prolonged so that their testimonies can be heard at another date.

The six individuals being convicted of breaking the law pose no risk to society nor national security and therefore should be granted bail immediately. In Burma, it is common for trials to be deliberately dragged out, causing agony for those who are kept in detention in often squalid conditions. By way of example, Central Committee Member of the All Burma Students’ Democratic Front (ABSDF), Min Htay, who was arrested on December 28, 2016, over charges under Section 17/1 of the Unlawful Associations Act remains detained in Bhamo Prison in Kachin State and is still on trial as of writing, more than six months after his arrest. Further, on August 4, The Voice Daily Editor Kyaw Min Swe, who is on trial for charges under Section 66(d) of the Telecommunications Law and Section 25(b) of the News Media Law, was released on bail, after 9 bail requests were previously denied. He was originally arrested on June 2 in relation to charges filed against him by Lieutenant Colonel Lin Tun, for allegedly ‘defaming’ the Military in a satirical article published in a March edition of The Voice Daily that questioned Burma’s peace process.

Kyaw Min Swe’s case illustrates further serves to demonstrate how the Military continues to make use of repressive legislation like Section 66(d) to stifle criticism and freedom of expression, despite the supposed democratic reforms in Government. This trend has contributed to what members of the media have termed a return to ‘A climate of fear’. Worryingly, cases filed against members of the media under Section 66(d) by Government officials or Military officials have increased significantly since the civilian led Government took office in 2016. According to the New York Times, the Government has filed cases under Section 66(d) 65 times since the law was enacted. Members of the media in Burma worry, as they did under previous Military Regimes, that they may be prosecuted for speaking out against the Government or the Military or reporting on sensitive issues, such as Burma’s ongoing civil war.

Though the civilian led Government that took power last year was elected based on its pledge to defend human rights and foster the democratic change that citizens of the country had long awaited, the promise largely remains unfulfilled. Human rights, which are supposed to be protected in a democracy, are far from being guaranteed, especially for members of the media who remain at an even higher risk, under repressive legislation like Section 66(d), due to the nature of their work.

On August 29, Parliament passed a Bill making minor amendments to Section 66 of the Telecommunications Law, leaving however, the most controversial and criticized components of the law intact. As amended, an offense under Section 66(d) will now carry a maximum sentence of two years, rather than three years in accordance with the Code of Criminal Procedure, which stipulates that bail shall not be issued for offenses that carry sentence of three years or longer. An offence under Section 66(d) will now be ‘bailable,’ however, the amendment does not guarantee the issuance of bail, which is notable because there is still no apparent standard criterion for the granting of bail in Burma’s judicial system. Therefore, the amendment falls short of securing bail for defendants, an important factor for defendants’ due to the fact that trials are often prolonged.

Third parties will now be prohibited from filing cases under Section 66(d) unless they are acting with the legal permission of the ‘defamed’ individual. From 2015 until the amendment recently took effect, AAPP estimates that of the cases we have been tracking since October 2015, 70% of cases filed under Section 66(d) were done so by third parties. The rampant use of Section 66(d) in the past was attributable to this provision that allowed any individual finding content posted online to be offensive, untrue or objectionable, who was not necessarily the subject/target of the post, to file a criminal lawsuit against the author of the content.

The term “defaming” has been preserved, which is what the vast majority of individuals are charged under. Since the term ‘defamation’ has not been precisely defined in the Telecommunications Law, the clause is left open to interpretation, which unduly results in its continued overuse. Since the defamation clause remains a vague offence under the law, the amendment’s impact on how the law will be used in the future is likely negligible. Section 80 of the law, which recognizes offences under the law as cognizable, remains unchanged. This means that an individual convicted of online ‘defamation’ may still be arrested and detained without warrant at any time and be criminally prosecuted under Section 66(d), which remains overly vague.

In August, CSO’s were outspoken on social media in their opposition to the amendments to Section 66(d) and the law in general. For months, Section 66(d) has been the target of criticism and in June AAPP, along with 60 other international and domestic human rights organizations, released a joint calling for the law to be repealed or significantly amended, to clarify its vagueness, and ensure that defamation not be considered a criminal offense since it does not warrant the deprivation of one’s liberty.

Days after the amendments were passed in parliament, Mandalay-based freelance journalist Zaw Moe Htet was arrested on August 28 in relation to charges filed against him under Section 66(d) of the Telecommunications Law for posting ‘defamatory’ comments on Facebook about Kachin State Chief Minister Dr. Khet Aung. This most recent case is evidence that the minor amendments made to the Telecommunications Law are insufficient and that individuals are no safer now that they were before the law amended.