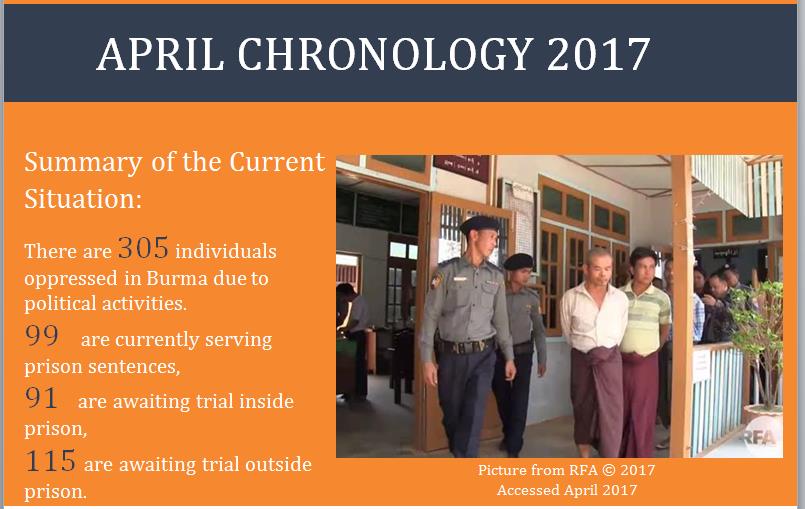 In April, individuals from ethnic areas continue to be accused of affiliation with ethnic armed groups (EAGs). On April 10, Abbot Nanda Thara and Khine Ni Min were arrested in Arakan State’s Mrauk Oo Township after a case was filed by a Light Infantry Battalion #540 under the Unlawful Association Act. The men had organized a football match dubbed the ‘Arakan Army Cup’ commemorating the founding of the Arakan Army in 2009. The men were charged under Section 17/1 of the Unlawful Association Act. Human Rights Defender and Deputy Information Officer of Arakan Liberation Party (ALP) Khaing Myo Htun was prosecuted after nine months in detention. On May 5, 2016, Lieutenant Colonel Tin Naing Tun of the Military filed a complaint against Khaing Myo Htun under Sections 505(b) and (c) of the Penal Code for sedition and incitement respectively, following a statement on behalf of the ALP on April 24, 2016, implicating the military for using civilian forced labor and committing international crimes against civilians in Arakan State. These charges go against the reconciliation measures initiated by the government, and violate the citizens’ fundamental right to freedom of association enshrined in Article 20 of the Universal Declaration of Human Rights (UDHR). AAPP therefore urges the government to proceed with the 21st Century Panglong Peace Conference to be held in May in an inclusive manner. This means involving all ethnic armed groups, including those which have not signed the National Ceasefire Agreement (NCA), in the discussions.
The organisation of the Conference should be prioritized to avoid the incidents like the United Wa State Army claiming “Inequality” because they were only given observatory passes.
For More Information
Assistance Association for Political Prisoners
Ko Bo Kyi : Joint Secretary +66(0) 81 9628 713