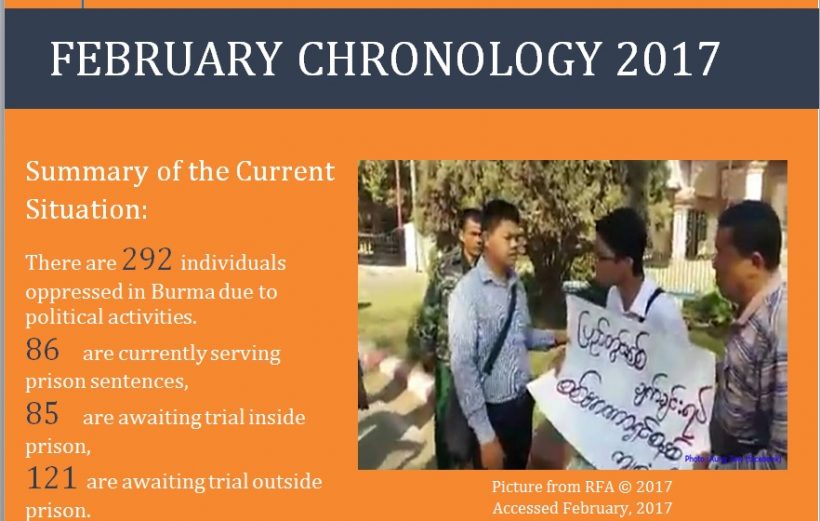 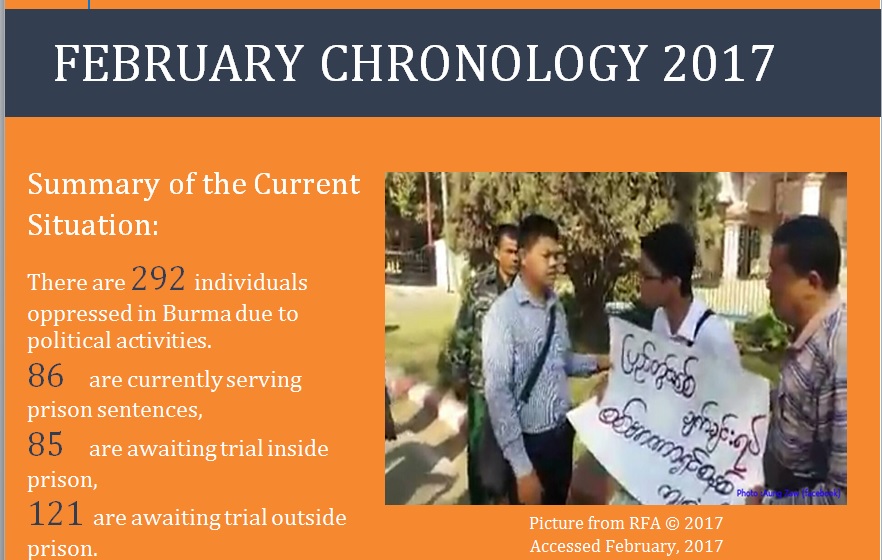 This month, 92 people were arrested, 90 of whom are from ethnic areas. In January, 42 people were charged, including 36 farmers, and six activists. Two people were sentenced in January. 17 individuals were released, 15 of whom are farmers. Two incarcerated political prisoners are reported to be in bad health.

People from ethnic areas continue to be accused of being associated with ethnic armed groups. On February 7, two Baptist Church officials Naung Lat and Gam Seng from Mong Ko Township, Kachin State, were charged under Section 17/1 of the Unlawful Associations Act by the Muse Township Court. They were arbitrarily taken into custody on December 24, 2016 and kept in secret detention for almost a month until January 19, 2017. The Court has added a new charge against Naung Lat and Gam Seng under Section 8 of the Export and Import Law, which prescribes a maximum of three years of imprisonment for exporting or importing restricted / prohibited goods or goods that require permission without due approval. These charges go against the reconciliation process between the government and ethnic minorities. AAPP therefore urges the Government continues to work towards national peace and reconciliation by moving forward with the second meeting of the 21st Century Panglong Peace Conference in an inclusive manner.  Individuals from ethnic areas also continue to be forcibly recruited into Ethnic Armed Groups. This can be seen this month in the forced recruitment of over 90 individuals into the Kachin Defense Army (KDA).

In February, farmers’ issues remained unresolved in Burma. On 23 February, 25 residents of Letpadaung in Sagaing Region were prosecuted under Section 19 of the Peaceful Assembly and Peaceful Procession Act, and Sections 143 and 431 of the Penal Code for unlawful assembly and causing mischief on a public road. On 21 February, the protesters blocked the road to the mine, and demanded that Wanbao Mining Copper Ltd. Company give them the 1,900 acres of land they were supposed to receive according to the recommendations of a Parliamentary commission in 2013. The land was to be granted as compensation to offset the damage to villagers’ crops, livelihood, and social standing as a

result of the construction of the project. The copper mine project is a joint venture between the Chinese Wanbao Mining Co. Ltd., the military-controlled Myanmar Economic Holdings Ltd. and the government of Burma. On November 29, 2012, over 70 monks and ten civilians, while staging a peaceful protest against the project, suffered injuries as a result of violent force used against them by Burmese security forces. U Thein Sein’s Government formed an investigation commission led by Daw Aung San Suu Kyi to resolve the matter. The villagers are claiming that the Company has breached the agreement signed in 2013 by not giving them the promised land.