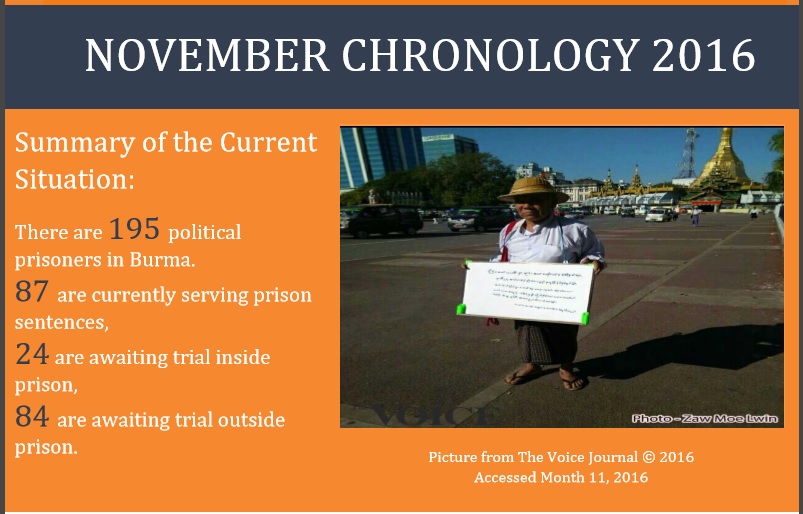 Summary of the Current Situation:
There are 195 political prisoners in Burma. 87 are currently serving prison sentences, 24 are awaiting trial inside prison, 84 are awaiting trial outside prison.
MONTH IN REVIEW
This month, 85 people were arrested, 84 of whom are from ethnic areas. Nine people were arrested under Section 66(d) of the Telecommunications Law. 18 people were charged, including 10 people under 66(d) of the Telecommunications Law. Two people were sentenced this month, and 13 individuals were released following the end of their prison sentences. Two incarcerated political prisoners are reported to be in bad health.
The Peaceful Assembly and Peaceful Procession Law is yet to become obsolete under the new Government. Solo protestor Khin Win (pictured on cover pager), was arrested under Section 19 of the Peaceful Assembly and Peaceful Procession Act for staging a protest, holding a sign requesting that President U Htin Kyaw and State Counselor Daw Aung San Suu Kyi meet with farmers facing difficulties due to decreasing prices of rice fields. He was arrested under Section 19 for failing to obtain prior permission for the protest.
The Telecommunications Law continues to be used to crack down on individuals expressing their opinions on social media. This month, Naypyidaw based Journalist Maung Maung Tun was arrested on November 29 for defamation under Section 66(d) of the Telecommunications Law (hereafter: Section 66(d)) for criticizing former state-aligned journalist Zaw Min Aung. Kyaw Kyaw Nyan Win, Press Officer of the National League for Democracy (NLD), was detained on November 21 under Section 66(d) for a post on Facebook alleging misappropriation of relief aid by a village administrator. Shein Min Paing also shared Kyaw Kyaw Nyan Win’s post on social media. For this, on November 21, he was also detained at Pyay Township Court. Both were subsequently granted bail at the price of 2 million Kyat (US$1,524). Than Htut Aung (CEO) from Eleven Media Group (EMG) and Wai Phyo (Editor In-Chief) were arrested on November 11, also under Section 66(d), and sent to Insein Prison. They were denied bail twice despite serious health concerns for Than Htut Aung. Myo Yan Naung Thein was arrested on November 3, for violating Section 66(d) and sent to Insein Prison. On November 29, Sandy Myint Aung, was arrested after a defamation suit was filed against her by Lin Lai Lai Hlaing, a member of the NLD Information Committee in Pegu, alleging Sandy Myint Aung insulted State Counselor Daw Aung San Suu Kyi on Facebook. She remains detained awaiting her next trial scheduled for December 7. Wai Yang Kaung, who is in charge of discipline and security of the NLD youth group in Katha District, Sagaing Division, appeared in court twice in November under Section 66(d) for insulting Sagaing Region chief minister, Dr. Myint Naing, and MPs with insulting language. Tin Po, from Pengase Village in Sagaing Township was charged under section 66(d) on November 2 for a Facebook post allegedly defaming Administrator of Pengase Village Nay Win Soe. He was arrested and detained without bail for the offense on October 27.
Restrictions on freedom of speech have continued in November. Activists distributing pamphlets calling for the amendment of the Telecommunications Law were told, on November 3, that they would not be allowed to continue their campaign by Zabu Thiri Township officials.
Charges and sentences under repressive legislation continued to be handed down at the expense of activists. On November 11, Hla Phone was sentenced to two years’ imprisonment in Rangoon’s Mayangone Township under Section 66(d) of the Telecommunications Law, Section 505(b) of the Penal Code, and Section 16 of the Union Flag Law for defaming the military. On November 18, Social and political activist Yar Pyae aka Myo Thu Win was sentenced to six months imprisonment but was released the same morning for time already served since his arrest. 12 labor right protestors, from Sagaing Region who were sentenced to five months imprisonment by a court in Naypyidaw’s Tatkon Township on October 24 with unlawful assembly under Sections 143 and 145 of the Penal Code, and with sedition under Section 505 (b) of the Penal Code, were released on November 12. They are now fighting to get their jobs back at the Myanmar Veneer and Plywood Company where they were previously employed. Freedom of Press and Freedom of Expression continue to be under threat in Burma following the dismissal of Myanmar Times Special Investigations Editor Fiona MacGregor this month. She was dismissed after government criticism of an article she wrote on October 27, 2016, reporting on the alleged rape of dozens of women by security forces in Shey Kya, a village in Arakan State’s Maungdaw Township.
The Unlawful Association Act continues to be a tool for the arrest, detention and charge of civilians accused of being part of unrecognized organizations and ethnic armed groups. Four members of the Shan State ArmyNorth (SSA-N) have been detained since November 4, 2016. The men were arrested by the Burma Army at a checkpoint, before being handed over to police and charged under Section 17(1) of the Unlawful Association Act, despite being unarmed and dressed in plain clothes. On November 20, eleven villagers from Namtu Township were arrested by the Ta’ang National Liberation Party (TNLA). They were accused of being informants for the Restoration Council of Shan State (RCSS), and its armed wing, the Shan State Army South (SSAS). On November 2, 19 villagers were detained by the armed group of the Shan State Progressive Party (SSPP), The Shan State Army North (SSA-N) to be recruited as SSA-N members for forced military service. A promising advancement in November was the official amendment of the ‘Midnight Inspection’ provision (Section 13(g) of the Ward or Village Tract Administration Law), which required households to notify authorities of any overnight guests on November 21.
For more information:
Assistance Association for Political Prisoners
Tate Naing (Secretary) +66(0) 812878 751
Bo Kyi (Joint Secretary) +95(0) 9425308840