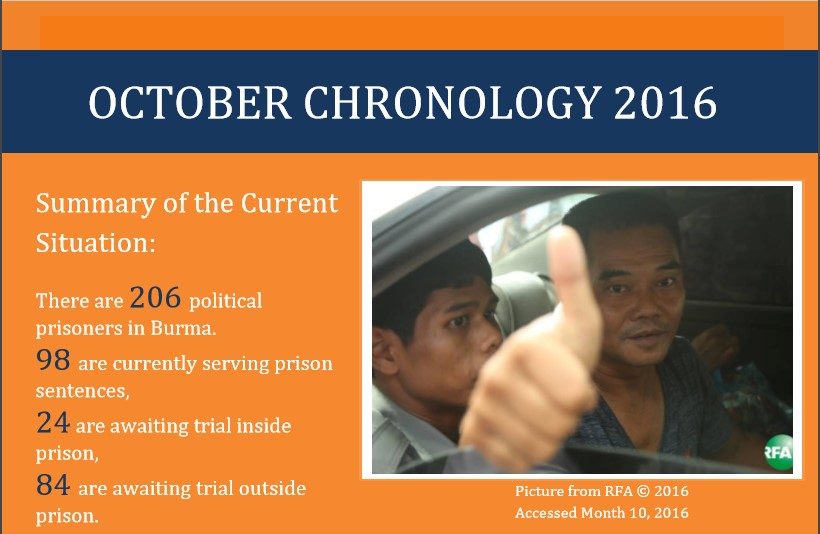 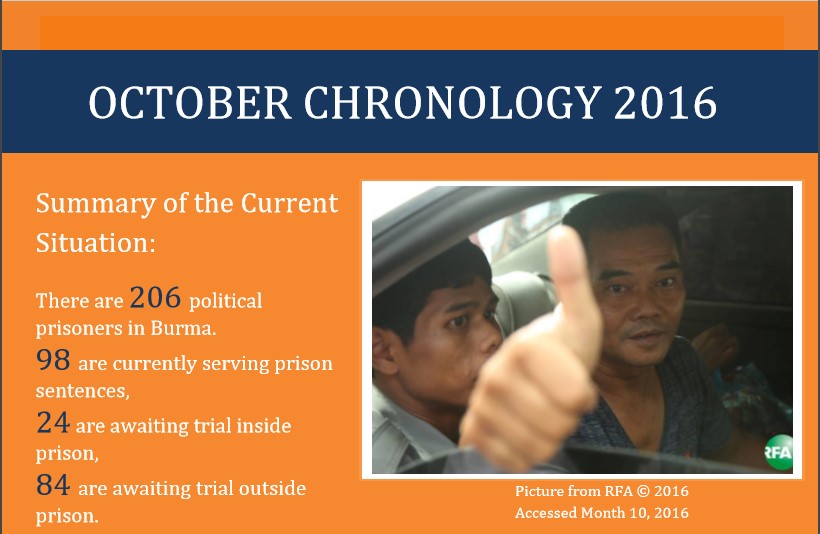 MONTH IN REVIEW
This month, 63 people were arrested, 51 of whom are from ethnic areas, 18 people were sentenced, three of which were immediately released after paying their fine.  This month saw three individuals released following the end of their prison sentences, 62 people charged, and two incarcerated political prisoners are reported to be in bad health.
The Telecommunication Law and the Penal Code continue to be used as major tools for detaining, sentencing and charging political and labor rights activists. Aung Myint Tun, a member of NLD in Monywa Township, Sagaing Region, was arrested on October 13, under Section 66(d) of the Telecommunication Law for posting an inaccurate Facebook status regarding the resignation of Central Executive Committee member Win Htein. Moreover, on October 26, Htin Kyaw (pictured on the cover page), leader of the Movement for Democracy Current Force (MDCF), was arrested under Section 505(a) of the Penal Code. He declared he was arrested in connection with his statement made at North Okkalapa Township Court on October 21, on the unfair judicial system, human rights violations and criminal offences committed by the military. On October 24, Sagaing Labor Right Protesters (12 men and three women), were sentenced with unlawful assembly under Articles 143 and 145 of the Penal Code and with sedition under Article 505(b) of the Penal Code. The court later dismissed the sedition charges against the three women. The 12 men were sentenced to five months imprisonment, while the three women received two months each.
The Peaceful Assembly and Peaceful Procession Law has is yet to become obsolete under the new Government. Indeed, on October 14, Lungjung Tu Raw, a Kachin Baptist Convention’s consultant, was charged under Article 20 of the Peaceful Assembly and Peaceful Procession Law and sentenced to pay a 1o,000 Kyat fine (US$7.76), which he paid on the same day. Moreover, on October 25, activist Naing Zaw Kyi Win was charged under Article 19 of the Peaceful Assembly and Peaceful Procession Act by the Shwe Pyi Thar Township Court for organizing and staging a peaceful protest with students, workers and civilians to stop the civil war in Burma.
Restrictions and sentences on media have continued throughout October. Independent media are restricted from gathering news in Shan State Parliament, while government media and TV channels can do so. The military is reported restricting the movements of independent journalists in Arakan State who are attempting to report on the military operations following the attack on a border guard post on October 9. Further, on October 11, two editors from Khum Sarr Ngung Pa-O journal were fined 30,000 Kyat (US$23.29) each by the Pin Laung Township Court in Pa-O Autonomous Region. They were charged, on July 30, under Article 500 of the Penal Code for defaming the Pa-O National Organization (PNO).
Farmers continued to be prosecuted and arrested throughout October. Indeed, on October 23, two men from Mandalay were arrested because they were supporting a ploughing protest held by local farmers, protesting for the recovery of their lands. They were charged on October 24. Furthermore, on October 26, a local farmer involved in the ploughing protest, was arrested and charged for trespassing and staging a protest.  On October 28, seven farmers, involved in the same protest, from Naung Hlaing Village Tract, Thapyay Yay Village, were arrested under Article 114, 427, 447 and 506 of the Penal Code. In addition, four residents of Yebyu and Myiek Townships in Tanintharyi Division were sued by Asia World and Shwe Padonmar for trespassing on land that was confiscated from villagers and given to the corporations for palm oil plantations.
The Unlawful Association Act continues to be a tool for the arrest, detention and charge of civilians accused of being part of unrecognized organizations and ethnic armed groups. On October 7, Aung Min Soe from Phyu Township, Bago Division, was arrested in the border town of Mae Sot, Thailand, for alleged association with a splinter group of the Democratic Karen Benevolent Army (DKBA), carrying ordnance and recruiting members for the DKBA. He was charged on October 9 under Article 17(1) of the Unlawful Association Act. Moreover, on October 11, 49 Kachin locals, accused of attending Kachin Independence Army (KIA) militia training, have been detained by the Burma Army and charged under the Unlawful Association Act.
Finally, two villagers from Mong Si Village, Kutkai Township in Shan State, were detained by the military on October 17 on suspicion that they were providing assistance to the Kachin Independence Army (KIA), in violation of the Unlawful Associations Act.
For More Information
Assistance Association for Political Prisoners
Tate Naing           Secretary             +66(0) 81 2878 751
Bo Kyi           Joint Secretary             +66(0)81 9628 713