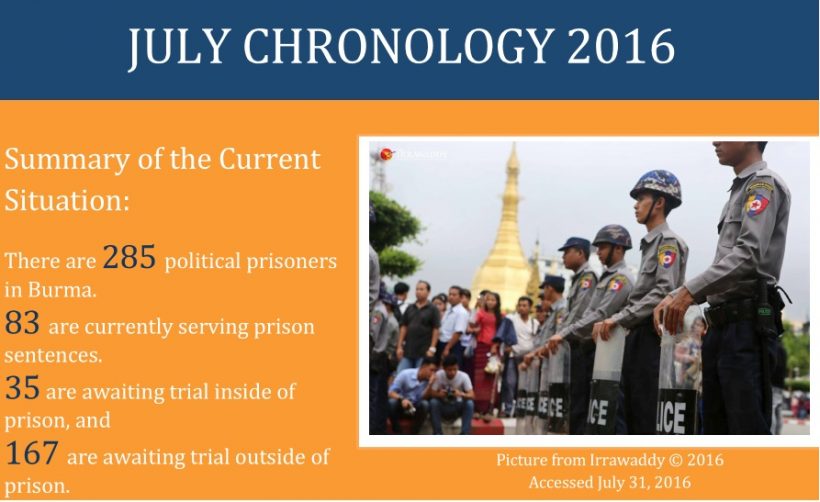 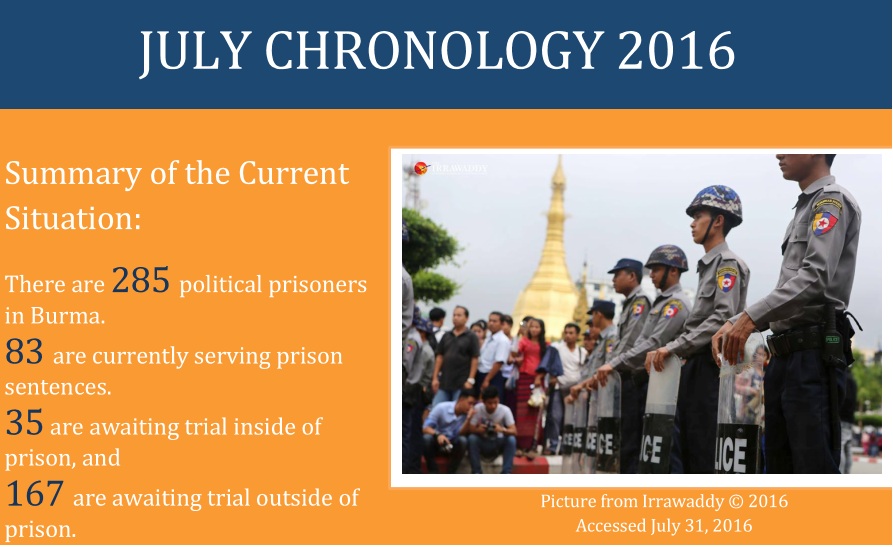 This month 129 sentences were handed down for political reasons, including fines given to 105 farmers for staging a
plowing protest. Four political prisoners were released from prison, and a further 110 people, including the
aforementioned farmers completed their sentence or had cases against them dropped. One person was arrested,
two political prisoners are reported to be in bad health and trespassing charges were brought against 131 farmers.
Charges and sentences under repressive legislation continue to be handed down at the expensive of activists,
farmers and ethnic minorities. Land activists and farmers continue to fight the authorities over disputed land, and
have been slapped with trespassing charges under Article 447 of the Penal Code as a result. On July 13, the 15
laborers and students currently facing trial in detention for their involvement in the Sagaing labor rights protests
were they were sentenced for contempt of court. They boycotted their hearings for the fifth time on July 27, as
they feel they do not receive adequate legal protection. The Unlawful Association Act continues to be a tool for the
arrest, detention and sentencing of civilians accused of being part of unrecognized organizations and ethnic
armed groups. This month, three Arakanese were convicted for alleged connection with the Arakan Army
(AA) under Section 17(1) of the Unlawful Association Act, two of them to three years imprisonment with hard labor
and the other to two years imprisonment with hard labor. Moreover, arbitrary arrests of civilians by the Burma Army and Ethnic Armed Organizations continues in ethnic areas. The Palaung State Liberation Front/Ta’ang National Liberation Army (PSLF/TNLA) reported that RCSS/SSA arrested over one hundred Ta’ang civilians on July 26. Restrictions on media, civil society freedoms and civil and political liberties have continued this month. Khine Myo Tun, former Second Information Officer of the Arakan Liberation Party was arrested on July 25. He was charged under Article 505(b) and 505(c) of the Penal Code for sedition and incitement relating to a report he released accusing the Burma Army of human rights violations in Arakan State.
Two reporters and one farmer have been sentenced for publishing a story about the confiscation of land by a
lieutenant colonel under false pretenses in September 2013. Moreover, political conferences and workshops were
stifled by authorities. The Karen State Government banned the Karen National Union workshop, aimed at
explaining the local land policy to residents and to raise awareness for their land rights campaign. In addition,
Southern Chin State authorities cancelled a conference planned by the Organizing Committee of the Southern
Chin State without any explanation. The conference was intended to foster cooperation among the four
participating townships on ethnic Chin affairs.
July also saw some promising advancements in the human rights context. The month began with the release of former Saffron Revolution leader, U Gambira who was released after completing his 6 month sentence. The Ministry of Labor, Immigration and Population’s removed the names of 600 people (more than 200 Burmese and 300
foreigners) from Burma’s blacklist as part of the 100 day plan. In an unprecedented case the military claimed
responsibility for five of the seven killings that took place in Mon Yaw village in Shan State on June 25. Following
the admission they announced that they intend to investigate and hold the perpetrators accountable in a
military tribunal.