Home > Press Release > REPORT LAUNCH: “After Release I had to restart my life from the beginning” (2016)

REPORT LAUNCH: “After Release I had to restart my life from the beginning” (2016) 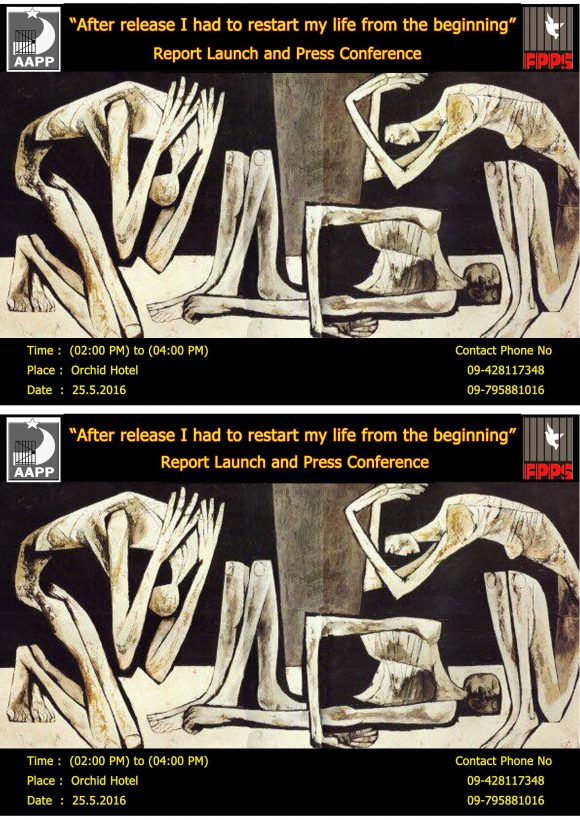 AAPP and FPPS launch report entitled ‘“After Release I had to restart my life from the beginning”: The Experience of Ex-political Prisoners in Burma and Challenges to Reintegration’

The Assistance Association for Political Prisoners (“AAPP”) and the Former Political Prisoners Society (“FPPS”) has today – 25 May 2016 – published a report entitled, ‘“After release I had to restart my life from the beginning”: The Experiences of Ex-political Prisoners in Burma and Challenges to Reintegration’. The report is available for download on AAPPs website in English and Burmese.

The report depicts the grim reality political prisoners are forced to live in post-release and their barriers to reintegration including their mental and physical struggles; social stigmatization; travel restrictions; denial of education and employment opportunities; financial hardships; social exclusion; family tensions and ongoing health issues.

Finally, the report makes a number of key policy recommendations to the new Burma Government in terms of providing reparations to ex-political prisoners and their families as part of transitional justice.

AAPP and FPPS hope that this report will raise awareness and build understanding of the plight of political prisoners. We urge the Burma Government to implement the report’s recommendations by providing recognition, restitution, and rehabilitation for ex-political prisoners and to establish truth-seeking measures to work towards national reconciliation. In addition, we reiterate calls for the government to review, revoke and redraft repressive legislation used to detain activists to ensure an end to the cycle of repression. AAPP and FPPS urge political parties, civil society groups and the international community to stand with us in our efforts to ensure the Burma Government heed to these calls.