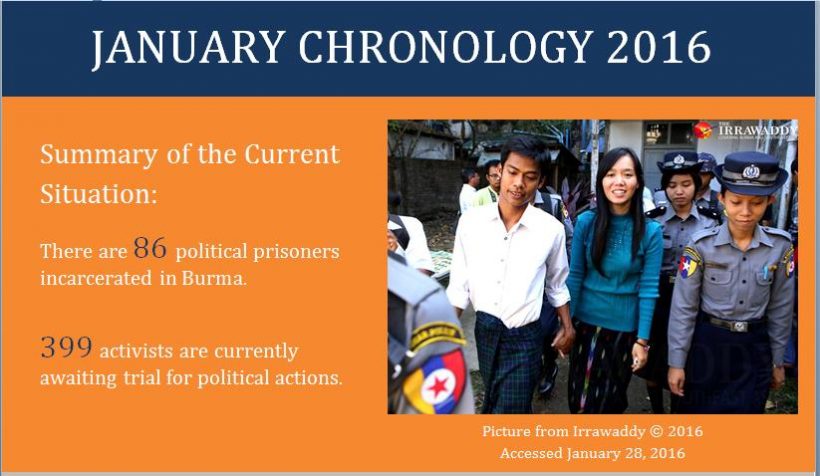 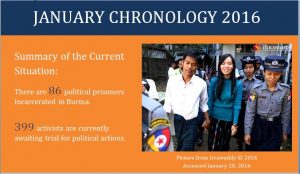 MONTH IN REVIEW
This month, seven political activists were arrested in total, 12 individuals were sentenced, and 69 were released. Nineteen political prisoners are reported to be in bad health.
After encountering sustained pressure from international governments and human rights groups, the Presidential Office decided to release 52 political prisoners on January 22 as part of a presidential amnesty.
However, as those released in the amnesty walked free, dozens were arrested and sentenced for their political actions this month and a plethora of lawsuits and new charges were stacked on activists- particularly the Letpadan students- for protests that occurred months ago. Despite the presidential amnesty on January 22 32 new lawsuits were filed against political activists before the end of the month. The majority of these were under Section 18 of the Peaceful Assembly and Peaceful Procession Act.
On January 26 the Chan Aye Tharzan Township court decided to accept Section 18 charges against Kaung Zaw Hein and Shine Min Htet Zaw, and Ye Yint Paing Hmu for a protest they staged in March 2015 to demand the release of students and supporters involved in the National Education Bill protests. Ye Yint Paing Hmu, was also sentenced this month to six months in prison for his involvement in the infamous graffiti protest in June 2015. On the same day ten students involved in National Education Bill Protests in August 2014 were informed that new lawsuits had been filed against them under Section 18 on January 26. Similarly student activist Zayar Lwin has had at least three more lawsuits filed against him under Section 18 this month for protests that happened in 2014. Belated charges under Section 18 were also brought against jailed activists Naw Ohn Hla and Tin Htut Paing this month for their involvement in a protest on August 8, 2014 to commemorate the 26th anniversary of the 1988 uprising.
While Section 18 of the Peaceful Assembly and Peaceful Procession Act was used to prolong the jail time of those already imprisoned, two more new sentences for ‘online defamation’ were handed down under Article 66(d) of the Telecommunications Law. Despite multiple bail attempts being denied and his worsening health condition Kachin peace activist Patrick Kum Ja Lee received a 6 month sentence under Article 66(d) of the Telecommunications Law for defaming the military via a Facebook post. A businessman, Zaw Myo was sentenced to one year imprisonment with hard labor under two counts of Article 66(d) of the Telecommunications Law and Article 505(b) of the Penal Code for a similar Facebook post.
Also of great concern this month was the re-arrest of former Saffron Revolution leader U Gambira aka Nyi Nyi Lwin who was arrested and detained on immigration charges that many presume are politically motivated.
Of ongoing concern are the health conditions of many of Letpadan protesters detained at Tharyarwaddy Prison. A new report released this month drew attention to the failure to provide adequate treatment to detainees with potentially life-threatening medical conditions. This followed news this month that multiple students had been transferred back to prison from hospital despite requiring further treatment. Two of these protesters, however, Mya Gyi and Htein Lin Aung were eventually granted bail this month due to their worsening health condition.
DETENTIONS
Arbitrary Arrest of Eleven Villagers in Northern Shan State
Eleven villagers from Lwae Sar village, Kyaukme Township, Northern Shan State were arbitrarily arrested by Restoration Council of Shan State/ Shan State Army (RCSS/SSA), after clashes between the Ta’ang National Liberation Army (TNLA) and RCSS/SSA on January 17. The villagers were arrested because they were thought to have contacted the TNLA. Some were forced to carry property as porters for the troops.
Villagers were tortured and threatened by RCSS/SSA troops during the clash. As a result, most of the villagers have decided to flee to Monglon Township and Mogoke Township.
(Internal Source: Ta’ang Women’s Organization)
Arakanese people Arrested for Insurgent Activities
Four Arakanese men have been arrested and detained on suspicion of association with the Arakan Army. Sources say that on January 16, Hsan Win Tun and Arno alias Kyaw Soe Moe were blindfolded and taken into custody by army personnel. It has also been reported that on January 9, two other Arakanese men were arrested in Taungup on similar grounds.
(18 January 2016 – Narinjara/Burmese) (19 January 2016 – Narinjara) (23 January 2016 – Narinjara/Burmese) (25 January 2016 – Narinjara) (25 January 2016 – Burma News International)
For More Information
Assistance Association for Political Prisoners
Tate Naing       Secretary  +66(0) 812878 751
Bo Kyi        Joint Secretary +66(0) 81 9628 713