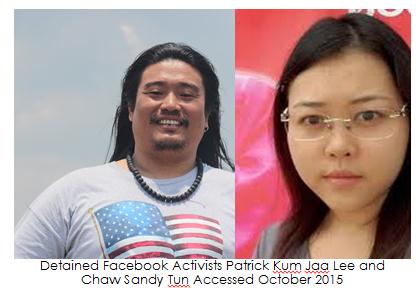 Summary of the Current Situation
As of the end of October, there are 112 political prisoners incarcerated in Burma and 486 activists currently awaiting trial for political actions.

MONTH IN REVIEW
This month, 10 political activists were arrested in total, eight of whom are detained. Thirty-One were sentenced, and eight were released. Nine political prisoners are reported to be in bad health.
The Letpadan case was still not resolved this month, and 61 students and activists remain detained for charges relating to their participation in the National Education Bill protests in March. Fortify Rights and the Harvard Law School International Human Rights Clinic released a report detailing the abusive tactics used by police officials in the violent crackdown. Aung Mhine Hsan, a student leader detained in Tharrawaddy Prison, also launched a hunger strike in response to demands by students for the release of political prisoners not being met. His strike has received attention inside Burma, with additional supporters joining him in hunger strike and others supporting him by holding demonstrations calling attention to his plight and the Letpadan case. Two student leaders from the Monywa District’s All Burma Federation Students Union, who staged one of the protests demanding the release of the Letpadan protesters, received charges under Section 18 of the Peaceful Assembly and Peaceful Procession Act. Prominent student leader Kyaw Ko Ko, who had been evading arrest was arrested and is currently detained for his involvement organising a protest in March against the violent dispersal of the student march in Letpadan.
On October 27, the Myanmar National Human Rights Commission released a statement saying the detention of the Letpadan students and protestors and the incarceration of political prisoners is preventing the upcoming election from being free and fair.
Despite concerns over the legitimacy of the upcoming election, new arrests continued this month. Lu Zaw Soe Win, Patrick Kum Jaa Lee and Chaw Sandy Tun were all arrested and detained for allegedly posting to Facebook images or insults defaming the government and received charges either under the Telecommunications Law or the Electronic Transactions Law. Patrick Kum Jaa Lee and Chaw Sandy Tun remain in detention. Maung Saungkha also received charges under the Telecommunications Law for posting a poem to Facebook allegedly defaming the President.
A specific case in which an election candidate was arrested this month, the month before the November 8 election, is noteworthy as well. Independent election candidate Myat Nu Khaing was arrested for her alleged participation in a peaceful demonstration held in December 2014. Her arrest, detention and denial of bail fall 10 months after the peaceful demonstration and in the middle of her campaign.
Verdicts were issued in many cases this month, often just long enough to imprison the sentenced until after the upcoming election. Thirteen land rights activists of Michaungkan Village were sentenced to four months imprisonment for a protest where they demanded the return of, or compensation for their ancestral lands which were confiscated by the military in the 1990s; five environmental activists were sentenced to five months for allegedly destroying mangrove trees; and the four graffiti students, Naing Ye Wai, Aung Hsan Oo, Git Too and Nyan Linn Htet, who wer arrested on July 1 for staging a protest against the new National Education Bill, were sentenced to between three and six months imprisonment.
In addition to the students, farmers and environmental activists, ethnic groups continued to express concern over the many individuals from ethnic minorities who are detained or imprisoned for charges under the Unlawful Association Act. On October 15, eight armed ethnic groups and the government signed the National Ceasefire Agreement, but the agreement has not yet led to the release of any of the members of the eight armed ethnic groups nor those imprisoned for their alleged association with the groups under the Unlawful Association Act.
(27 October 2015 – MNHRC)
For more information
Assistance Association for political prisoners
Tate Naing Secretary +66(0) 81 2878 751
Bo Kyi Joint Secretary +66(0) 81 9628 713