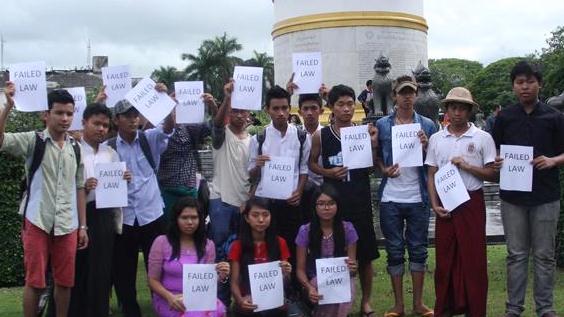 Summary of the Current Situation
As of the end of August, there are 108 political prisoners incarcerated in Burma, with 459 activists currently awaiting trial for political actions.

MONTH IN REVIEW
This month, 16 political activists were arrested in total, two of whom were incarcerated. Eleven were sentenced, and 12 were released. Four political prisoners are reported to be in bad health.
On August 11, the Thayarwaddy Township Court rejected the defence team’s motion to countersue two Police officers they alleged to have violated due process by illegally detaining students for 24 hours after their arrests. Ten students detained for their involvement in the Letpadan crackdowns were also denied bail.
Following their arrests last month All Burma Federation of Student Union (ABFSU) members Naing Ye Wai, Git Too, Nyan Linn Htet and Aung San Oo – accused of using graffiti on a wall of their university to denounce the crackdown of the student protests – have been denied their request for bail in order to sit their September exams. Naing Ye Wai launched a hunger strike on August 21 in response to this decision, and the four students were placed in solitary confinement as a result. In response, Yadanabon University Student Union announced that its students will boycott their exams in support of the four student’s request to sit their exams, and threatened more countrywide student protests.
On August 25, nearly 60 detained students from the Letpadan student protests regarding education reform issued a petition calling for legal action against the police involved in the crackdown on the protest in March 2015. The students argue that the police used unnecessary force during the peaceful protest which lead to the arrest of 127 student activists and their supporters. Khin Khin Kyaw, the lawyer for the detained students that signed the petition, said the police were responsible for the destruction of property during the crackdown as well as causing serious injury to students – many of whom were beaten with sticks.

Yanghee Lee, the UN Special Rapporteur on human rights in Burma expressed concern about the arrests of activists and journalists upon completion of her third official visit to the country. She criticized the selective use of Article 18 of the Peaceful Assembly Law and Article 505 (b) of the Criminal Code and also called for the immediate release of the all Letpadan student activists and an immediate end to the practice of arbitrarily arresting students, activists, farmers and workers and charging them on multiple counts for exercising their right to free expression.
(7 August 2015 – UNIC Yangon)  (8 August 2015 – DVB) (10 August 2015 – Mizzima) (11 August 2015 – Irrawaddy)  (25 August 2015 – RFA)
Contact Information:
Tate Naing, Secretary          +66 (0) 81 2878 751 (Thailand)
Bo Kyi, Joint Secretary          +66 (0) 81 9628 713 (Thailand)