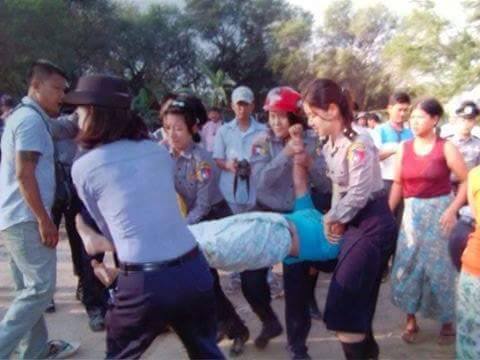 Summary of the Current Situation
As of the end of May, there are 163 political prisoners incarcerated in Burma, with 442 activists
currently awaiting trial for political actions.

MONTH IN REVIEW
This month, 49 political activists were charged in total, 41 of which were arrested and are currently being held in detention. Sixteen were sentenced, and two were released. Four political prisoners, Sai Tin Min Tun, Zaw Thet Aung, Yarzar Oo and Nay Myo Zin, have been reported to be in bad health.
This month, a solo protestor is being held in Tharyarwaddy Prison after being charged under Section 505 (b) for staging a solo protest; 32 people in Arakan State were arrested for alleged ties with the Arakan Army and charged with section 17/1; and five female landowners were arrested and charged under Article 333 for alleged participation in a riot against land confiscation in Mandalay Division.
The military court acquitted the two soldiers involved in the death of the freelance journalist Par Gyi killed during his detention by the Burma Army late last year. The two soldiers were facing charges under Article 71 of the Military Code (court martial procedures) and Section 304 of the Penal Code (culpable homicide). Even though the Myanmar National Human Rights Commission (MNHRC) suggested that a civilian court should hear the case, the military decided otherwise. This resulted in two parallel cases regarding the same facts. The military court freed the defendants unconditionally on May 8, 2015 but the civilian trial is still on going.
Meanwhile, Parliament voted on May 20 to continue the enforcement of the Emergency Provisions Act, which is often used to arrest activists. The law carries sentences of up to seven years in prison for diverse offences against the
State. The Lower House rejected the proposal to revoke it at 50 votes for, 256 against and 17 abstentions for the third time since the beginning of the reforms in 2011, arguing that the change would “throw the country into chaos”.
(11 May 2015 – DVB) (12 May 2015 – Mizzima) (21 2 May 2015 – The Irrawaddy) (25 May 2015 – DVB)

DETENTIONS
Solo Protester Charged and Held in of Tharyarwaddy Prison
Win Hlaing, a solo protester, was charged under Section 505 (b) and sent to Tharyarwaddy Prison on May 26, 2015. He was arrested for staging a solo protest in front of Tharyarwaddy Township Court where previous court hearings
were held.
(26 May 2015 – VOA/Burmese)
Massive Arrests for Suspected Arakan Army Connection
32 people suspected of being in contact with the Arakan Army (AA) have been arrested in Arakan State. 23 people were arrested in Kyauktaw, Kyaukpyu, Minbya, Pauktaw and Rathedaung Townships and sent to Kyauktaw Police Station for questioning on May 2. Most of the detainees confessed to being AA members during interrogation by the military but some of those arrested had no links with the AA and yet were still detained.
Three of the 23 arrested civilians are Win Maung, a village headman from La-Har-Kyel village; U Shwe Lone, a teacher from Nga- Saryne-Chaung Island; and Ko Myo Win Zaw, who worked at the Academy CD Rental Shop in
Minbya Town. They were arrested on suspicion of being involved with the AA in Minbya Township, Arakan State on April 28. The Township administrator and police head said they could not do anything because the army made the arrests. It is believed that the three were taken to Military Operations Command (MOC) base 9 in Kyauktaw. The police are still holding in detention a member of the committee of the Rakhine National Party, who was arrested
in Kyauktaw Township on April 29.
Nine more people allegedly present at an AA members meeting held near Aung-Lan-Chaung village in April, were arrested on May 20, 2015, according to Kyauktaw Township Police Major Khin Maung. Maung added that “a total of 32 people were arrested and they were charged under section 17/1. They were interrogated and
we are building the case against them. We requested legal advice on May 25, and the case will be brought to the court on May 28, depending on that advice.”
(21 May 2015 – DVB) (11 May 2015 – Burma
International News) (7 May 2015 – Burma News
International) (7 May 2015 – Myanmar Times)
(6 May 2015 – The Irrawaddy) (25 May 2015 –
RFA/Burmese)