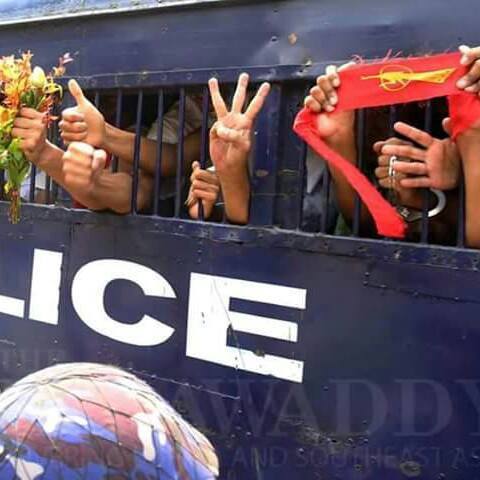 Summary of the Current Situation
March, 2015
As of the end of March 173 political prisoners remain incarcerated in Burma, with 316 activists currently awaiting trial for political actions. The government continues to disregard its responsibility to adhere to international human rights standards, and instead violates the rights of its citizens, oppresses media, and violently cracks down on any form of
dissent or opposition. The following chronology documents the political prisoner numbers from March and, in the light of the events related to the student demonstrations in Letpadan, gives a separate account of the extensive number of students and supporters arrested in relation to the March 10 crackdown.
MONTH IN REVIEW
This month in total 92 political activists were charged, 31 of which were arrested. 7 were sentenced, and 3 were released. Thousands of garment workers from Red Stone, Costec, E Land Myanmar, and Ford
Glory factories in Rangoon’s industrial zone have been striking against factory conditions and for better pay. Following violent action by police on March 5, 21 more protesters face charges for rioting and allegedly instigating the protests and face up to two years in prison if convicted. Two reporters were also arrested but freed shortly after.
The student protests against the New Education Law, which centralizes power with the government rather than the universities, took a new turn during the month of March.
On March 10, after a weeklong blockade in Letpadan Townships, students gathered there began their final march towards Rangoon, as
was initially agreed with local authorities.
However this resulted in a bloody and violent crackdown carried out by police, security forces and plainclothes thugs. They chased down the protesters, dragging them out of houses and monasteries. The crackdown was described by an Irrawaddy reporter at the scene as ‘a complete breakdown of police discipline’ with security forces split into two
groups—one faction attempting to exercise restraint over the other, who were attacking protesters indiscriminately. The police have also been accused of using civilian forces sporting red armbands to assist with the
breaking up of the student group. Following the crackdown, 133 were arrested around 2 Burma in connection with the student protests, throughout the month, 70 are still detained and 63 were released.
The violent crackdown has led to widespread national and international outcry, by Amnesty International, Human Rights Watch, the UN
and Special Rapporteur Ms. Yanghee Lee, and 130 organizations under the umbrella of ALTSEAN. However, President Thein Sein when giving an interview to the BBC stated that the security forces did not overstep
international laws and only beat student protesters after they were attacked.
In response to the events, students and supporters have launched an armband campaign to protest against violence and raise awareness about their rights for peaceful protests. They have reported being harassed by The Special Branch (SB) recording and interrogating the participants accepting a white armband.
For More Information
Tate Naing Secretary +66(0) 81 2878 751
Bo Kyi Joint Secretary +66(0) 81 9628 713