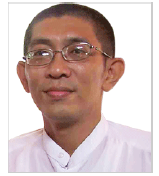 On November 27, 2014, the democracy movement in Burma lost one of its strongest proponents with the passing of Hla Myo Naung. A leading member of the 88 Generation Student Group, Hla Myo Naung has spent the last 26 years fighting for the rights and freedoms of all Burmese people, and has been persecuted by the government on countless occasions. His passing, at the age of 46, is grieved by AAPP, as well as all others committed to democratic change in Burma.

In the new millennium, Hla Myo Naung once again faced persecution for his ongoing activism. In October of 2006, he was a leader in the 88 Generation Student Group’s ‘White Expression Campaign’, and helped organize a petition which garnered more than 120,000 signatures calling for the release of five prominent student leaders. In the summer of 2007, Hla Myo Naung participated in the widespread demonstrations occurring in Burma, leading to his arrest on October 10, 2007. He would spend the next five years in prison.

Despite his incarceration, he remained defiant. His resilient spirit was demonstrated when he demanded, along with his codefendants, that they should not be handcuffed during the hearing and that their families, the public, and the media should be granted access to the trial. Later, he would refuse to respond to the judge’s request for a plea of guilty or not guilty, a ‘crime’ that would garner him a six month sentence. He was eventually sentenced to 65 years imprisonment. At this point, he had completely lost vision in one of his eyes due to an ongoing medical condition and was in serious need of treatment. He would suffer in prison until 2012.

Hla Myo Naing’s commitment to realizing political freedom in Burma has been unfaltering. In recognition of this commitment, him and his co-prisoners from the 88 Generation Student Group were awarded the “2008 President’s International Democracy Award” by the American Federation of Teachers in the United States. In passing, Hla Myo Naing leaves behind a son, who he fathered with Aye Mar. He also leaves behind an entire community of friends, colleagues and peers who will do their best to fulfill the dreams that he worked so hard to realize. AAPP extends its sincere condolences to his family and all those who considered him an ally in Burma.