Crimes Committed by the Terrorist Junta in November 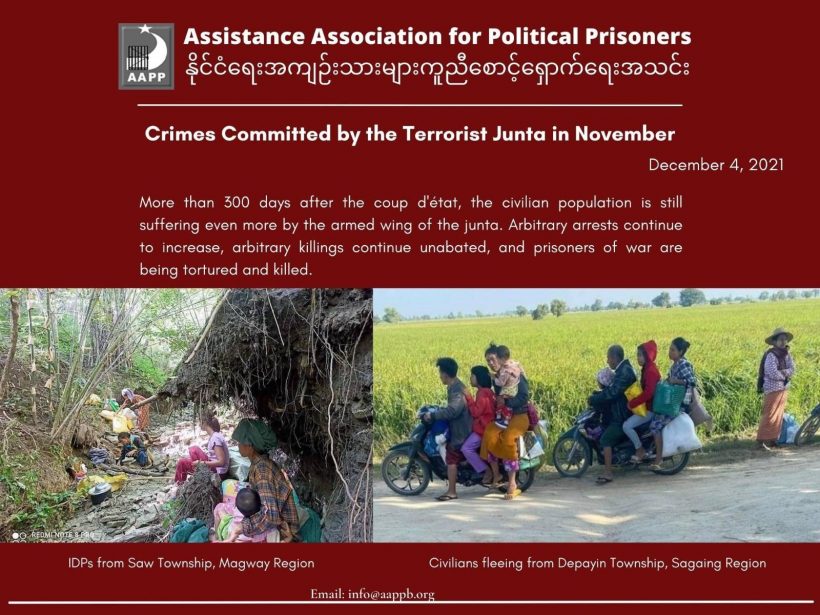 More than 300 days after the coup d’état, the civilian population is still suffering even more by the armed wing of the junta. Arbitrary arrests continue to increase, arbitrary killings continue unabated, and prisoners of war are being tortured and killed.

In November, at least (59) civilians including students, CDM workers and teachers were killed in the junta’s targeted attacks. This includes (5) women and (6) children, under the age of 18. Of those, (14) died as a result of torture.

According to AAPP documentation, (512) civilians were detained by the armed wing of the Junta between November 1 and 30. Of them, (109) women were detained, (22) children under the age of 18 and (34) were taken as hostages.

ShellingIn addition, thousands of locals from Sagaing Region, Chin State and Shan State are fleeing from their homelands due to heavy artillery firing into residential areas, and excessive use of force by the armed wing of the Junta.On the morning of November 3, Junta troops were stationed in Sitha village on the Kale-Gangaw Road fired artillery shells into Nat Chaung, Nat Myaung, Heloke and Chaung Gwa villages and some villagers were injured. Two social workers also got injuries when they came to rescue people by an ambulance who had been hit by artillery shells. Air StrikesBurma’s Junta has intensified its military offensive, not only with ground troops but also with air strikes, forcing about 10,000 villagers from 20 villages in Kyun Hla Township to flee their homes. On 27 November, in Depayin Township, Sagaing Region, the armed wing of junta opened fire with heavy artillery and furthered the attack with five helicopters, causing thousands of villagers to evacuate at least nine villages, and injuring several villagers.Arson

At least (473) buildings have been destroyed by arson in Thantlang Township, Chin State, since 9 September, which is one of the most resistant areas fighting Junta rule. Just in November at least (250) buildings were burnt down in Thantlang. In early November, several houses and barns were also destroyed by fire in Kale Township and Minkin Township.On November 2, at around 1 am, soldiers also burnt down a house to ashes owned by a member of the Dawei District Strike Committee in Sitpye Village, Launglon Township.

The military are committing inhumane atrocities against civilians, including heinous acts encompassing sexual violence. At the Kamyawkin Bridge checkpoint connecting Dawei and Launglone Townships, soldiers molested a woman during security checks, and verbally assaulted her using sexually improper language. A 62-year-old woman from Pha Khet village, Namt Pha Lon Village Track, Kutkai Township, Shan State was raped by a soldier from the 336th Infantry Division on 7 November. In addition, on the night of 11 November, in Aklui Khua village, Tedim Township, a woman who had just given birth and another woman who was seven months pregnant were repeatedly raped in front of their husbands by the Junta soldiers. AAPP understands there are many more undocumented crimes related to sexual violence committed by the junta.Property Seizures

Similarly, at least (84) properties owned by Hluttaw representatives, NLD members, and ordinary civilians such as houses and shops, were illegally seized by this illegitimate Junta in November.

This is but a summary of human rights violations committed by the terrorist junta group in November. In this climate of fear, many more atrocities have been widely perpetrated across the country, amounting to crimes against humanity.