Home > Slide show > Unprovoked shooting by the Junta since the coup

Unprovoked shooting by the Junta since the coup 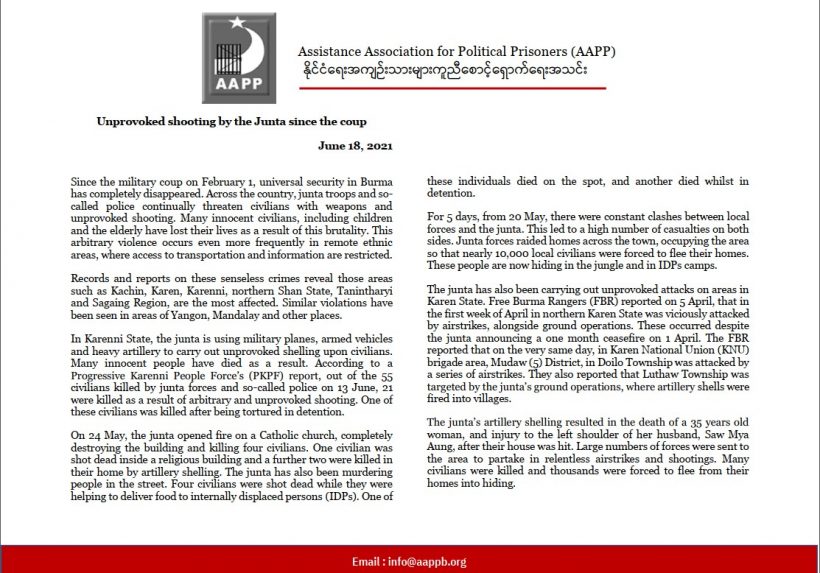 Since the military coup on February 1, universal security in Burma has completely disappeared. Across the country, junta troops and so-called police continually threaten civilians with weapons and unprovoked shooting. Many innocent civilians, including children and the elderly have lost their lives as a result of this brutality. This arbitrary violence occurs even more frequently in remote ethnic areas, where access to transportation and information are restricted.

Records and reports on these senseless crimes reveal that areas such as Kachin, Karen, Karenni, northern Shan State, Tanintharyi and Sagaing Region, are the most affected. Similar violations have been seen in areas of Yangon, Mandalay and other places.

In Karenni State, the junta is using military planes, armed vehicles and heavy artillery to carry out unprovoked shelling upon civilians. Many innocent people have died as a result. According to a Progressive Karenni People Force’s (PKPF) report, out of the 55 civilians killed by junta forces and so-called police on 13 June, 21 were killed as a result of arbitrary and unprovoked shooting. One of these civilians was killed after being tortured in detention.

On 24 May, the junta opened fire on a Catholic church, completely destroying the building and killing four civilians. One civilian was shot dead inside a religious building and a further two were killed in their home by artillery shelling. The junta has also been murdering people in the street. Four civilians were shot dead while they were helping to deliver food to internally displaced persons (IDPs). One of these individuals died on the spot, and another died whilst in detention.

For 5 days, from 20 May, there were constant clashes between local forces and the junta. This led to a high number of casualties on both sides. Junta forces raided homes across the town, occupying the area so that nearly 10,000 local civilians were forced to flee their homes. These people are now hiding in the jungle and in IDPs camps.

The junta has also been carrying out unprovoked attacks on areas in Karen State. Free Burma Rangers (FBR) reported on 5 April, that in the first week of April in northern Karen State was viciously attacked by airstrikes, alongside ground operations. These occurred despite the junta announcing a one month ceasefire on 1 April. The FBR reported that on the very same day, in Karen National Union (KNU) brigade area, Mudaw (5) District, in Doilo Township was attacked by a series of airstrikes. They also reported that Luthaw Township was targeted by the junta’s ground operations, where artillery shells were fired into villages.

The junta’s artillery shelling resulted in the death of a 35 years old woman, and injury to the left shoulder of her husband, Saw Mya Aung, after their house was hit. Large numbers of forces were sent to the area to partake in relentless airstrikes and shootings. Many civilians were killed and thousands were forced to flee from their homes into hiding.

On 3 May, in Bhamouk, in Kachin State, junta forces carried out a series of unprovoked shooting and airstrikes, killing a monk and 3 local civilians, including one child. As a result of these plane and helicopter attacks, many civilians fled their homes.

Due to recent clashes between junta troops and local forces in Mindat, Chin State, military forces have occupied the main areas in the town, setting up camps. On the night of 17 May, the junta’s artillery shelling on houses resulted in a nine year old boy being hit in his home. Continuous junta shooting meant he was unable to receive medical treatment.  Thousands of local were fleeing the city and hiding. There are only three IDPs camps in the city, meaning tens of thousands of local civilians have been forced into the jungle. These civilians face huge instability and are forced to move from one area to another. They face health problems and worsening food shortages.

On 27 March, in Dawei, Tanintharyi Division, in front of No 3 High School, the military shot at three young people who were on a motorbike on the opposite side of the road. 17 year old Mg Kyaw Min Latt, was shot and arrested. He later died in the military hospital.

On 23 March, in Aung Pin Lal Ward, Mandalay City, a seven year old girl was killed when her house was raided by junta troops. The 7 year old girl, Ma Khin Myo Chit, died from the gunshot wound as she held her father’s hand.

On 5 June, near Hlay Swe Village, Kyonpyaw Township, in Irrawaddy Division, the junta shot and killed a young man simply for refusing to stop his motorbike. The same day, at around 3am, a group of 50 junta soldiers carried out arbitrary shootings across Ban Bwe Village, Yinmabin Township, in Sagaing Division. Thousands of villages fled into the jungle.

Following a clash between junta troops and local forces in Kinma Village, Pauk Township, in Magway Division, on the evening of June 15, junta forces set fire to the entire village. Some elderly people were unable to escape the village in time, and died in the blaze. Among these were 88-year-old U Mya Maung and his wife, 82-year-old Daw Gyi May. Both suffered pre-existing health conditions and were unable to flee the village in time. The whole village was destroyed, devastating livestock and food supplies.

The above incidents are just some examples of the inhumane, unprovoked armed force which junta troops use against civilians every day. Such unprovoked killings are not only human rights violations, but are clearly also international crimes. The examples above show clear evidence of the junta committing genocide, crimes against humanity, and war crimes, all of which all classified as international crimes.

The junta’s targeted attacks on regional and ethnic groups are clear evidence of their ingrained practices of genocide. Their arbitrary arrests, torture, murders and forced violent movement of large populations are all crimes against humanity. Targeted attacks on civilian and welfare workers, and attacks on religious and cultural buildings are both war crimes. The junta regime targets these groups, and commits these acts with intent.

These severe crimes require an urgent and effective response from the international community. Inaction puts the lives and livelihoods of thousands more innocent civilians in Burma at risk.