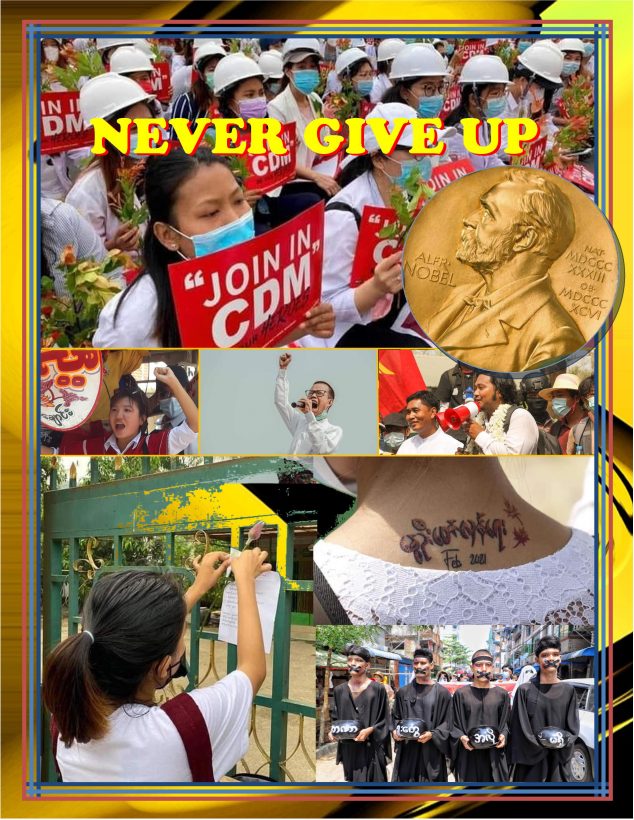 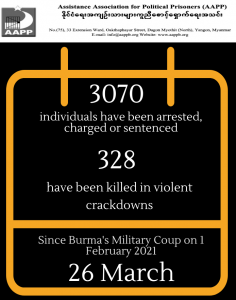 As of March 26, a total of (3070) people have been arrested, charged or sentenced in relation to the attempted military coup on February 1. (328) people are now confirmed killed by this junta coup.  AAPP documented (8) fallen heroes today.

(24) coup detainees have been convicted. (117) have been charged with a warrant and are evading arrest. We have not completed verification of all recently released detainees over the last 2 days, but are continuing to update the list of names who were released. Of the fallen heroes, (4) were shot dead today in Myeik, Tanintharyi Region, (2) fallen heroes died today from serious injury sustained in Mohnyin Town in Kachin State and Kyauktaga Township in Bago Region yesterday, (2) others were confirmed killed on previous days. This is the number documented and verified by AAPP, the actual number of casualties is likely much higher. We will continue adding as and when.

A group of six professors in social science at the University of Oslo in Norway nominated the Civil Disobedience Movement of Myanmar for the Nobel Peace Prize. CDM workers are facing repression, arrests, lawsuits, dismissals, and forced eviction from staff housing on a daily basis. However, the movement has not given up and continues to fight. We, the Assistance Association for Political Prisoners (AAPP) warmly welcome this submission for the Nobel Peace Prize. US Ambassador Thomas Vajda and his wife Ms. Amy Sebes laid a wreath today in front of a school where 23-year-old network engineer Nyi Nyi Aung Htet Naing died on February 28, 2021.

Although it has been 54 days since the coup, civilians are still subject to various forms of brutal repression by the junta, but demonstrations continue. Deaths, injuries, arrests, even against children and torture, as does destruction, arson, looting and raids also are deteriorating day after day across Burma. In the early morning of 26 March, the National League for Democracy (NLD) party headquarters in Shwegondaing, Bahan Township, Yangon region was set on fire.

Home in a village in Laung Lone Township, Dawei District, was set on fire on March 21, leaving seven family members severely injured. Among them, was a 14-year-old boy who died.

Today, civilians were killed across Burma in violent crackdowns of protests by the junta, in Kyauk Myaung, Tamwe Township, and Kyauktada Township, Yangon Region, Dawei Township, and Myeik Township in Tanintharyi Region. In Myeik Township, a large number of junta forces, including the Air force and Navy, used live ammunition to suppress people. Moreover, an ambulance vehicle was used to storm into protestors, four civilians, including one woman, were shot dead, and at least ten civilians were injured. Some civilians were violently arrested. During arrest, two youths were tied up with a piece of rope on their back and treated like dogs.

In Kyat Sar Pyin Ward, Dawei Township, Tanintharyi Region, one civilian was injured with live ammunition and two civilians were arrested. In Kyauktada Township, Yangon Region, 5 people were arrested for marching on strike. During the arrest of a student in Dawei Township, the junta raided the house and looted gold, a motorcycle, money, and other valuables.

Yesterday (March 25), 11 civilians were killed during violent crackdowns by the military and so-called police in the day. Civilians were also shot and killed in raids in some towns during the night time without reason. Last night in Dagon Myothit (South) Township, the military and so-called police raided the area and fired at least 300 live rounds, one civilian was killed and ten civilians were injured, and at least 20 civilians violently arrested. In addition to this, they destroyed Wifi and phone line cables. In Tamu Township, Sagaing Region, one civilian was killed and nine civilians injured, three were put in critical condition.

On the evening of March 25, Kyauktaga Township, Bago Region, when the police and military vehicles  entered a village, the villagers fled into the fields. The junta followed and shot them, resulting in one man seriously injured who died today, and three others were arrested. During the crackdown in Mohnyin Township yesterday, one man who was seriously injured died today.

The illegitimate military regime’s terror, even against children, is intensifying. Last night in North Okkalapa Township, Yangon Region, the military and so-called police raided a nursery school and destroyed equipment, and stole two computers. On the night of March 21 in Kalay Township, Sagaing Region, while a 14-year-old boy was driving a motorcycle, he was hit from behind by a military vehicle and then shot and taken away. Per available information, the child is suffering from a broken arm, and leg. He is in critical condition.

Arrests and detentions of the injured currently being treated in hospital, demonstrate their brutality. Yesterday, the military and so called police came to Sanpya Hospital and arrested four people who were receiving medical treatment from gunshots in a crackdown in Thingangyun Township. They arbitrarily arrested these four people and threatened the health workers who asked the junta to not detain the four. The junta forces threatened the health workers that they have permission to shoot those who try to stop them making arrests.

Article 14 of the Geneva Convention enshrines the protection of children, injured people, and hospitals and nursery schools as safe zones. However, as this military  junta is using force and violence to break any laws.