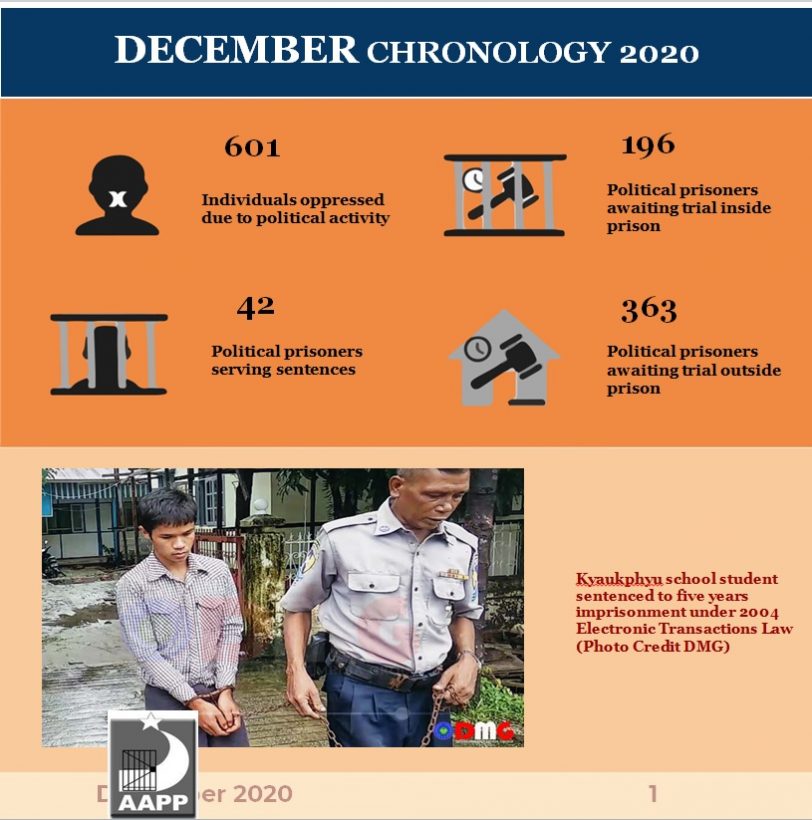 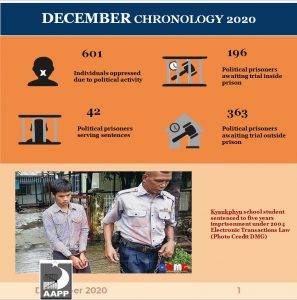 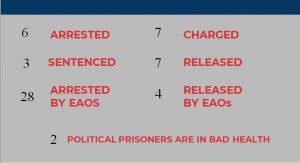 December 10 is the International Human Rights Day, unfortunately in Burma the human rights situation has not improved and is deteriorating in many ways. The essence of democracy fades when the exercising of basic human rights is limited. In addition, the continued existence of political prisoners, internal conflicts have not yet ended, political activists, farmers, workers, students and civilians continue to fight for basic rights, the repression of these individuals and groups hinders national reconciliation. On the day of the International Human Rights Day, the Assistance Association for Political Prisoners (AAPP) urges the government to uphold the genuine human rights of its people.

Analyzing the year of 2020, freedom of speech and expression in Burma has declined month on month.  Failure to protect basic rights indicates that human rights will continue to be restricted and is a worrying situation. Freedom of speech and expression must be promoted and enhanced so that it can be exercised unhindered. Instead, arrests, charges, imprisonments undermine the transition process. Therefore, measures must be taken as soon as possible to enhance freedom of expression under the new government. Laws which are used as a tool to oppress those who are exercising this right must be amended without delay. The essence of democracy can be restored if such measures are achieved.

Since the general election, conflict in Arakan State between the military and the Arakan Army (AA) has subsided, there were no armed clashes between the two forces in December. The military and the Arakan Army met for negotiations in the Wa capital of Pangsang on December 9. This marks the end to two years of fighting in Arakan State and shines a ray of hope for peace. On the other hand, torture and arbitrary imprisonment continue to occur. The following incidents in December show:

Even though ethnic peoples were expected to be safe in part because of the absence of armed conflict, their safety and freedoms remain cause for serious concern as a result of past conflict. Therefore, we urge the government to implement serious peace as soon as possible and focus on national reconciliation to prevent serious human rights abuses against ethnic minorities.

Justice for disappeared people in Arakan State is a long way off. There is as yet no information regarding 21 villagers from Tinma Gyi Village and Tinma (New) Village from Arakan State’s Kyauktaw Township, who have been missing since March 16. Reportedly they were arrested by 55th Division stationed at Taung Shay Mountain near the village. The families of the missing villagers reported the disappearance to the Kyauktaw Myoma Police Station in March and December, but no case was filed and on December 29, the Mrauk U District Police Station testified three eyewitnesses were released after being arrested. Maj-Gen Zaw Min Tun maintained the military does not know anything about the arrests at a press conference on December 30. Hla Myint, chairman of the Myanmar National Human Rights Commission (MNHRC), said his office has declined a request by concerned lawmakers from the area where the villagers were abducted because he and other members of the body accept as truthful a Ministry of Defense statement on Oct. 22, denying the military had arrested and detained the civilians. Article 3 of the Universal Declaration of Human Rights (UDHR) and Article 9 of the ICCPR state “everyone has the right to life, liberty and security of person”. These villagers not only lost these rights, but also access to justice and a complete lack of responsibility and accountability against the perpetrators. AAPP therefore urges an immediate free and fair investigation into the missing villagers, with respect human dignity, and recognizing the value of human existence by promoting human rights.

Based on documentation by AAPP, from January to December 2020, the number of political prisoners continued to rise month on month. The increase is primarily due to workers and students activists, land disputes and confiscation, internal conflicts and peaceful protests. AAPP’s moto is ‘there can be no national reconciliation as long as there are political prisoners’. Therefore, on the occasion of the New Year, we urged the government to unconditionally release all incarcerated political prisoners and those who are facing trial inside and outside prisons for the sake of national reconciliation.