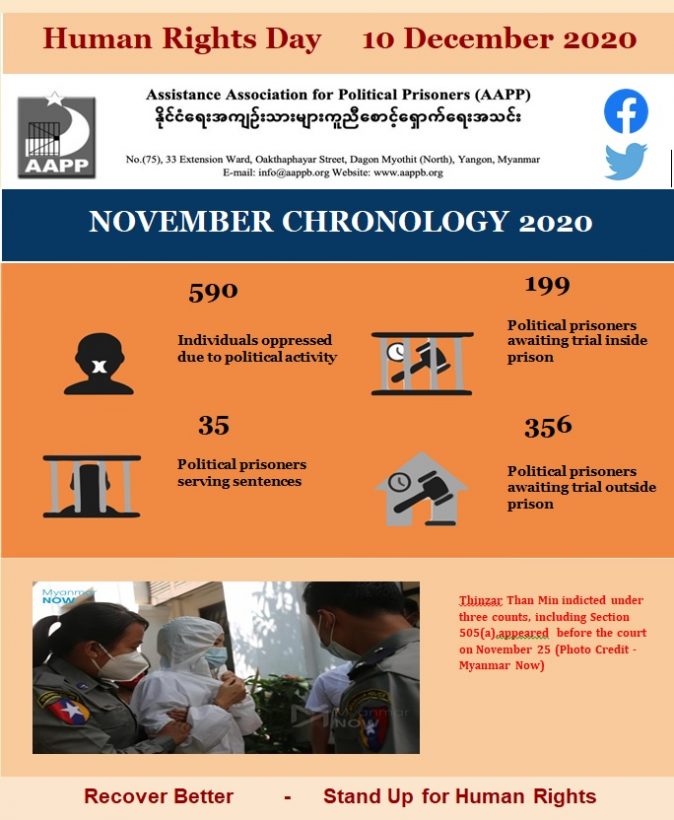 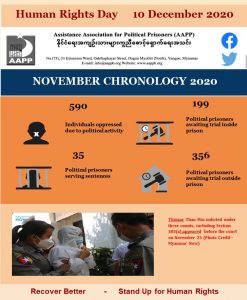 On 8 November multi-party general elections were held, the Assistance Association for Political Prisoners (AAPP) observed the landslide majority given to the National League for Democracy (NLD). The NLD sent an open letter to 48 political parties, including 10 Rakhine-based political parties on November 12, inviting them in cooperation to achieve what it maintains are their shared goals, including the establishment of a federal union. AAPP welcomes this positive development as the role of all ethnic groups is vital for the emergence of a federal union and peace process. We urged the newly formed government to consistently work for national reconciliation, including political prisoners, land, labour and student issues and to set up the concrete foundation of the basic human rights for all people.

Disputes and constraints in relation to the election in November were:

These are worrying developments and AAPP urges an immediate investigation to prevent similar incidents in future elections. In addition to this, newly elected MP Htike Zaw in northern Shan State was shot dead by unidentified armed men at his Pin Tain village home in Kyaukme Township. This rejection of politics, and instead resorting to violence is unequivocally condemned and we urge immediate action to be taken aganist the perpetrators of this crime.

The situation of freedom of speech and expression in November has not improved and continues the decline of previous months, with the repression of those who exercise these fundamental rights persisting. Htet Aung, vice-chairman (2) of ABFSU, and Kyaw Ye Thu, vice-chairman of Pyay University Student Union, were sentenced to one year imprisonment under Section 505(b) of the Penal Code, Thinzar Thanmin living in in Infantry Battalion No.235 in Magway Region’s Pakokku Township was indicted by the Pakokku Court under Section 505(a) of the Penal Code. Moreover, Zeyar Lwin, member of a Peacock Generation Troupe, and Nay Win Aung living in Kyar La Har Village in Bago Division’s Waw Town, were charged under Section 66(d) of the Telecommunications Law.

Freedom of speech and expression must be enhanced whilst Burma is undergoing its democratic transition, yet this right continues to be restricted just as the military dictatorship similarly silenced dissidents. If the basic right to freedom of speech and expression cannot be protected, other basic rights will recede. The lack of amendments to Section 500, and 505(a)(b) of the Penal Code, Section 18 and 19 of PAPPL and Section 66(d) of the Telecommunications Law has led to these arbitrary arrests and lawsuits. Therefore, we urge the government to immediately and unconditionally release all those who are arrested, charged and sentenced for exercising this right, to sign and ratify the International Covenant on Civil and Political Rights (ICCPR), to respect and follow the Universal Declaration of Human Rights (UDHR) that protect these rights and repeal and amend the repressive legal framework promoting repression of freedom of speech and expression.

Though the conflict in Arakan State has subsided since the election in comparison with previous months, arrests, charges and torture have continued. Some November incidents of human rights abuses in Arakan State were:

Armed clashes have been ongoing in Arakan State for almost two years and ethnic peoples continue to suffer its devastating effects. A statement issued by the Office of the Commander-in-Chief of Defence Services the day after the election stated that the Peace Talks Committee of the Tatmadaw (Military) had been formed. There is an urgent need to continue these peace talks, the election has successfully been held but  COVID-19 remains.

The new government should work for national reconciliation to achieve true peace. Moreover, the Convention against Torture and Other Cruel, Inhuman or Degrading Treatment or Punishment (UNCAT), which the Assistance Association for Political Prisoners (AAPP) has repeatedly urged, must be signed and ratified.

It is also worrying that human rights abuses by law enforcement continue in Burma. On the night of November 23, three policemen wearing plain clothes took civilian Chit Ko Ko, living at 87 Ward of Rangoon Division’s Dagon Myothit Seikkan Township, to Police Station No.2 in Taketa Township. While Chit Ko Ko was  being interrogated for alleged involvement in the riots at a bakery near his bike shop, he was beaten. The Code of Conduct for Law Enforcement Officials prohibits torture.

Torture should not be openly tolerated by any law enforcement organizations, torture should never be openly exercised. Plans must be made to prevent further offenses and those working for law enforcement organizations should be provided human rights and prevention and protection of torture training. In doing so AAPP urges the government to promote the dignity of living and security of all people.