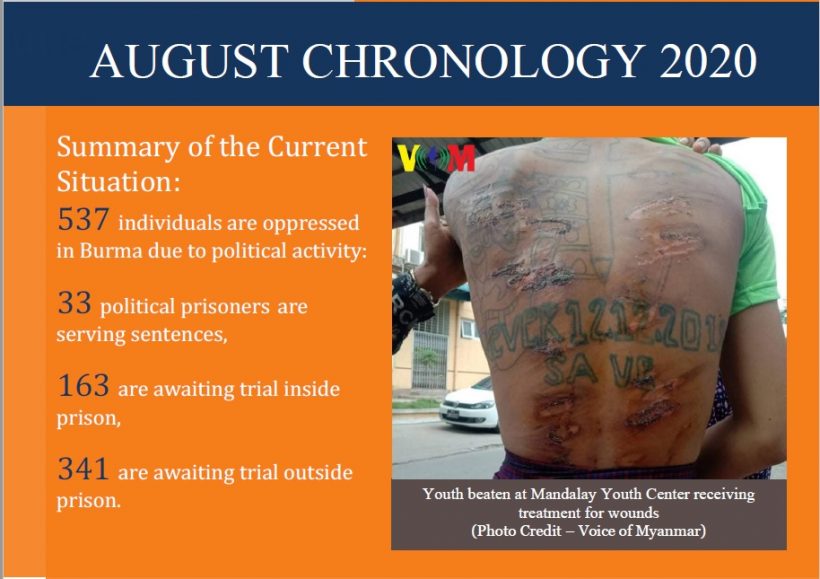 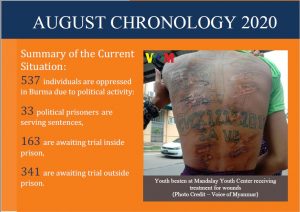 It was 32 years this month since the 8888 uprising also known as the People’s Democracy Movement began on August 8, 1988. However, Burma is still struggling for democracy, peace and national reconciliation. Moreover, the civil war continues as ethnic issues have not been addressed. Today, activists, students, farmers, workers and civilians still face oppression and restrictions from all sides. In various situations human rights are on the verge of eradication. Accordingly, to fulfill the hope of democracy that began 32 years ago, the key to the reform process is through the protection and promotion of human rights, immediate cooperation with the peace process, amending and repeal oppressive laws, draft and enact laws to promote the rights of citizens, the unconditional release of political prisoners, those who are facing trial inside and outside prisons must be carried out as soon as possible. For these reasons, we urge the government to take immediate action in each sector for the benefit of its people.

This is in contrast to an amendment recently approved by the Union parliament Upper House in July and by the Lower House on August 20 to the 1959 Defence Services Act. The original provision in the act allowed the court martial three years to make a decision, thereafter three years a civilian court is able to make a decision. However this recent amendment takes this power away from the civilian court, after three years no court is allowed to handle the case.

By evaluating the above cases, the extent of the freedom of speech and expression of Burma is found to be deteriorating. It is the responsibility of the government to implement improvements to the situation of freedom of speech and expression in the country. Legally, the government must ratify and sign international treaties which guarantee these rights, provisions must be arranged to systematically guarantee this. The government must simultaneously cooperate with civil society organizations (CSOs).

Conditions of Prisons and Cells

Conditions in prisons and cells across Burma have not  significantly changed this month. It is especially worrying that the use of torture and other forms of confession and punishment continue to this day. In August, two youths died after all five were beaten after being detained at Mandalay Youth Center having attempted to run away from the center. One of the youths is currently receiving medical treatment. According to police officials, the case was filed as a murder case and five suspetced staffs of the center was arrested and being investigated in relation to the deaths. In addition to this, a man, who was detained at the Myin Ka Kone Police Station in Bogalay Township in Ayeyarwaddy Division, died with injuries over his body in police custody. Tun Shwe of the Division Police Head Quarter said they will investigate police station officials for the death by organizing a district-level tribunal. We welcome the ongoing actions and urge these to be transparent. Torture is a disrespect to human dignity and an abuse of power. Articles 2 and 5 of the Code of Conduct for Law Enforcement Officials state that “law enforcement officials shall respect and protect human dignity and maintain and uphold the human rights of all persons and protect from the torture. Torture affects not only physical and mental health but also reconcilation with the community after release. Measures must be strictly taken to prevent the recurrence of torture in prisons and cells. Moreover, awareness of human rights education, International Covenant on Civil and Political Rights (ICCPR) and United Nations Convention against Torture(UNCAT) must be provided to the relevant officials. Perpetrators must be brought to justice with effective action taken against them.

Deterioration of Civil and Political Rights

These various incidents in August detail the deterioration of civil and political rights across Burma.

Civil rights include ensuring peoples’ physical and mental integrity, life, and safety; protection from discrimination on grounds. Political rights include natural justice (procedural fairness) in law. There is no denying that these rights are restrained in Burma. If a government is able to bring the civil and political rights in a country, it can be described as a democratizing government. As the implementation of the civil and political rights in Burma is the essential process in transition, we urge the government to work for it as soon as possible. Furthermore, we urge the government to ensure that the indigenous peoples living in conflict areas do not lose their right to vote.