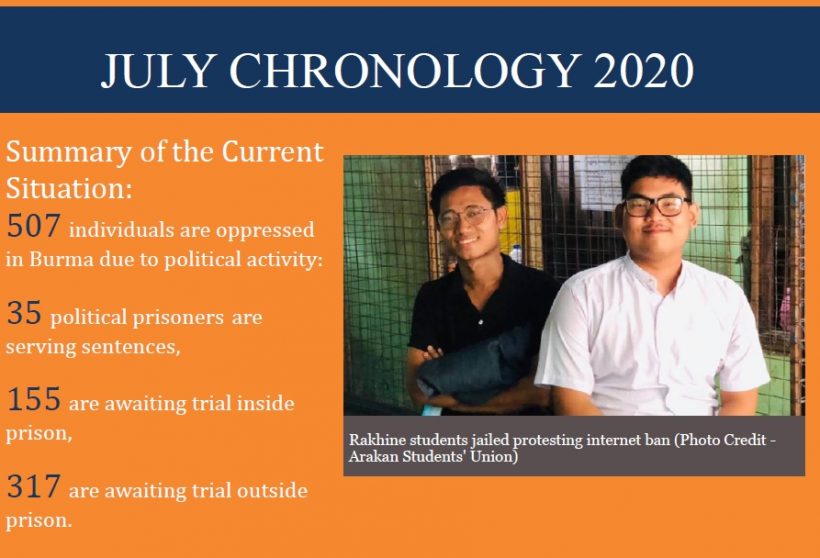 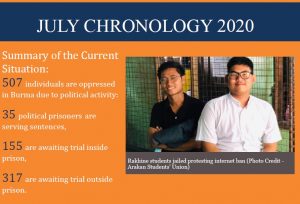 Furthermore, Burma’s judicial system needs to be reformed as soon as possible. With prolonged trials defendants face lengthy trials in cases prosecuted by the authorities and most are sentenced to imprisonment, colonial era laws, and new laws cracking down on dissent are reasons for the urgent need to reform the Burmese judiciary. There is an urgent need to promote human rights, democracy, and reform the judiciary. AAPP urges the repeal of undemocratic laws and the re-establishment of the Ministry of Justice.

In July, armed clashes intensibied in ethnic areas. Especially in Rakhine State, as bighting between the Military and the Arakan Army (AA) escalates, attacks targeting ethnic people are also getting worse. Arrests and abductions; disappearances; charges; torture; shootings and artilery; and landmine explosions; are all a manifestation of serious human rights abuses in the ongoing armed conblict. In addition, sexual and gender-based violence (SGBV) is a daily horror against women.

With the outbreak of conblict, threats against unarmed civilians and sexual violence is an ongoing human rights violation. On the night of June 30 a 37-year-old local woman was raped by three soldiers in Uga village, Rathedaung Township, Rakhine State. They also tried to rape her daughter. The Tatmadaw’s True News Information Team denied the allegations. On July 10, the victim biled a lawsuit against the three soldiers. Article 8/2 of the Rome Statute of the International Criminal Court states that “rape or any other form of sexual violence is a serious violation of the Geneva Convention.” Prosecution of the perpetrators is a way to bring justice to the victim. Therefore, AAPP urges that the perpetrators be punished as soon as possible.

In addition to this, two soldiers from the military’s Light Infantry Battalion 409 shot Naw Mu Naw to death at her home in PoLo Hta Village, Dweh Lo Township, Papun District, Karen State and stole her jewelry. The Tatmadaw True News Information Team said two soldiers were sentenced to the maximum sentence, but have not released any details of the sentence. Transparency is crucial, human rights abuses committed by the authorities often result in impunity. If accountability is the aim, justice must be provided to the victim.

In July, women continued to be arrested on suspicion of relation to ethnic armed groups and detained whilst the cases were ongoing. This a serious lack of respect for human dignity. In Kyaukphyu Township, Rakhine State, Byar Ma from Yenan Dwin village, Hla Than Khin, and Min Min (Khin Myo Swe) the owner of the Yadanar Aung Theater, were arrested on suspicion of providing food to the Arakan Army (AA) and charged under Section 50 (j), and 52(a) of the Counter-Terrorism Law. Currently in Rakhine State, up to four women have been arrested and charged on suspicion of having links with AA.

Article 15 (1) of the Convention on the Elimination of All Forms of Discrimination against Women (CEDAW) declares that “States shall guarantee that women are equal before men under the rule of law.” AAPP, therefore, urges the government to take steps to ensure that these women receive a fair trial. We also call for action to ensure the full security and protection of local women living in areas where armed conblict is taking place.

Decades of persecution in Burma continue, to this day the lack of responsibility and accountability has meant no one has been able to prosecute the perpetrators of torture. In July, two locals from Zin Chaung village, Kyauktaw Township, Two locals from Apaukwa village, Kyauktaw Township, and a villager from Parr Taw Village, Mrauk-U Township, who were arrested and released by the Military, and a local from Pauktaw Palaung village who are facing trial in prison, were tortured. A man from Alegyun village, Ramree Township, who was arrested by the military on July 11 and detained at Ma-Ei Police Station, hanged himself whilst in detention. The man had injuries from the torture and gunshot wounds. He hanged himself while being interrogated at Ma-Ei Police Station in Taungup Township, but Taungup Township Police Chief Than Naing denied that the man was killed at Ma-Ei Police Station. Body parts of a civilian from Pikethae town, Kyauktaw Township, who was arrested by the Military, were also found. The body of a 60-year-old villager who was allegedly shot dead by the military, was discovered in a latrine in the compound of his home in Chainkharli village, Rathedaung Township.

These are serious human rights violations which are the result of armed conblict and war crimes against humanity. Article 6 of the Body of Principles for the Protection of All Persons under Any Form of Detention or Imprisonment states “No person under any form of detention or imprisonment shall be subjected to torture or to cruel, inhuman or degrading treatment or punishment.” However, Burma still fails to adhere to and ratify domestic and international law. AAPP urges the government to implement the peace process as soon as possible without delay, as indigenous peoples are the most affected by the prolonged armed conblict.

Human Rights Abuses by the Authorities

Authorities are responsible for protecting the property and security of citizens. However, in Burma, these remain a great vulnerability. In July, some 200 locals protested against the planned construction of a checkpoint near Myakone village, Palae Town, Sagaing Township, conblict occurred between 50 local police and three locals were shot with rubber bullets. One of the three locals was taken to hospital with serious injuries. According to Article 5 (b) of the Basic Principles on the Use of Force and Firearms by Law Enforcement Ofbicials, “Minimize damage and injury, and respect and preserve human life.

Therefore, authorities in Burma must ensure that citizens are not harmed in any way. Armed conblict is not the way to reduce conblict, AAPP urges for a negotiated solution as the best solution.

Farmers continue to be neglected in one of Burma’s key agricultural sectors. There are various land disputes in Burma and local farmers affected by land conbiscation are offered little protection. Instead, they face oppression. There have been legal shortcomings in many cases biled by the military. Infantry Battalion No.66, based in Kholam Township, Loi Lin District, Southern Shan State has sued 47 landowners but failed to attend court hearings four times . This is causing much grievance to the farmers involved. The COVID-19 pandemic also means farmers have to follow the government’s order to not crowd and must protect themselves from the pandemic. Some farmers are elderly and sick and due to the current planting season, they requested the court for permission to have bive farmers as representatives. On June 29, the Namhsan Township Court rejected this, but the court accepted it on July 21. This is a worrying situation for farmers, who have lost their land and are struggling to make a living, and justice is still a long way off. Therefore, the government needs to address the issue of conbiscated land and land disputes as soon as possible. AAPP urges the immediate and unconditional release of farmers who are being arrested, charged and prosecuted.