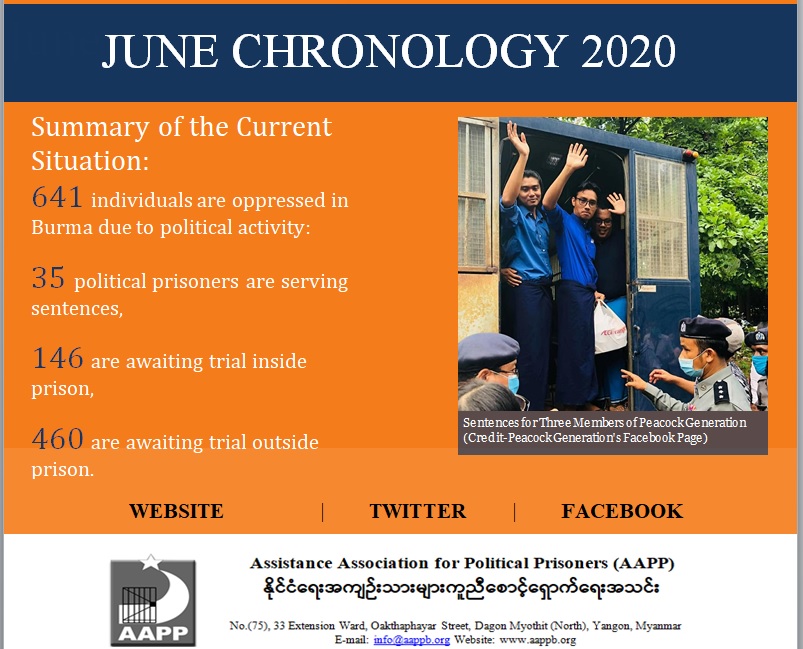 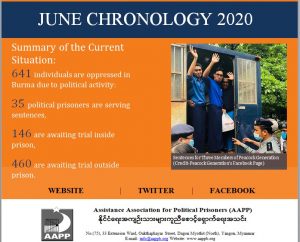 Limits on freedom of speech and expression remain a fundamental challenge to the democratic transition in Burma, these are important human rights essential for any successfully democratic society. In June this year, Burma experienced its worst recent month in this deteriorating human rights situation. This month three members of the Peacock Generation group were sentenced at Dedaye and Maubin Township courts under Section 505(a) of the Penal Code for exercising freedom of speech and expression. In addition to this, Myo Min Tun, the leader of the youth network from Ramree Township, Arakan State, faced fines under Section 19 of the Peaceful Assembly and Peaceful Procession Act.

New laws have been passed to prevent freedom of speech and expression, and are used in tandem with out-dated colonial era laws to limit freedom of expression and speech in Burma. This demonstrates how repression of our human rights will likely continue in the coming years. As long as our fundamental rights are continually oppressed through the law, people will only continue to lose their civil rights. Therefore, the government responsible for implementing democracy are encouraged to uphold these rights by adhering to a democratic standard of freedom of speech and expression.

Below is a graph of the data compiled according to the Assistance Association for Political Prisoners (AAPP) data for the six months from January to June 2020 of those arrested, charged, sentenced and released under Section 19 of the Peaceful Assembly and Peaceful Procession Act, Section 500, 505 (a) of the Penal Code, and Section 66 (d) of the Telecommunication law. 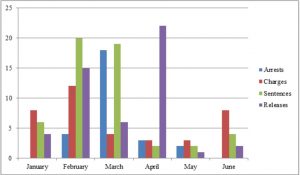 Land issues remain a challenge for Burma during this transition period, farmers continue to suffer disproportionately from the effects of land disputes. During June, a total of 47 farmers were charged for planting and plowing on military land in Loilem Township, Nansand Township, and Kunlong Township in Shan State (South). Moreover, the military applied for an additional sentence against 22 farmers who have already been convicted of each offense. Farmers not only lost their ancestral land, these charges and prosecutions created further difficulties. On June 15, a press conference for the Fourth Annual One Year Anniversary of Government of the Union was held and the Deputy Minister for Ministry of Union Government stated that the confiscated land and more than 100,000 acres of land were given back to the original owners under the current government. However, many farmers continue to lose their land compared to the national average which brings particularly negative effects for the farmers involved. Therefore, the government must act promptly in resolving the land disputes without delay. In doing so, AAPP urges the government to promote and protect the rights and interests of farmers in accordance with The International Covenant on Economic, Social and Cultural Rights (ICESCR), Law of Protection of the Farmer Rights and Enhancement of their Benefits and Land confiscation, Resettlement and Recovery Act, as well as bringing justice for farmers who have been charged and prosecuted.

During June, armed clashes between the military and ethnic armed groups are intensifying, as are the repercussions for the indigenous peoples. In particular, as the conflict continues in Arakan State, arrests, prosecutions, disappearances, deaths, injuries, and intimidation rise. In June, due to the conflict between the military and the Arakan Army (AA) 56 civilians were arrested; they were from Sittwe, Taungup, Kyauktaw, Myebon, Minbya, Mrauk-U, Ponnagyun, Kyaukphyu and Rathedaung Townships in Arakan State. In addition to this, 16 civilians from Myebon and Kyauktaw Townships, Arakan State were charged under Section 50(e) and 52(b) of the Anti-Terrorism Law. Four civilians from Mrauk-U and Kyauktaw Townships also went missing in Arakan State.  These cases are extremely serious human rights abuses, and both sides need to engage in political dialogue in order to protect civilians from the conflict.

Based on information by AAPP from January to June 2020, below is a graph of arrests, charges, prosecutions, and releases in relation to conflict in Arakan State. 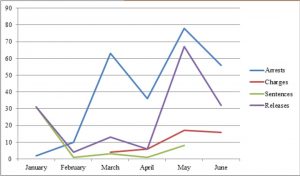 Various events during the month of June have left many civilians dead or injured. Civilian casualties are detailed below.

In addition to this, the lack of precautionary measures for indigenous peoples living in war-torn areas during the first six months of the COVID-19 pandemic is a serious concern. On June 22, a total of 170 countries signed on a statement supporting the global ceasefire requested by the UN Secretary-General António Guterres. All ASEAN members, except Burma, signed the declaration. This was an important step towards achieving national reconciliation, and Burma’s failure to sign the petition is a disappointment. It raises questions about the government’s commitment to the ongoing peace process. Therefore, AAPP urges the Government to put in place measures to prevent the spread of COVID-19 for indigenous peoples.

International Day in Support of  Victims of Torture

On June 26, we recognised the UN International Day in Support of Victims of Tourture. However, in Burma various forms of torture continue to take place across the country. During June, Thaung Tun, a resident of Myaingtharyar Village, Thabeikkyin Township was tortured and shot dead by two police officers while he was climbing up to the mountaintop with his friend Min Thu, who managed to escape with the handcuffs still on his hands. Furthermore, 11 policemen, one uniformed and ten without, arrived at the Shwe La Min  restaurant and beat the restaurant’s owner and threatened him with a gun. In addition to this, a civilian suffered severe injuries after being tortured by the military in Aakgyi Village, Kyaukme Township, Northern Shan State.

Torture continue to occur due to the lack of effective prevention and protection mechanisms. Hence, there is still a long way to bringing justice to its victims and providing appropriate rehabilitation. On June 26, AAPP released a paper calling on the government to sign the United Nations Convention against Torture (UNCAT). AAPP disscussed how UNCAT is a treaty which supports the effective ban on torture. Therefore, the AAPP again urges the government  to sign the UNCAT.