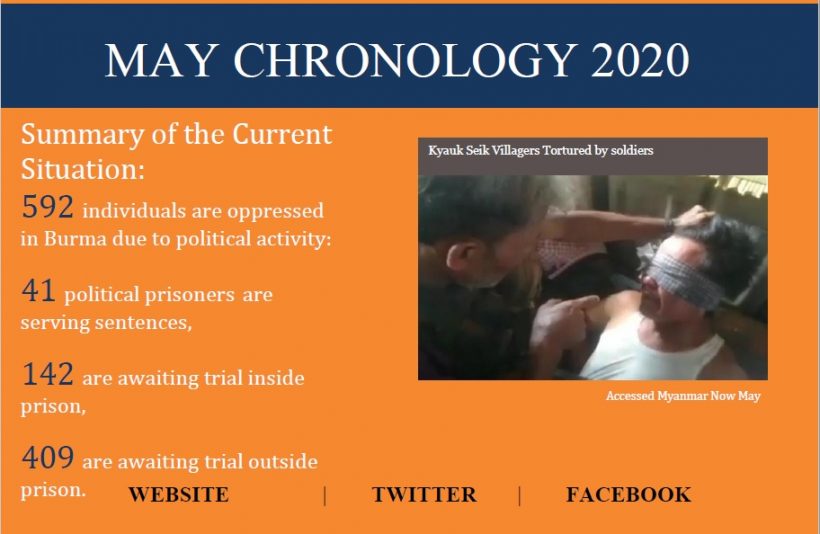 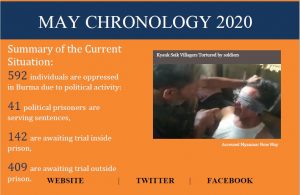 The situation for freedom of expression in Burma continues to deteriorate, and those exercising it are still facing oppression. During May, Shwe Ohn from Aungthabyay Village, Patheingyi Township, Mandalay Division was sentenced to three months’ imprisonment under Article 19 of the Peaceful Assembly and Peaceful Procession Act for exercising his right to freedom of expression. In a number of similar cases Kyaw Naing Win a.k. Saw Kyaw Naing Win, a lawyer for the People’s Party and two activists in Bago, Naing Naing Aung, and Lin Naing, were charged under Section 505 (b) of the Penal Code and Section 66 (d) of the Telecommunications Law. In addition, after one year since their initial charge Zayyar Lwin, Paing Ye Thu and Paing Phyo Min a.k.a Diye, members of Peacock Generation  charged under Section 505 (a) of the Penal Code, had their first court hearing.

In May, Tin Aung Moe, who was assisting at the health examining checkpoint of Pyinywar Village, was beaten and punched by Myat Ko, the deputy police chief of Pyin Village in MyaungMya Township, Irrawaddy Division. Relevant authorities are currently investigating the case. All authorities must respect human dignity and human rights. AAPP therefore strongly urges the government to take appropriate measures to prevent similar violations in the future.

Freedom of the Press

May 3 marked World Press Freedom Day, yet in Burma journalists continue to face obstacles and oppression. Freedom of the press in Burma is continuing to decline, and journalists are still under threat. Journalists are particularly in danger when reporting on conflict  between the military and ethnic armed groups. In Arakan State, where the military and the Arakan Army (AA) are fighting, journalists from local and international media are having trouble getting information. local media  in particularly seldom receive an answer in response to a request for information from relevant departments, including the government. Zaw Ye Htet, a Hpa-an-based news editor, was sentenced to two years’ imprisonment under Section 505 (b) of the Penal Code for allegedly misinforming the public. Democracy requires a free press. He was sentenced despite apologizing to readers for posting inaccurate information. AAPP urges the Government to protect the independence of Burma’s media sector and provide justice for journalists who have been hindered and harassed for doing their job.

Prison conditions remain substandard. In May, one group of 10 prisoners and another group of four inmates had a fight with iron bars in Bago prison,which left two inmates injured. U Nyunt Shwe, a regional parliament speaker in the Bago Region’s constituency (1), said the prison staff were responsible for prisoners being able to be armed.

In May, armed clashes between the military and the Arakan Army (AA) continued unabated, and human rights abuses continued to deteriorate. During May, 76 local people were arrested and detained in the Arakan state alone.  57 out of the 76 residents were released but 19 were still detained. Furthermore, persecution remains a serious concern. The case of five Arakan men beaten by Burmese military on board of a warship, video of which was widely circulated on social media, caused much criticism. In response, the military announced that its security forces will be prosecuted under military law.

In areas of armed conflict, torture against humanity is a war crime. Articles 2 and 5 Code of Conduct for Law Enforcement Officials, and Article 6 of the Law provides for protection from torture under any form of detention or imprisonment. However, the inability to put an end to the armed conflict in both sides of the armed forces in Burma indicates that  these violations are still ongoing.

Moreover, as a result of the armed conflict in May, the deaths and injuries of civilians are extremely worrying. The following events are also disclosed.

Government’s respect for human rights is usually measured by respecting human rights standards, the protection of human rights abuses, and the government fulfills the requirements for every citizen to live with dignity. Therefore, AAPP urges the government, military and armed groups to end arrests, charges, prosecutions, tortures and deaths of civilians.